A referendum asks for property-tax increases to fund city parks improvements. Is it worth it? | 2019 General Election Guide | Pittsburgh | Pittsburgh City Paper

A referendum asks for property-tax increases to fund city parks improvements. Is it worth it? 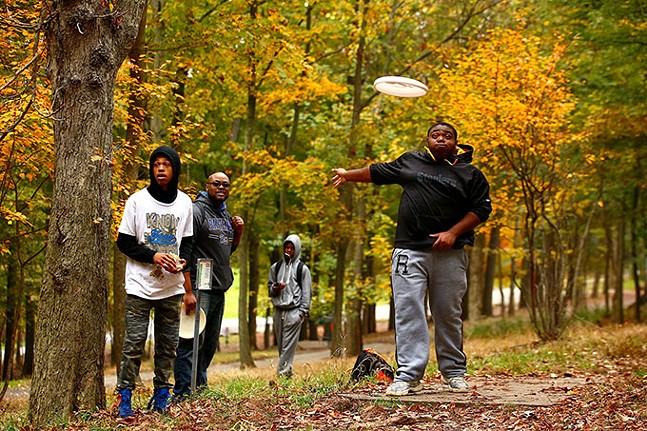 CP photo: Jared Wickerham
Quinton Moon, 16, throws a frisbee while playing disc golf with his classmates from Propel Andrew Street school while on a field trip at Schenley Park.

That’s how much Pittsburgh Parks Conservancy CEO Jayne Miller estimates is in the backlog for maintenance and projects at parks in the city of Pittsburgh.

Miller says city parks have gone relatively untouched for decades in terms of investment and have been allowed to deteriorate to levels that will require significant investment to return them to their former glory.

“The annual resources need to be greater regularly and going forward,” says Miller. “And the backlog, it is like a house that hasn't been taken care of for 40 years.”

To respond to this backlog, the Parks Conservancy has placed a referendum on this year’s ballot, asking that city property taxes increase half a mill in order to raise about $10 million a year in additional funds. (A "mill" is equal to $1 of property tax for every $1,000 in assessed value.)

The referendum has garnered support from Pittsburgh Mayor Bill Peduto and has raised more than $680,000 in financial backing from the Parks Conservancy and a local civic nonprofit to convince voters to back the property-tax increase. But the initiative has critics. Pittsburgh City Councilor Anthony Coghill (D-Beechview) has voiced opposition and some city council candidates are campaigning against it.

City Controller Michael Lamb thinks a tax increase isn’t necessary to fund the parks, noting a surplus in the city’s budget, but Miller says the city can’t dedicate enough each year to do what is necessary.

Luckily for Pittsburgh residents, this disagreement over what to do about the parks will come down to their votes on Nov. 5.

Miller says if the referendum is passed, the Parks Conservancy has established a plan on how to spend the $57 million ($47 million the tax increase plans to raise plus $10 million from the Conservancy). From 2020-2025, maintenance will receive 38 percent; rehabilitation, like new paths and replacing roofs at facilities will receive 20 percent; capital improvements will get 18 percent; programming will get 4 percent; and the remaining 20 percent will go to administrative technology and master planning initiatives.

According to Miller, this formula was derived from public input, as well as calculating 234 walk sheds (the area in which you can easily walk to a park) of Pittsburgh’s 165 parks.

“We counted poverty statistics, racial demographics, health and vacancy rates,” says Miller. “We want to understand what neighborhoods have the greatest needs. Parks make a significant difference in terms of addressing equity.”

Miller says anyone who owns property in the city will be paying an increase in property taxes, but that three-quarters of Pittsburgh homeowners will pay less than $66 a year.

This isn’t the first time Miller has supported a ballot referendum to raise taxes to increase parks’ funding. During her time in Ann Arbor, Mich., she oversaw a successful referendum in 2006 that increased millage rates in order to fund $5 million a year in ongoing improvements to Ann Arbor’s park system. The millage rates were extended in 2012, two years after Miller moved on to become superintendent at Minneapolis’ parks board.

But in 2016, Miller failed to get a referendum onto the ballot, which would have increased taxes to fund parks and roads. Minneapolis council decided instead to write legislation to increase city taxes and issue debt in order to fund $800 million of dedicated funds over 20 years. After the investment, Minneapolis became one of the top cities in the U.S. in terms of per capita spending on parks.

Miller believes Pittsburgh doesn’t have the budget to currently make this investment. She says the city doesn’t have enough extra revenue to cover the annual $33 million parks budget shortfall.

But controller Lamb recently reported the city budget is in relatively good shape. Pittsburgh’s revenue was up $29 million dollars in 2018 compared to 2017. Lamb told the Pittsburgh Post-Gazette in July that he expects a “significant surplus” in 2019, and said there is about $24.7 million in unspent capital funds from the last two year’s allocations.

Peduto’s office argued in the P-G that those capital dollars are dwindling and says there are too many projects to tackle just with current city revenue.

Miller maintains the best way to get necessary and long-term funds is through a referendum. 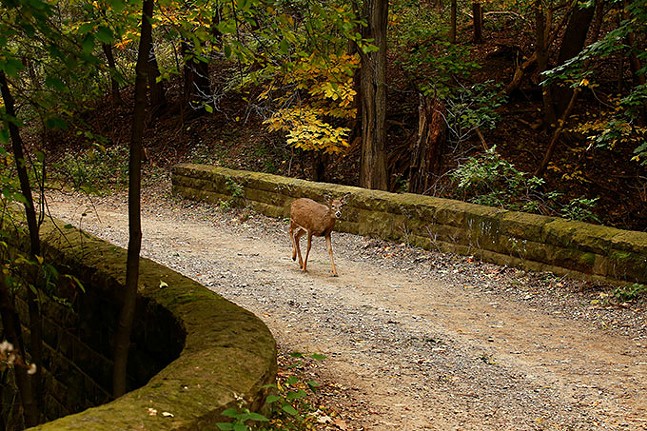 CP photo: Jared Wickerham
A deer crosses a bridge along the Bridle Trail at Schenley Park.

But funding concerns aren’t the only point of disagreement. In July, councilors Theresa Kail-Smith (D-West End) and Ricky Burgess (D-Point Breeze) shared concerns about potentially diverting money out of the city’s control and directly into the park’s conservation budget.

Pittsburgh Parks Conservancy is a public-private partnership. During its 10 years in existence, it has raised private funds in order to complete projects and programming at city parks.

Miller says City Council will still have a say in how the parks’ money is allocated to the conservancy. The legislation for the referendum states funds from the .5-mill increase “must be approved and set by the Council of the City of Pittsburgh each fiscal year.”

She adds that the intent of the referendum is to boost the Park Conservancy’s efforts, which typically generate between $7-8 million in private funding each year. Miller notes that if the referendum passes, City Council can authorize an agreement that will further spell out exactly how the funds will be spent. She relays the urgency of getting extra parks funding regardless.

"In the first six years, we have almost $33.6 million to spend on maintenance and rehab," says Miller. "If that money is deferred and not spent, those costs could go up to $168 million."