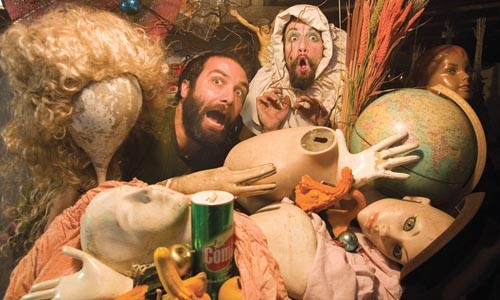 Alfred Jarry's Ubu Roi premiered in Paris in 1896. The play, about a would-be king at once cowardly and cutthroat, parodied the nobility of Shakespearean tragedy and commenced with a cry of "Merde!," Jarry's native tongue for "shit." A riot resulted (sadly, a rare occurrence in contemporary American theater) and Jarry and company were shut down by The Man (or, "le homme"). Bloody but unbowed, Jarry migrated to a puppet theater. A decade later, the revolutionary succumbed to alcoholism and tuberculosis.

Jarry met an untimely end; Ubu has thrived. A major influence upon surrealism and the Dadaists, the work remains inspirational for artists in a variety of disciplines. One is Thommy Conroy, whose adaptation Ubu Roi Is Here and Alive is part of the ninth annual Black Sheep Puppet Festival.

The festival has always drawn an array of performers local, national and even international. For this installment, called "Local No. 9," longtime organizers Tom Sarver and Mike Cuccaro chose only area performers, in order to unite the Pittsburgh scene for the 10th annual fest. Black Sheep -- based, as always, at the Brew House -- begins Fri., Oct. 19, with an opening reception. Troupes include such familiar faces as The Indicator Species as well as newcomers like Conroy. Ubu will be performed Oct. 26 and 27, as part of the fest's evening-length showcase.

"It's Godzilla meets a sideshow carnival meets our current president," says Conroy. "It's very crass and obscene and bloody." Conroy, an artist who runs Lawrenceville's La Vie Gallery (with owner Bronwyn Loughren), is a 2002 Carnegie Mellon graduate for whom Ubu marks a return to theater after a five-year hiatus. To stage this edited version of the play's original, five-act text, Conroy gathered (as The Ubuists) a bevy of theater artists, non-theater artists, non-theater non-artists, musicians and puppet-masters.

The revisionist title derives from photos Conroy viewed that proclaimed the specialties of various freak-show acts, along with an assurance of their mortal state: "[insert carny name here]...is alive!"

Jarry, doubtless, would have approved of the new staging. According to Conroy, the playwright believed that "the strongest scenery you could have in theater was the unpainted side of a backdrop and placards. He requested that the actors behave as if they were puppets."

Conroy began rehearsal just a couple of weeks prior to the opening, and had to balance his vision for the show with his desire to give collaborators (some 30 in number) room to incorporate their own visions. "It's lots of different artists working on their own little parts to create this giant machine," he says. The machine in question will include such elements as mannequins, finger puppets and root vegetables.

Conroy saw Black Sheep as his chance to do a show he's wanted to stage for several years. "It's been a wonderful opportunity to use the confines [of the festival] to define the production," he says. "They have this sort of mission to explore different forms of puppetry, and we're trying to push this idea of rethinking what makes a puppet."

Much like Jarry over a century ago, Conroy is also committed to rethinking what makes theater. Today's audiences have grown accustomed to sitting back and watching, without being actively engaged. Conroy refuses to spoon-feed viewers; he means Ubu to demand that audiences get involved.

"I think that's really what Jarry was getting at," he says. "They need to be put up to challenge." In this case, the challenge will include audiences reading cue cards aloud and joining in on a song, along with listening and thinking. "They'll have to participate," Conroy says. "I think that's the whole point."