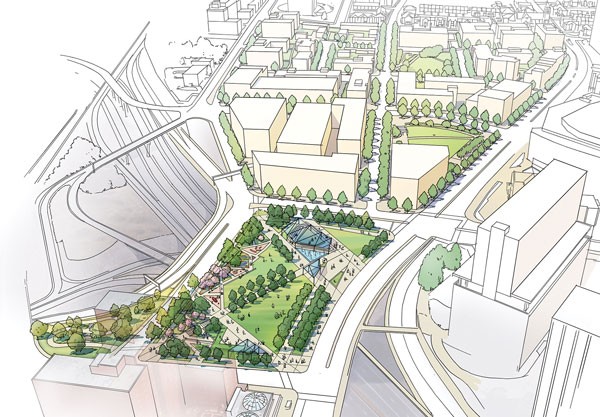 Image courtesy of the Sports & Exhibition Authority
Bad idea: LaQuatra Bonci Associates’ work-in-progress sketch of an aerial view of the proposed park to “cap” I-579 in the Lower Hill District

There are certain things we say so frequently about the destruction of the Lower Hill that they become almost ritual, and for many statements, the repetition is justified.  Misguided development displaced 8,000 people and destroyed 1,300 buildings on 28 acres. With a few wide but ghostly streets and no actual buildings currently going in, those facts are continually instructive about why we’ve had a mess for 60 years and why it’s taking so long to rebuild. Arguably, you can’t say them often enough.

But then there is the statement, “We need to reconnect the Lower Hill with Downtown.” In discussions about improving the fate of the Hill, and how to repair and rebuild, that assertion has emerged frequently. Specifically, it’s featured in the Lower Hill Land Development Plan of September 2014. The plan, produced with Urban Design Associates, LaQuatra Bonci Landscape Architects and Trans Associates Engineers for the city’s Sports & Exhibition Authority and Urban Redevelopment Authority, is essentially the guide to rebuilding the Lower Hill.

Unfortunately, we seem to have lost sight of what reconnecting really means. The timing is particularly unfortunate, because the SEA just received $19 million in federal funds to construct a concrete cap over the portion of I-579 between Centre Avenue and Bigelow Boulevard under precisely the premise of reconnecting the Hill with Downtown. Weeks earlier, LaQuatra Bonci had released a proposed design scheme for the park to be situated on that cap.

LaQuatra Bonci has led a multi-phase, open and responsive community process to develop its design, and the initial proposals present aesthetically pleasing and urbanistically useful elements. And prominent Hill figures including Pittsburgh City Councilor Daniel Lavelle and Hill CDC President Marimba Milliones have spoken in favor of the highway cap.

Unfortunately, the very premise of the highway cap does not hold up under scrutiny.

On one hand, the connection that’s sought already exists. You can already walk down either Centre or Bedford from the Hill into Downtown.

Covering a space between the two bridges with a big plane of landscape will be a slight improvement, but let’s be real. The great tangle of highways, compounded by the fortress-like remove of the USX Tower and Marriott City Center, mean that though it will always be possible to get there, it will always be dehumanizing, too.

The proposed park would look over the highway on two sides. On a third, it will face the unremitting Chatham Street wall of the Doubletree Hilton (with its own forlorn strip of greenspace). On the fourth, it will face a still-undeveloped parcel of the Lower Hill for which, someday, maybe, there will be a building, across the daunting intersection of Washington Place.

If you were teaching urban design to fourth-graders, you would tell them that the more long blank walls, fast roads and inaccessible garages you have surrounding your public space, the less successful it will be. Somehow, Pittsburgh’s great minds of urban design have lost sight of this handy rule and insisted on a new park in a place with astonishingly bad connectivity.

Also, it looks really bad to secure $19 million to build open concrete space next to your already vast open concrete space when your affordable-housing component in the nearby Lower Hill is stalled because of insufficient funds. Granted, one is a federally funded highway project, and the adjacent property is being developed separately by the Penguins. But the appearance is shameful.

Meanwhile, two instructive developments are progressing in the Hill, east of Crawford Street, away from the Penguins development site. The August Wilson House is undergoing a substantial renovation as a small arts center. Already, a production of the famed playwright’s Seven Guitars is being staged in the backyard of the house, where it is actually set.

Around the corner, the August Wilson Park reopened on Saturday. Formerly Cliffside Park, the small neighborhood greenspace with playground equipment and a majestic view over the Allegheny is already in use.

Both of these projects are notably smaller and less costly than the highway cap. Both are demonstrably effective now, with an emphasis on people already in place. Both derive from understanding what communities and resources in the Hill really are.

The real reconnection that needs to take place is of the Hill with itself. This is the gist of the 2009 Hill Greenprint, sponsored by groups including the Hill House Association and the Hill District Consensus Group. It’s also the implicit goal of a variety of groups and organizations at work on projects east of Crawford Avenue every day.

The biggest tragedy of the highway cap is not simply that it will be hugely ineffective, though that will be true. The problem is that in the name of reconnection, it actually directs resources away from the Hill, not toward it, where much smaller sums seem to produce compelling results much more efficiently.