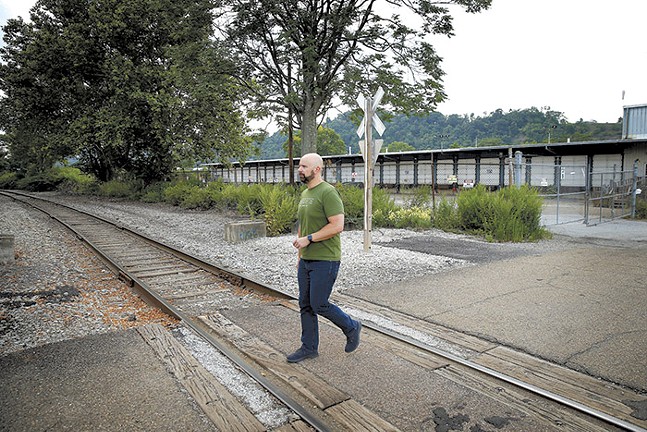 CP Photo: Jared Wickerham
Justin Rossini walks by the proposed Amazon warehouse near his home in Lawrenceville.
As Lawrenceville’s business district has grown and the neighborhood has gentrified, it has faced issues with housing, traffic, and pedestrian and bike safety, especially along Butler Street. Residents and community groups are trying to address these challenges and have created projects for the future, but many are worried that online retail giant Amazon has different plans for Lawrenceville.

Amazon announced in December 2020 its intention to develop the old Sears outlet warehouse on 51st Street into a last-mile distribution center in Lawrenceville, part of an attempt to speed up deliveries by opening stations closer to their final destinations. In April, PennLive reported that Amazon planned to open eight new last-mile facilities in Pennsylvania in 2021.

Community groups have worked for years to develop and implement improvement plans for the neighborhood, but Amazon’s proposal could add more than a dozen long-haul trucks, scores of delivery vans, and hundreds of employees likely driving in and out of the neighborhood.

These plans could disrupt the vision that community stakeholders have been working on for years. Community groups already have plans to attract more pedestrians to the business district near where Amazon wants to bring scores of delivery vehicles, which could compound their goals of lowering the number of cars into the neighborhood and making it safer for cyclists and pedestrians.

On top of that, advocates say Amazon has provided little communication or transparency about its potential effects on traffic, labor, housing, and pollution in the neighborhood, despite residents and community groups citing those as primary concerns. It’s unclear exactly when, and if, Amazon will move forward with the proposal, but community members hope for some say in the process, and many worry about the precedent this center could set for Amazon’s community relationships in other mixed residential, commercial, and industrial areas.

“We're not viewing this as kind of a NIMBY issue or, like, ‘We don't want it in Lawrenceville, it can go somewhere else,’” says Lawrenceville Corporation executive director Lauren Connelly, citing the acronym for ‘not in my backyard.’ “It’s really bigger than that. And there are some significant concerns around the impact as compared to any part of our city.” 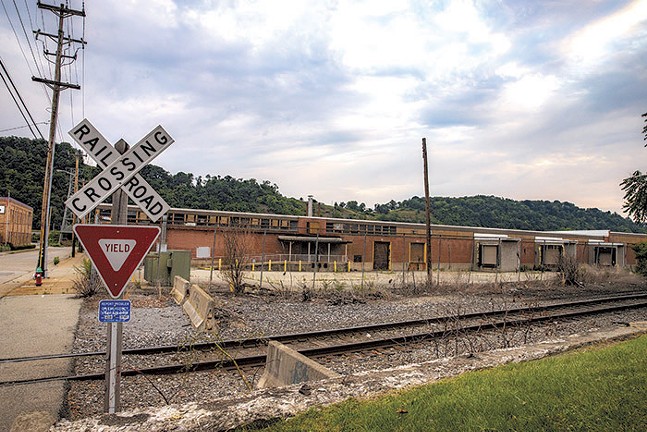 CP Photo: Kaycee Orwig
The former Sears outlet and site of the proposed Amazon warehouse
The proposed Amazon delivery center would stretch between 51st Street and McCandless Avenue, near the Allegheny River in Upper Lawrenceville. While Amazon initially expressed interest in 130,000 square feet of the former Sears warehouse, which would have been half of the space, in December 2020, the company confirmed it would be looking at taking all 260,000 square feet. The company has also expressed interest in adjacent land parcels for surface parking. According to Lawrenceville Corporation, initial proposals for the Amazon facility include 100-300 full-time jobs and 200-450 part-time jobs, and plans to utilize 12-20 long-haul trucks between 10 p.m.-6 a.m., as well as 75-150 delivery vans between 10 a.m.-8 p.m. that would deliver items to customers within a 40-minute radius of the site.

Most new development can require several permits and applications before construction, but Amazon claims the location’s prior use as a warehouse gives the company by-right use of the space under Pittsburgh’s zoning codes, meaning they don’t need to seek a zoning variance. This also makes it more difficult for groups such as Lawrenceville United and the Lawrenceville Corporation to know what Amazon is planning.

“We don't know if there's a new property owner in the mix. We also don't know what the lease terms are that Amazon has, we don't know how long their lease is for, or what any of those terms are,” says Connelly. “We've asked those questions.”

Although the company has not shared specific details about its exact plans, some believe that Amazon’s usage plans could require permits or zoning approvals, which in turn would require public hearings where community members would be able to voice their opinions.

The former Sears site is currently owned by Spear Street Capital, a California-based property management company. Lawrenceville United and the Lawrenceville Corporation previously worked with Spear Street Capital, which initially purchased the warehouse with the intention of redeveloping it into office space, and to establish commitments to mitigate their impact and benefit the community. Both groups say Amazon, other than committing to a waterfront trail, has not collaborated with the Lawrenceville Corporation or Lawrenceville United to ensure that their plans can still come to fruition.

“The community has expressed huge concerns about Amazon’s treatment of its workers and its local hiring commitments, the disregard for community plans, the impact on traffic, air quality, our small business community, and the environment, and Amazon's apparent lack of willingness to date to consider mitigation strategies and community benefits,” says Lawrenceville United executive director Dave Breingan, who encourages residents to reach out to Lawrenceville United, a nonprofit community organization.

Amazon has also hosted at least one community meeting, including one on June 1 to take in community feedback. The company has also met with local politicians like Pittsburgh Mayor Bill Peduto and city councilor Deb Gross, who represents Lawrenceville.

Amazon spokesperson Steve Kelly pushed back on the idea that an Amazon facility in Lawrenceville would hurt the neighborhood.

“Amazon is a global business with local roots set firmly in the communities in which we live and work," says Kelly in a statement. "We provide good jobs to local workers at our facilities, providing $15 per hour, comprehensive benefits, paid leave, and a diverse and safe work environment. Amazon is also committed to building an environmentally sustainable business to ensure we are doing our part to support our communities and reduce the impact of climate change on future generations. That’s why we have committed to powering our operations with 100% renewable energy by 2025 and intend to have 100,000 electric vehicles on the road by next year.”

After the community meeting Amazon hosted on June 1, Lawrenceville United and the Lawrenceville Corporation sent Amazon the previously mentioned follow-up letter listing community concerns and questions. The letter included requests for an environmental impact study and a traffic impact study, as increased road usage from delivery vans throughout the day and long-haul freight trucks at night creates concerns about safety for pedestrians and bicyclists in the area. The organizations say they have yet to receive answers to their questions.

At the June 1 meeting, Amazon disputed the idea that traffic would be made worse by the addition of the facility and committed to completing a traffic impact report for the proposal.

“It can be really difficult to cross a lot of intersections, especially at Butler Street, especially if they don't have pedestrian signals on them. People often don't yield, trucks have trouble seeing pedestrians,” says BikePGH advocacy director and Lawrenceville resident Eric Boerer. “So we just need to do whatever we can to make sure that the intersections that are going to see increased truck traffic, especially, are going to be as safe as possible with pedestrians in mind.” 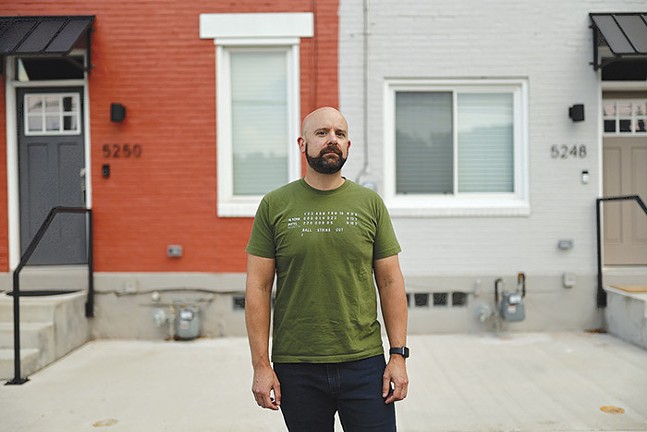 CP Photo: Jared Wickerham
Justin Rossini near his home and the proposed Amazon warehouse in Lawrenceville
For Lawrenceville resident Justin Rossini, the stretch along McCandless is of particular concern. Rossini lives on Harrison Street between 52nd Street and McCandless Avenue, the latter of which Amazon plans for its vans and trucks to use going to and from Butler Street. McCandless, however, is a wider street, which Rossini says many people treat “like a drag strip,” and he worries such behavior may be exacerbated by an increased amount of vehicular traffic from Amazon.

“[Amazon] kept beating home the point that like, ‘Oh, this stuff is only going to happen, you know, between rush hours, between the morning rush and the evening rush.’ And I'm here during the day. ... It’s not like Lawrenceville is a dead zone, anyway, during the day,” Rossini says. “There's a lot of traffic during the majority of the day and adding an armada of Amazon delivery vehicles coming in and out at all times, it’s gonna make it a lot worse.”

Rossini also worries about side streets, like the one he lives on, becoming an unofficial part of Amazon drivers’ routes or parking lots — or, as traffic from Amazon vehicles increases, other drivers using side streets as a way of avoiding Amazon’s traffic.

The Lawrenceville Neighborway, a collaboration between BikePGH and the city, also utilizes side streets to create a safer alternative for cyclists and pedestrians. Bike Pittsburgh promises that those who use the neighborway will face less vehicular traffic than they would encounter on Butler Street, but if Amazon’s approval comes to fruition, that may change. Construction on the Hatfield Connector, which extends the trail from 50th Street to 51st Street, finished in July 2021, and now overlaps with where Amazon’s proposed vehicle traffic would have some of its highest volumes exiting and entering the distribution center.

“We just know that an increase of employees down there is going to increase a lot of bad driving habits. So we just don't want to see it negatively affect a lot of the work we put into the neighborhood,” says Boerer. 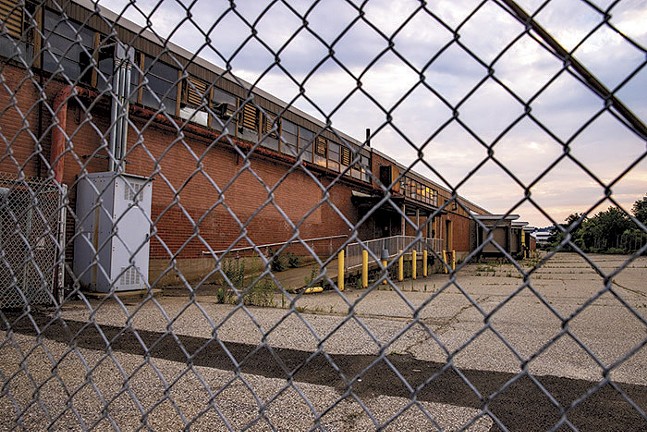 CP Photo: Kaycee Orwig
The former Sears outlet and site of the proposed Amazon warehouse
Traffic is also a major concern for those living farther away from the delivery center. Williams lives up the hill many blocks away from Butler Street, but he uses Stanton Avenue to reach the rest of Lawrenceville, which would also see increases in traffic from Amazon vehicles. He says the street already faces issues with traffic congestion, and additional vehicles have the potential to lengthen commute times even further.

“If there's one crash on Route 28, everybody drives through Lawrenceville. … As soon as that's backed up, all that overflow comes to us, and makes it near impossible for anybody to get through, to be quite honest,” says Boerer.

Residents are also concerned about other established Amazon practices, such as poor treatment of its workers in distribution centers and on delivery routes, where workers have been pressured to pee in bottles and defecate in bags to meet quotas and continue to work despite injury on the job.

“I definitely think there should be good jobs for folks who don't have college degrees. And I suppose Amazon is going to argue that they're going to provide those but … their labor practices are really bad,” Williams says. “Even if they're hiring folks who don't have college degrees, or whatever, I just don't think that's going to be a good job for people.”

Amazon does hosts weekly virtual hiring events in conjunction with local workforce development organization Partner4Work, but it is not yet clear how many hires will
be from within the neighborhood or if it will hire people who commute. If there is no commitment to hiring locally, as well as a lack of incentives to walk, bike, or bus to work, there could be even more traffic in the area from people driving to and from work. Lawrenceville United has already done extensive work in getting zoning laws changed to lower parking requirements for many new homes as a means to discourage as many people using cars in the already crowded neighborhood.

With Lawrenceville’s increasingly gentrified and expensive housing market, however, people seeking jobs at the distribution center may not be able to afford to live in the neighborhood. This would increase the likelihood of commuters coming from outside of Lawrenceville. Currently the median annual salary at Amazon is $29,000, according to NBC News, while the average rent for a 1-bedroom apartment in Upper Lawrenceville is $1,175, up 31% from 2020, according to apartment listing site Zumper.

“I cannot imagine a scenario where it's good for the neighborhood,” says Williams.
Editor's note: This story erroneously stated initially that Amazon declined comment. Amazon did not respond to an initial request for comment, but did not decline. A statement and additional input from Amazon has also been added to the story.