Is the planned hotel behind the Pittsburgh Athletic Association the best we can do? 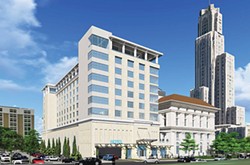 Image courtesy of PFVS Architects
Artist’s rendering of the planned hotel addition to the Pittsburgh Athletic Association, in Oakland (the version recently approved by the city’s Planning Commission). The view is from Bigelow Avenue near Fifth.

There’s little debate about the considerable architectural quality and historic nature of the Pittsburgh Athletic Association on Fifth Avenue in Oakland. The regal building was completed in 1911 to designs by architect Benno Janssen with refined proportions and ornate classical columns in the style of the Venetian Renaissance. It speaks to an era when aristocratic Italian families would spend substantial wealth on their buildings to evoke ancient cultures, embody artistic refinement and celebrate the city’s public life. In early-20th-century Pittsburgh, it reinforced Oakland’s continuing status as Pittsburgh’s monumental cultural district.

The PAA is generally reminiscent of Venice, but the current effort to add a building to it looks exactly like current Pittsburgh in its processes, which have good intentions, but perhaps inadequate outcomes. The need to add to the PAA is understandable. The pleasantly stuffy Edwardian institutional charm persists today, but membership and revenues are similarly declining, as has been widely reported. In fact, similar Oakland clubs such as the University Club and Concordia Club, as well as the Masons, have simply sold their historic buildings to Pitt. It’s actually remarkable that PAA still survives with a plan to keep its doors open in a way that similar institutions have not. PAA’s proposal to add a hotel behind the historic building as it fronts on Fifth Avenue is potentially reasonable, especially given that the Schenley Hotel (long used by Pitt as a student center) helped begin the district’s transformation.

Happily for all concerned, there has been a lengthy and open public process that began last February and has continued through approval by the Planning Commission at the end of July. Councilman Dan Gilman scheduled public meetings and presentations over a period of months and, to its credit, the development team sought input from local groups as well. Criticisms were rampant.

“Everybody told them the building was too big,” says Karamagi Rujumba, of Pittsburgh History & Landmarks Foundation (a group for whom, in full disclosure, I have recently been a guest speaker). The first version of the proposed 10-story structure was 225,000 square feet and 190 rooms, with modernist asymmetry and non-contextual brown accents in its palette. Indeed, there was a general consensus about a number of the building’s shortcomings. Its design was not sufficiently sympathetic to the historic district, it lacked retail activity at the ground level, and the street-level traffic patterns were not well designed, according to Rujumba. The Schenley Farms Civic Association collected similar criticisms about that design. That group’s membership voted unanimously against the proposal, and the Historic Review Commission initially removed it from the agenda.

Development group Callay Capital/Concord Hospitality Enterprises sent designers PFVS Architects back to the proverbial drawing board to make changes, which addressed many of those issues to at least some degree. “The developer and the team did a good effort and a lot of listening,” says Ernie Hogan, chair of the Historic Review Commission, which recently approved the new design. The revised version is 199,000 square feet and 168 rooms, with a greater emphasis than the first version on harmonious materials and architectural treatments. “I think it’s been one of our better processes,” Hogan says. Indeed, in comments that were both delivered publicly and published, Schenley Farms Civic Association president Norman Cleary calls the design changes “an admittedly marked improvement.” But his group was not wholly satisfied, and its final vote was deadlocked. Hogan allows, “In any project, we are not going to get 100 percent.”

The architecture firm that is well qualified to design a nicely functional hotel and to respond courteously through a lengthy public-review process is still not necessarily the best candidate to add to a landmark neoclassical building, or to build with the standards suitable to a historic high-water mark of architectural design.

What are the best examples of this kind of building added to neoclassical monuments, and which firms are best suited to make a nationally admirable project? The HRC should require developers to make these inquiries at the outset. This will lead us to better projects, rather than leaving us wondering why, after a long, open and often conscientious process, the results are still mediocre — an improvement from just plain awful.

The PAA hotel project needs no further approvals from the city and is now good to go. Indeed, says Hogan, “The real story is what happens with the Syria Mosque [site].” A big development on the site of that former historic auditorium, and now long-term parking lot — adjacent to the PAA — is forthcoming, but not officially submitted. The time to ask these questions was not simply in 1911, but right now.