A preview of the inaugural Re:NEW Festival of recycled art

Fest includes more than 80 events and exhibits around town, and an international component 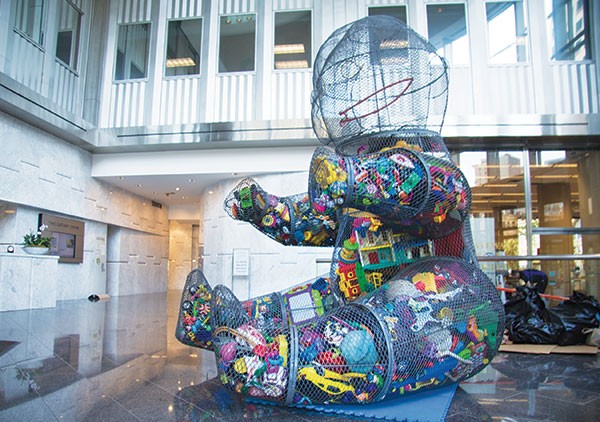 Sept. 9-Oct. 9. Various venues. Most events are free. Full schedule at renewfestival.com
Making art out of old stuff is nothing new. In Pittsburgh, the practice had a heyday in the 1990s, not least due to the Industrial Arts Co-op, which repurposed the copious tailings of vanished local industry and commerce — from scrap steel to old billboards — into public, often guerrilla-style, artworks.

Direct legacies of the IAC include “The Workers,” the large-scale 2012 commissioned sculpture in South Side Riverfront Park, and the giant deer head at Rankin’s historic Carrie Furnaces (completed surreptitiously with materials found on site, now embraced as iconic). Indirect legacies include the work of Bill Miller, an IAC associate who back around 1994 was out scavenging for materials when he ran across some old linoleum. Its pattern impressed him.

“That looks like an impressionist or a Van Gogh sky,” Miller remembers thinking. Eventually, he began using the material for collages, employing differently colored and patterned scraps to create portraits, landscapes, re-imagined historical events and more — including two of Frank Zappa’s posthumous album covers. Working with industrial scissors and utility knives, he’s made more than 1,000 pieces and shown them nationally and internationally.

Re:NEW started with the idea to bring Drap-Art to town: The Pittsburgh Downtown Partnership proposed the idea to the Greater Pittsburgh Arts Council a couple years ago. (Another connection: Russell Howard, the PDP’s vice president for special events and development, is Miller’s partner.) GPAC is an advocacy group, not a presenter, but spokesperson Jen Saffron says the group wanted to assert arts and culture’s place alongside eds, meds and high tech as part of Pittsburgh’s ongoing evolution.

With help from partners including the Pennsylvania Resources Council, Sustainable Pittsburgh, Visit Pittsburgh, the Carnegie Museums and the Pittsburgh Cultural Trust, Re:NEW grew to a month-long festival with more than 80 events all over town.

Highlights include a juried art exhibit for 31 regional artists, to be held at in the large, currently unoccupied storefront at 623 Smithfield St., Downtown. (The jurors are the Carnegie’s Eric Crosby, BOOM Concepts’ Darrell Kinsel and independent curator Kilolo Luckett.) Another 30 artists will present art installations, films, performances and more throughout the month, including California-based Joyce Dallal and New York-based Matthias Neumann. Dallal’s “The Other Toy Story,” installed in the lobby of Two Gateway Center, dramatically highlights the nonrecyclability of toys (which are full of mixed plastics and electronics) with an oversized wire sculpture of a baby that’s packed with them. Neumann is creating a sculptural bench for the North Side’s Neu Kirche Contemporary Art Center as part of the group’s Fallow Grounds initiative for vacant lots.

Also look for speakers; the latest installment of the Art Olympics (with teams of artists competing to make art from donated Goodwill items); and thematically linked exhibits at a host of venues, including Pittsburgh Center for the Arts, Sweetwater Center for the Arts and 709 Penn Gallery.

Still, Drap-Art commands special focus. The 20-year-old festival’s exhibit in the PPG Wintergarden features 60 artists, about half from Spain and the rest from 16 other nations. (Opening weekend includes a VIP reception, live music and workshops.) Reached in Barcelona via Skype, Drap-Art president and founder Tanja Grass said artists who work with trash are usually either younger people who can’t afford new materials or artists who develop an eco-consciousness. In Barcelona, she says, Drap-Art takes place annually in December, as “an alternative to all this crazy consumerism over Christmas.” Drap-Art Pittsburgh highlights recycled materials turned into everything from jewelry and furniture to ironing-board madonnas, and even one of German artist HA Schult’s world-famous, full-sized “trash people.” Grass adds that due to factors ranging from the city’s status as Andy Warhol’s birthplace to the region’s industrial past and ongoing recovery, Pittsburgh is “so so interesting as a place [for Drap-Art] to start in the States.”

Of course, plenty of artists living here do this kind of work as a matter of course. Some who began years ago are still at it for Re:NEW. The Industrial Arts Co-op, for instance, will be at Gateway Center, creating a sculpture of re-used steel and objects reclaimed from Duquesne Light’s field operations.

Then there’s linoleum artist Miller, the only local artist with a piece in the Pittsburgh Drap-Art exhibit, his heavy-industry-inspired “Steal Mill.” Miller likes working with linoleum because it’s relatively inexpensive, and he appreciates the benefits of creative reuse. But ask him why he started using it, and he says, simply, “I loved it, I saw something in it.”

A look at Drap-Art and the Re:NEW Festival’s juried show