A Pittsburgher on her struggles with depression and suicidal thoughts, and how we need to help others | Health Issue | Pittsburgh | Pittsburgh City Paper 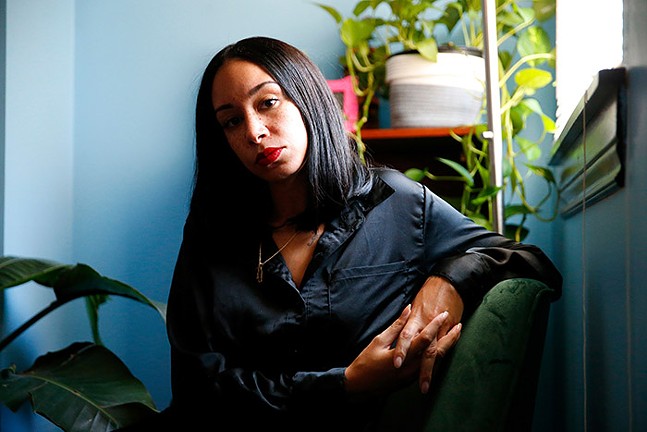 CP Photo: Jared Wickerham
Tara Fay Coleman, at home
I was in a good space last week, focused and motivated, and had been steadily plugging away at various projects. Since then, my mood has completely shifted. As I type this, I haven't yet been able to get out of bed or shower. I ate only because my newest medication, the seventh one I've tried since March, requires it.

I had to rely on my 9-year-old to prepare breakfast for her younger sister, and hope that they are able to occupy themselves because, as shameful as it is to admit, today is one of those days I can't stand to be around them.

I've had mental health struggles since my teens. I consistently engaged in self-harm and dealt with inconsistent moods and depressive episodes, all things I never received adequate support for because my parents characterized it as “white people shit.”

I don't blame them. My mother was a child of the ’60s, when — despite movements towards deinstitutionalization, and a shift in how women's mental health was discussed — there was still a stigma attached that I'm quite sure she just didn't know how to deal with as a parent. In my father's case, mental health was something that was simply never discussed or even acknowledged in the Black community for most of his lifetime, despite the increased rates of anxiety and depression amongst Black adults, and the staggering inequities in diagnoses and access to care.

Living as a Black woman with symptoms of both bipolar and borderline personality cisorder, I am hyper-aware of how those inequities increase, especially with regard to seeking treatment.

For many years, I went without seeing a regular therapist or psychiatrist, even after having dealt with severe postpartum depression. I think I convinced myself that I had things under control, and whatever I was dealing with could be attributed to personal weakness, and I had to fight through it. I wanted to be a mother and a woman who could balance working two jobs and being an artist and maintaining a relationship. But eventually, something had to give.

I’ve always had suicidal tendencies and a preoccupation with death. Someone close to me went so far as to suggest I have a death wish, as I tend to be a bit reckless. But in March of this year, I was quite sure I didn't want to live anymore, after having been stuck in one of the worst and longest depressive episodes I had ever dealt with. I felt incredibly lonely and isolated, and I didn't know where to go for help. There's a quote from the author Jeffery Eugenides I always think about that refers to “the outrageousness of a human being thinking only of herself.”

Suicide is by no means a selfish act, but in moments of consideration, I can only focus on how much of a burden to others my existence is, and what a relief it would be to simply not be here anymore, not have to think or feel or be in so much pain. None of these things are true. Outside of these moments, I am very aware of the fact that I'm not a burden, and that ending my life is a permanent solution to a temporary problem. Not only that, but I would be deeply missed.

A close friend referred me to Western Psych, and I hesitated for more than a week because frankly, I was terrified of how a Black woman in a mental health crisis might be treated. I put things off until one night, I couldn't take feeling like this anymore. The only thing that stopped me from doing something I might regret was the idea of my children finding me like that, and the way it would traumatize them. So instead, I called someone to come over, and I went ahead and admitted myself.

From there, I started an intensive outpatient program and was immediately connected with a therapist and a psychiatrist, and I began group therapy sessions four hours a day, three days a week. Things have been better since then, but there are definitely still ups and downs.

I also know that there are millions of people who face the same struggles I do, and despite the fact that I am predisposed to deal with many of the issues I've had based on my race and gender, my experience is unique in that I am very fortunate to have a support system and friends who knew of options for treatment.

In addition to that, I'm insured, and I have a job that was incredibly understanding of my struggles, which gave me all the time that I needed for my recovery. Many others are not in the same place, and as hopeless as I have felt at times, I imagine it's so much worse for others.

I'm here now because when I'm clear-minded enough, I can believe that my existence serves a purpose. My hope is for anyone who thinks they are a burden, or feels as though they are unsupported, to have moments where they are able to realize how much they are loved and valued.

My hope is to see a continued destigmatization of discussions about mental health, with more resources for Black mamas, Black youth, and the Black queer and trans community, as they are the most at risk.

My hope is to see an increase of support for the organizations in the city who are providing mental health services for our marginalized communities. My hope is for my experiences to help someone make the right decision, or push them to ask for help, and in turn have that help be readily accessible.

My hope is that we have more grace and understanding for others, and especially for ourselves, because none of us are alone in our struggles, no matter how deeply we feel otherwise. 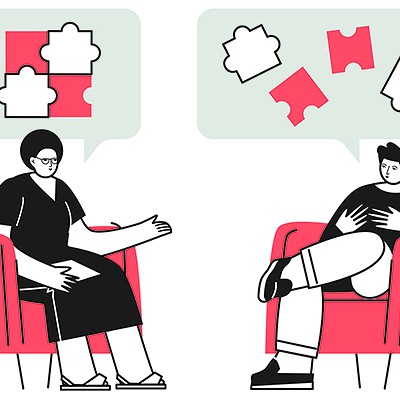