"I wanted the book to have a sense in which adulthood is a sort of conspiracy against youth." 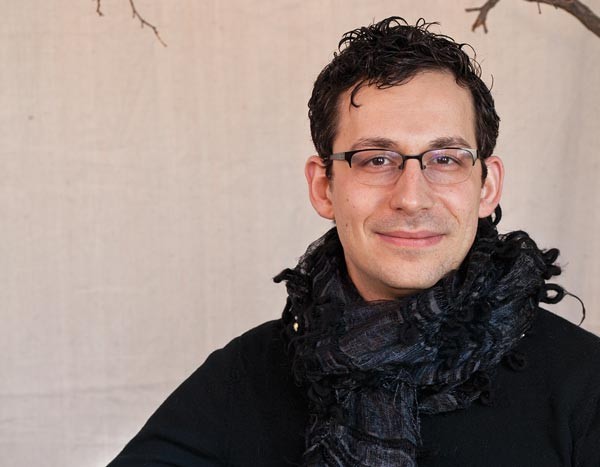 Jacob Bacharach is publishing his first novel. The Bend of the World, he quips, is "a coming-of-age story in which no one comes of age."

Set in Pittsburgh, the book is a rollicking, occasionally mad blend of dark workplace comedy and crooked love triangle(s), improbably suspended in a web of conspiracies and conspiracy theories involving, variously, UFO sightings over Mount Washington, time travel, a corporate takeover, Bigfoot, secret chambers beneath the Point, Nazi ancestors and plenty of drugs. The narrator is Peter Morrison, age 29, with a fateful 30th birthday party looming.

Bend of the World, out April 14 on W.W. Norton imprint Liveright Publishing, is already getting national press. And the real-life story of a young Pittsburgh arts administrator with no publishing credentials getting a hardcover deal might inspire some conspiracy theories itself — save for the strange power of the Internet.

Though his father's family has roots in Point Breeze, Bacharach grew up mostly in Uniontown, then studied English and creative writing at Oberlin University. "I spent my last couple of years there when I should have been thinking about going to graduate school mostly hanging out in a big house on North Main Street, ... smoking weed and watching cooking shows," says Bacharach, who at 32 is tall, thin and boyish. Shortly after returning to Pittsburgh, in 2003, he was hired by the Pittsburgh Cultural Trust, which in 2008 gave him his current position as operations manager at the Benedum Center. (An oenophile, he's also a popular host for the Trust's Wednesday Wine Flights.)

He'd always wanted to publish his first book by 30, but for years his only writing for public consumption was as the pseudonymous blogger IOZ. The persona, named for a 1990s Saturday-morning cartoon, was "this character who was this wild, radical, drug-addled anarcho-capitalist humbugger who mostly wrote about politics," says Bacharach.

IOZ had a cult following. "He is knowledgeable on any subject, he darts from religion to politics to sex to the arts," wrote an online admirer in 2007. "He's outrageous. He's unique, he's dazzling ..." Before Bacharach retired the persona, he'd acquired fans and correspondents including one Will Menaker. "He occupied a corner of the political blogosphere that positioned himself against everyone," recalls Menaker today. "His commentary and his point of view was just so razor-sharp that it was hard to argue with him."

After Menaker was hired at Liveright, he asked Bacharach about a book his blog had hinted he was writing. That book wasn't actually finished, but with Menaker's prodding, by late 2012 Bacharach completed the first draft of Bend. Menaker said this out-there novel by an unpublished author wasn't as hard to place as he'd feared: "The originality of his voice and the quality of his writing stood out from the first page."

Bacharach, who lives in Lawrenceville, comes by his attraction to conspiracies honestly, from a childhood obsession with secret histories to an abiding love of Philip K. Dick. Bend also includes some amusingly acerbic commentary about the local contemporary art scene (where Bacharach has plenty of friends); witty badinage, perhaps especially from Peter's WASP parents and aged grandmother; and a notably disconsolate undercurrent about addiction, especially in the cases of Johnny and Mark's artist girlfriend, Helen.

The book jacket's blurbs are impressive: Critic James Woolcott (an IOZ fan) chipped in, as did names like Gary Shteyngart and Bacharach's old Oberlin instructor Dan Chaon. Advance reviews range from positive (Booklist: "inarguably amusing") to dismissive: "As with many postmodern novels for lads, the author simply can't decide what story he wants to tell," wrote Kirkus Reviews.

Inevitably, given the book's setting and coming-of-age arc, there'll be comparisons to The Mysteries of Pittsburgh, with its own love triangle, outlaw buddy and menacing demimonde; even Liveright's publicity references Michael Chabon's iconic 1988 debut novel. But Bacharach eschews the comparison, and not just because Chabon's subsequent career sets such an intimidating standard. He says Bend is more like Joshua Ferris' 2007 ad-industry satire Then We Came to the End, or even Chabon's Wonder Boys.

While Bacharach sometimes conjures conspiracies in Bend partly to mock them, not all are limned entirely in jest. For one thing, he says provocatively, "[A]ll stories are conspiracies": Life is plotless, and "narrative is the application of conspiracy theory to life as it is lived." For another, Vandevoort's sinister leveraged buyout and plunder of Global Solutions is Bacharach's satiric "critique of late capitalism," a system whose only real product is profit.

Even the so-called coming-of-age is ambivalently rendered. "I wanted the book to have a sense in which adulthood is a sort of conspiracy against youth," says Bacharach. "I think of the book as being about the false allure of [a certain kind] of adulthood — having the important job in the corporation, being able to fire people, making a bunch of money, driving the nicer car — all of these things as being enticements from the darker world of adulthood as our society conceives of adulthood, against the admittedly problematic and drug-addled youth that [Peter] was escaping from."

Meanwhile, don't take Peter for Jacob. Unlike his protagonist, Bacharach is gay, and that's just one of their differences in this quite unautobiographical first novel. "I didn't want to write myself too much in the story in part because I'm kind of boring," says Bacharach. "I like to cook and play with my dog and ride bikes and do stupid home-improvement projects. ... My friends and acquaintances are much more interesting than I am. I figured I would just steal their lives and write about them instead."

So I was the manger of customer analysis and spend processes, which meant about as much to me as it does to you, at a company called Global Solutions, whose remarkable slogan was, Solutions for a Global World. Actually, I was one of many managers of customer analytics and spend processes, and while this bothered some of my more, uh, career-oriented colleagues, I figured it was for the best, since it meant that I didn't have to manage anything. Look, people will tell you that corporate America is an insatiable elder god, an implacable, amoral Mammon into whose gaping, bestial jaws flows the life and blood and spirit and dreams and democratic aspirations and so on and so forth of everyone and everything on this not-so-good and no-longer-green earth, but let me tell you, if what you really want is to read blogs all day and occasionally take the back stairs down to the largely vacant twenty-third floor to take long, private shits in the single, lockable handicapped restroom and to get paid, like, sixty-five grand for the trouble, then good God, there is not more perfect job.

No, I am serious: the office only crushes your soul if you're dumb enough to bring it to work.