CP photo: Hannah Lynn
Spork on Penn Avenue in Pittsburgh
UPDATE: Thu., July 2, 12:00 p.m.
Yesterday, a restaurant in Pittsburgh’s East End that has recently been struggling to figure out how to operate while some of its employees have tested positive for COVID-19, has decided to close indefinitely.

Spork is a popular restaurant located on Penn Avenue on the border of Friendship and Garfield. On June 26, an employee at Spork Pit, its sister restaurant located across the street, tested positive for coronavirus. Since we first published our story, the employee’s girlfriend, who works at Spork, also tested positive. All other employees were tested and were found negative for COVID-19. But with the Spork Pit employee feeling sick on June 17, some staff interaction with his girlfriend, and both restaurants being open from June 23-26, the restaurants decided to close on June 26 as a precaution.

Now with rapidly rising COVID-19 cases in Allegheny County, fears about more employees and customers potentially getting infected, and the county’s decision to ban onsite alcohol consumption, Spork has decided to close indefinitely, but did also write, “We will be back!”

Wednesday, July 1st 2020 . SPORK IS CLOSED INDEFINITELY . 😢 With the new no-alcohol consumption on-premise order, rising COVID cases in restaurants and bars, and the limited capacity seating, we have decided there are far too many variables affecting our business to continue to operate in this current climate. The safety of our staff and guests is of the utmost importance and while we can attempt to make a space that is conducive to reducing spread, it has become painfully obvious that the risk involved in indoor dining cannot sufficiently keep the people we care about 100% safe. We will take the summer to adjust how we can operate in a safer environment with the hopes that Allegheny County will once again flatten the curve and make Pittsburgh's distinguished dining scene once again possible. Thank you for your support. Be well, stay safe, and care for your fellow Pittsburghers during this trying time. . We will be back! . - The Spork Family

“With the new no-alcohol consumption on-premise order, rising COVID cases in restaurants and bars, and the limited capacity seating, we have decided there are far too many variables affecting our business to continue to operate in this current climate,” reads a social media post from Spork.

Spork Pit, the sister restaurant, is also still closed, but it is unclear if it will reopen for take out. The restaurant had been open for takeout since June 1, before closing on June 26.
Original story published June 28:
On June 26, at around noon, a restaurant worker got word that he had tested positive for COVID-19. The person worked as a manager at Spork Pit in Garfield and his last day of work was June 17, when he was feeling sick. Spork Pit and its sister restaurant Spork just across the street reopened for the first time during the pandemic on Tue., June 23. Both restaurants were also opened on Wednesday and Thursday. (Spork Pit has been opened for takeout since June 1.)

Then, on Fri., June 26, shortly after getting word about the employee testing positive for coronavirus, Spork Pit announced on social media it was closing as a precaution. A few hours later, Spork announced it was closing too.

Some of the “minimal interaction” is being questioned by some Spork employees who spoke to Pittsburgh City Paper, who are concerned that the contact could possibly put them and customers at risk of infection. But Spork's owner says he spoke with an epidemiologist about developing a protocol to follow when a worker is infected, and ensures people that the restaurant is following that to a tee, and is even going beyond those measures. Either way, the struggle of Spork and Spork Pit to re-open during the pandemic showcases the risk of operating dine-in restaurants with COVID-19 still spreading across the country.


Spork owner Andy Tepper says that this Spork Pit employee started to show symptoms and feel unwell on June 17. He then went home and stayed there until he was eventually advised to get tested by his doctor on June 23. Three days later, his test came back positive.
click to enlarge 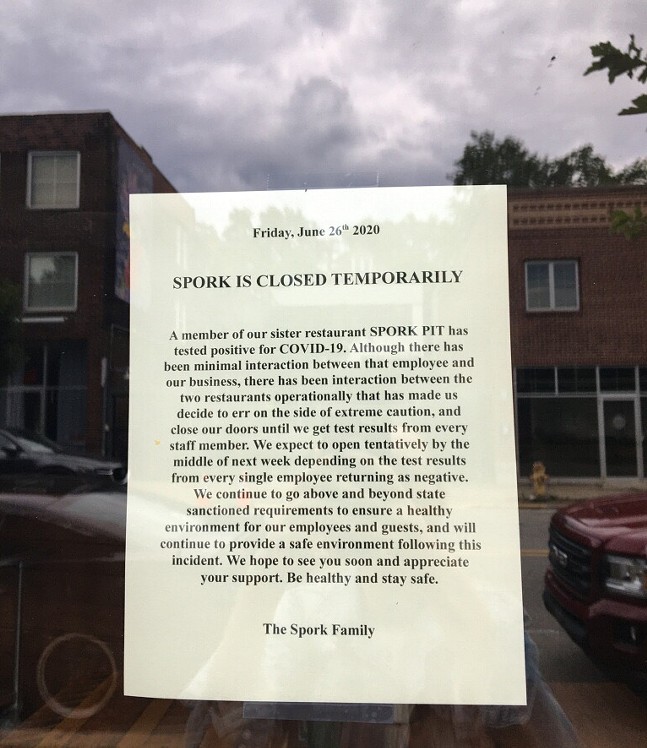 CP photo: Hannah Lynn
Closure notice at Spork placed after Spork Pit employee tested positive for coronavirus
Spork Pit and Spork opened on June 23, which was more than three weeks after they could have opened up when Allegheny County moved into green phase on June 5. Another Spork employee who spoke to CP on the condition of anonymity said they were concerned the staff might be spreading COVID-19. They say another Spork employee is dating the Spork Pit employee who tested positive for coronavirus, and the two live together. The Spork employee who lives with the employee with COVID-19 taught a cocktail class on June 22 with all nine front-of-house staffers, and no one was wearing masks, according to the employee who spoke to CP. The staff then served customers for three days of service. The employee says front-of-house workers were wearing masks during service, but not for setup. The girlfriend of the infected employee last worked on June 22.

“I think we have a moral obligation to let our guests know if there is a possible exposure,” said the employee who spoke to CP.

Scientists don’t yet know how easily asymptomatic carriers of COVID-19 can transmit the disease. Pre-symptomatic carriers release particles containing the virus fairly easily from their nose and mouth, a reason why mask use is so universally recommended.

Tepper says Spork’s policy is to pay for workers to stay home if they feel sick and asks those sick workers to get a coronavirus test. Then, anyone who has had even casual contact with the employee who is presumed positive should also be tested. If and when an employee is a known positive, then all team members who have had casual contact with that employee will be given a series of four tests over the course of several days. Tepper says this is to catch any pre-symptomatic or asymptomatic cases among staff.

This is much different than other area restaurants, some of which have actually encouraged their employees not to wear masks.

Tepper has made Spork’s COVID response plan public. And it includes this procedure and another procedure for when Spork is informed if a diner has tested positive for COVID-19. There is also strict cleaning and disinfecting guidelines listed by the restaurant. But one part of Spork’s plan may be out of date. It says, “Asymptomatic transmission of Covid is uncommon, but may occur.” Just yesterday, the World Health Organization had to amend a statement that said asymptomatic transfer was “very rare,” and instead clarified that they don’t know exactly how common asymptomatic transfers are.

Not that this is a huge fault of a small restaurant in a mid-size city. Information about coronavirus transmission has been constantly changing, and health officials have been backtracking and altering positions constantly. The federal government said mask wearing may not be ideal right before the U.S. pandemic started, and has since reversed course on that, and is imploring everyone to wear masks, particularly when inside businesses.

Tepper also acknowledges the challenges of trying to run restaurants during the pandemic and bring in revenue after being shut down for so long. “What are these things that we can do to catch the most COVID cases, without shutting down entirely?” asks Tepper, referencing the balance of trying to maintain the restaurants while also not contributing to coronavirus spread. “Maybe we should have closed down Spork, since people could have been pre-symptomatic and asymptotic, but that would have been two asymptomatic [transfers] to people.”

Many small businesses didn’t receive PPP loans from the government. And studies show that any stimulus payments that went directly to U.S. residents were mostly spent at large businesses like Amazon, and not at small, local businesses.

A Spork employee thinks the whole situation at the restaurants is an example of why indoor dining and drinking shouldn’t be open at all. “I think it was too soon to open up to indoor dining and indoor bars,” says the employee. "I think it is irresponsible.”

Today, Allegheny County saw 96 new coronavirus cases, the single highest one-day total the county has seen since the pandemic began. This follows a week of a large number of daily cases. Allegheny County moved into green phase on June 5, which meant that restaurants could reopen their dining sections, at 50% capacity. County officials have contact traced many of the cases over the last week and have said they stem from people traveling out of the region, and from people visiting restaurants and bars. Several other restaurants in the region have also found employees that have tested positive for COVID-19 and have closed as a result.

Allegheny County spokesperson Amie Downs said that the county is able to provide contact tracing for people who have been infected by COVID-19, and people who have been in contact with a known positive case for 10 minutes or longer. This means that the county will perform contact tracing on the girlfriend of the Spork employee, but not the rest of the staff who came into contact with the girlfriend.

Tepper says he is trying to decide whether or not to eventually reopen, after staff is tested. He is concerned about this week’s rising coronavirus cases and is leaning towards not reopening the dining sections of both Spork and Spork Pit in the near future. Today, Allegheny County officials announced that bars will close and restaurants will be barred from serving alcohol effective immediately in response a recent spike in COVID-19 cases. That means Spork and Spork Pit can reopen when they please, they just can't serve booze and let diners consume on-site.

For one Spork employee who spoke to CP on the condition of anonymity, the whole situation of the restaurant reopening after an employee got sick, but before his test results came back, was too much to take. The employee told CP that they recently quit and that decisions around reopening was part of the reason why.

“There are a lot of good things that they have done,” said the employee, referencing Spork ownership. “They helped employees financially during the closures. But coming back, there appears to be a shift in accountability and that is hard to stomach.”