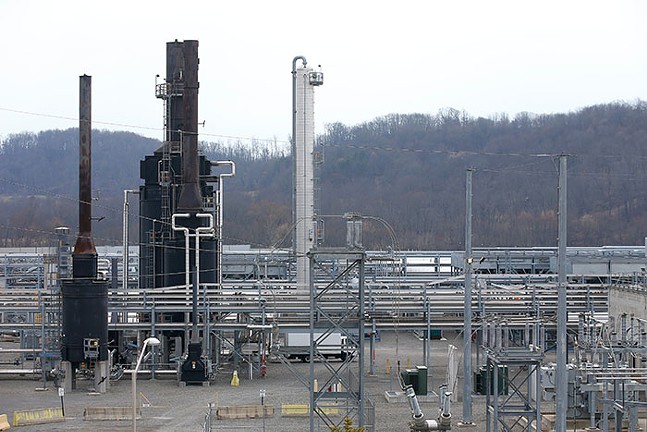 CP Photo: Jared Wickerham
The MarkWest Energy Bluestone Processing Plant in Evans City, Butler County, which processes natural gas.
Multiple studies across several different regions have shown links to increased health risks for those living near natural gas infrastructure, aka fracking. Living near fracking wells in Pennsylvania increases the rates of severe and moderate asthma attacks, according to a 2016 study from JAMA Internal Medicine. A 2014 study out of Colorado suggested that living near fracking sites may increase the risk of some birth defects up to 30%. A similar study from 2017 in Pennsylvania showed that infants born to mothers who live very close to fracking sites have a higher risk of low birth weight.

But, until now, there hasn’t been a study in Pennsylvania that provided more exact answers as to why living near fracking wells is associated with these adverse health effects. There hasn’t been research showing if any increased rates of toxins or chemicals — the kinds that cause negative health effects — are making their way into the bodies of residents who live close to natural-gas infrastructure.

For the last two years, Pittsburgh-based reporter Kristina Marusic has worked to find some of those answers. Marusic is a reporter for the nonprofit online publication Environmental Health News, and has spent months not only reporting and writing about the toll the fracking industry has taken on some families, but has conducted scientific research to test families who live near natural gas infrastructure for certain biomarkers.

“I have been reporting on fracking for a couple of years, and I noticed there were a lot of studies on health issues, but there looked to be very few studies looking at these studies of how chemicals get into people’s bodies,” says Marusic.

She and her team at EHN collected urine samples from five families in Southwestern Pennsylvania, along with air and water samples, and had them analyzed for chemicals associated with fracking. What EHN found were chemicals in each of the samples linked to harmful health impacts, cancer-causing chemicals in air samples at levels exceeding recommended thresholds, and biomarkers for certain chemicals that are significantly higher than the American average. (Biomarkers are produced when certain chemicals are broken down by the human body’s natural processes.)

The investigation is another data point in the piling mount of health studies against the natural gas industry. It comes as skepticism is growing against fracking in Pennsylvania, the industry is seeing an economic decline, and a ban on fracking in some counties in Eastern Pennsylvania has been recently enacted. But natural gas still has plenty of support within the commonwealth too, and boosters continue to sing its praises and counter studies on health effects. The EHN effort offers another fork in the road for a state unsure where fracking will lead it. 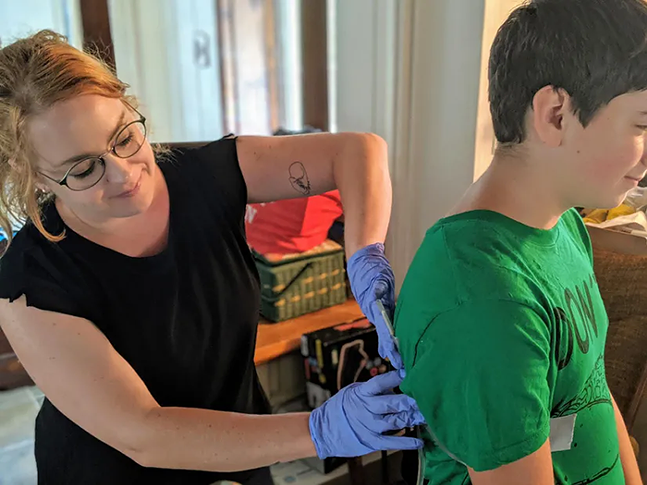 Photo: Courtesy of Mason Secreti
EHN reporter Kristina Marusic sets up an air monitor for Damien Schaffer.
Marusic says the investigation was inspired by her colleague Douglas Fischer, who conducted similar research about flame retardant chemicals and wrote a report out of the California Bay Area. She believed Pennsylvania needed something similar, given the prevalence of the fracking industry in the state over the last decade. Marusic found studies out of Canada and other parts of the U.S., but nothing studying families in Pennsylvania, which is the country’s second largest natural gas producing state.

She also recognized the litany of studies linking health effects, like increased asthma rates and lower birth weights, to fracking but notes there was always a level of uncertainty about what could be causing those.

“It just comes up again and again, these studies showing those who live closer to fracking wells, that they have more miscarriages or other health effects,” says Marusic. “But there was a big missing piece and big unanswered questions.”

Marusic also notes EHN’s data has value because studies tracking emissions directly from natural gas infrastructure can be sporadic at times and “hard to catch.” She says studying what is found directly in people’s bodies, and the air and water they directly intake, helps to prove exactly what emissions are making their way into Southwestern Pennsylvanians.

So, following Fisher’s lead, Marusic found five families in Southwestern Pennsylvania who live near fracking infrastructure like wells or injection sites. Three of them live in Washington County, which has the highest concentrations of fracking in the region. Those Washington County families all live within five miles of multiple fracking well pads. The other two live in Westmoreland County, more than five miles from well pads or fracking injections sites, but still within seven miles. There were a total of 20 different subjects across the five families.

According to EHN’s website, 59 urine samples, 39 air samples, and 13 water samples were taken from the subjects over a nine-week period. Then, scientists at the University of Missouri analyzed the samples to look for 40 of the chemicals most commonly found in emissions from fracking sites.

After these samples were analyzed, they revealed significantly high levels of biomarkers associated with chemicals like ethylbenzene, styrene, and toluene, which have been linked to cancer, as well as shown to damage the central nervous system. 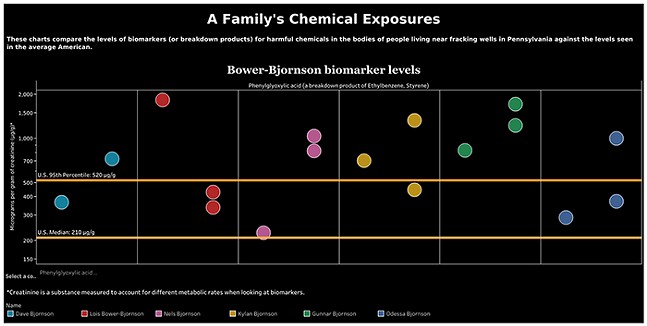 Source: “Environmental Health News”
Biomarker levels of phenylglyoxylic acid from the Bower-Bjornson family, which are all above U.S. average, and some by significant margins.
The research and series is also unique because it studies more children than adults, which can be revealing because children haven't engaged in any of the lifestyle behaviors that often lead to adults having high levels of unwanted chemicals in their bodies like smoking, drinking, varnishing floors, and driving heavy machinery, according to EHN’s website.

Marusic says this led to some significant findings, including a biomarker for toluene found in a 9 year-old boy at a level 91 times as high as the average American. The biomarker for toluene, hippuric acid, is formed when the body processes tea, wine, and certain fruit juices, so Marusic expected the subjects to show biomarker levels of the chemical. But she says that level found can be concerning because toluene can damage the nervous system or the kidneys.

“Some of the most shocking outliers we saw were in kids,” says Marusic.

She recognizes that five families doesn’t completely fill the research gap in fracking studies in Pennsylvania, and she is hopeful that a bigger scale effort will follow. And there are still questions to answer about what biomarkers everyone in Western Pennsylvania is experiencing, not just those who live close to fracking sites.

“To tell what the average Western Pennsylvanian has, we need more testing,” says Marusic.

Some local officials say the jury is still out on the health impacts of fracking. Diana Irey Vaughan, a Republican Washington County commissioner, spoke to EHN and acknowledged community concerns about the alleged childhood cancer clusters in northern Washington County but said, "We have not seen scientific proof that there is a correlation between the two.” Vaughan also said other industrial sites in the region could be contributing to potential environmental exposures. Southwestern Pennsylvania is home to many facilities that emit toxins and other irritants into the air and water, including coal dump sites and coke works for processing steel.

Fracking boosters also claim the natural gas industry has helped to clean up the environment, noting a reduction in carbon dioxide emissions. Environmentalists counter that by saying fracking is just putting coal, with its high carbon emissions, out of business, and that natural gas still emits copious amounts of methane, which is a more potent greenhouse gas than carbon dioxide.

CP Photo: Jared Wickerham
The MarkWest Energy Bluestone Processing Plant in Evans City, Butler County, which processes natural gas.
Either way, the future of the fracking industry is on less stable ground in Pennsylvania than it was 10 years ago. Fracking was recently banned in the Delaware River Basin, which includes two counties with significant natural gas activity in Northern Pennsylvania. The continued cheap prices for natural gas has led to many large players in the industry to pull out of the region, and is forcing those who stay to consider alternative uses for gas, such as fueling petrochemical facilities like the cracker plant in Beaver County, which refines natural gas into plastic pellets.

Polls have shown Pennsylvanians are conflicted about their support for fracking, with a slight majority opposed to the practice. And politicians like former President Donald Trump continue to make fracking a wedge issue, even as it slowly declines.

In the middle of all of this, however, are the families who live close to pipelines, injection sites, and wells, says Marusic. She says she wanted her series to remind people of the humanity of stories about the natural gas industry.

“The people in the study, many other people just told them, ‘Why don’t you just move?’” says Marusic. “But their roots were there, their families were there, and anywhere they went, they might just encounter the same problems. It is inescapable.”

Marusic says a quote from Lois Bower-Bjornson, one of the study subjects, really struck her. Bower-Bjornson talked about how Pennsylvania, over its history, has continued to be lured by the job promises of extractive industries — like coal, oil, and lumber — only to be left with negative health impacts, and to clean up an industry that will eventually leave Pennsylvania. Marusic says that Bower-Bjornson was perplexed at how many times the state has to do this over and over again.

"It's almost a bizarre genetic trait among people in this region that this is just always what we do," said Bower-Bjornson in the EHN investigative series.
Read the full report on Environmental Health News’ website at ehn.org.