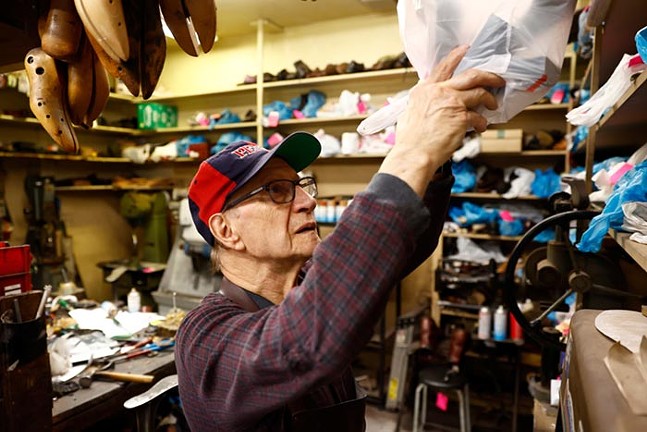 Gabriel Fontana has been hammering, stitching, and buffing shoes for nearly 75 years.

He was 35 and a recent Italian emigrant when he took over his brother-in-law’s Forbes Avenue shoe repair store in the 1970s. Back then, times were good for the trade he’d honed since boyhood.

“It was a very busy time, and I was packed,” Fontana recalls. “At lunch time, people walked on the streets.”

Fontana was not the only cobbler flourishing under the pre-internet retail environment in which he got his start in Pittsburgh. He remembers at least nine others plying their trade Downtown in those early days.

But over the years he’s seen all but one of them quietly shutter, and now, having outlasted almost every business on his block, he’s preparing to hang up his tools in December.

Although business has dropped off since the pandemic, Fontana says he’s not being pushed out by market forces and insists there’s still healthy demand for shoe repair services.

Customers say they will miss the man and his services in equal measure. Since he announced his closure, some longtime clients have dropped off bouquets of flowers along with their shoes. Others have stepped inside the store streaming with tears, according to Charles Keith, a shoe shiner who works out of Fontana’s storefront.

“They like him being down here,” says Keith, who began working for Fontana when he was 15 and returned six years ago after an interval of several decades. “He’s become an institution. Everybody else left from down here. He was just about the only one left. And I think people kind of took that for granted for many years.”

Fontana says he will in turn miss his many loyal customers.

“I feel bad because everybody says, ‘There’s nobody left here - where do we go?’ Everybody talks about how they’ll miss me.”

Still, he’s ready for a slower pace and more time tending to his vegetable garden, where each summer he grows a variety of tomatoes, onions, peppers, and beans.

Fontana grew up in the rolling hills of Calabria, a southern Italian province known for its olive oil, wine, and citrus fruits. He got his first taste of the shoemaker’s trade at age 6.

“I was going in the morning to school, and in the afternoon I was learning trades,” Fontana recalls. “Then, when we learned, we had a few choices like, shoemaker, tailor, carpenter.”

But the agrarian economy of southern Italy was left in ruins after World War II, so Fontana got out when he could.

He spent 10 years working in a German shoe factory before following his uncle and sister to Pittsburgh when he was 28. His brother-in-law, also in the shoe trade, set him up in Gibsonia, where he worked for several years before taking over the family’s Downtown store.

Fontana used to take on apprentices, but says there’s no longer any interest among younger generations for learning a traditional craft, and as such, no natural successor to hand the reins.

“Who knows why?” he says. “It’s a skill and you can make a decent living.”

According to the Bureau of Labor statistics there are less than 5,000 cobblers now employed across the country — about 100 in every state.

Others in the leather and textile trades are feeling the same pinch. 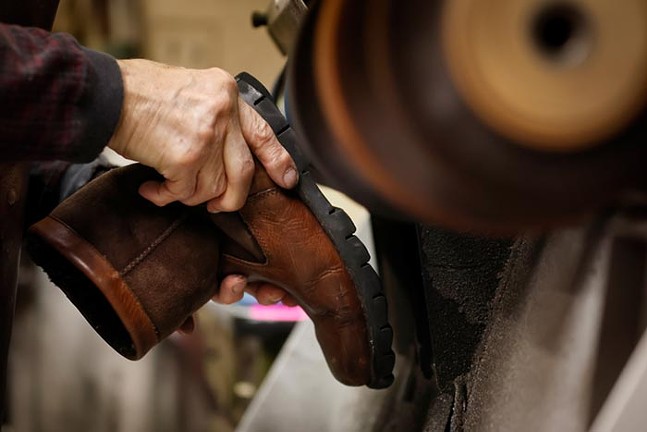 “Gabe’s a professional in his approach to what he does,” says Joseph Orlando, owner of an independent menswear store that employs a tailor. “These guys are artists and people don’t do what they do anymore. And so, when our tailor retires, which some of them already have, we're struggling to find out who's going to do that work.”

Inside Gabriel’s Shoe Repair, tools like a 1940s treadle sewing machine have been stitching leather for as long as Fontana. He says the craft has changed little during his career, but the world around him has altered profoundly.

The ascent of strip malls and foreign manufacturing, coupled with a cultural shift in favor of disposable clothing, has drained demand for shoe repairs. But despite all this, Fontana says business from Downtown officeworkers remained steady until 2020.

“Most of the people here Downtown wear decent shoes,” he says. “A lot of people work in the office Downtown and they buy good shoes and it was busy all the time. And after the pandemic a lot of people were home, so it was very, very, very quiet.”

Keith, who also relies on Downtown workers to make his living, says business has been steadily returning, “but even more so now that [the store is] closing and everybody's trying to get their stuff in here.”

New data released by the Pittsburgh Downtown Partnership indicates after plummeting below 10,000 in April 2020, the daily workforce in Pittsburgh’s central business district had risen back to about 35,000 by October 2022, about half the number from January 2020.

Overall daily foot traffic — including residents and visitors — has also rebounded from less than 40,000 to slightly above 80,000. But that’s still well below 2019 levels, when some months saw daily visitors top 140,000.

Orlando says times have been hard for independent retailers across the board since the pandemic.

“We need people running around town supporting businesses,” he says. “Whether it's a shoe maker, a barber like the guy next door or a restaurant, that's kind of disappeared. Hopefully, it'll come back.”

Fontana’s landlord, Gerald Schiller, is on the hunt for a new tenant and hopes to find someone who can maintain a retail presence there.

“He’s an institution,” Schiller says of Fontana. “He’s been here since 1974, since my father owned the place. He’s kind of become an attraction in himself.”

Whoever next occupies the space, Fontana says, it won’t be another cobbler. He’s done his best to seek out an interested successor, but to no avail.

Keith, who has learned the basics of shoe repairing under Fontana’s tutelage, said he momentarily considered taking over the store but decided against it. Anxious customers have assured him he’ll keep their business if he maintains a presence downtown as a shoe shiner.

“There’s money to be made doing it, but then I have to set up somewhere else and it’s almost like starting over,” Keith says.

Orlando has known Fontana since 1981, when his father, also an Italian emigrant, opened the family business after working through the ranks in retail sales. 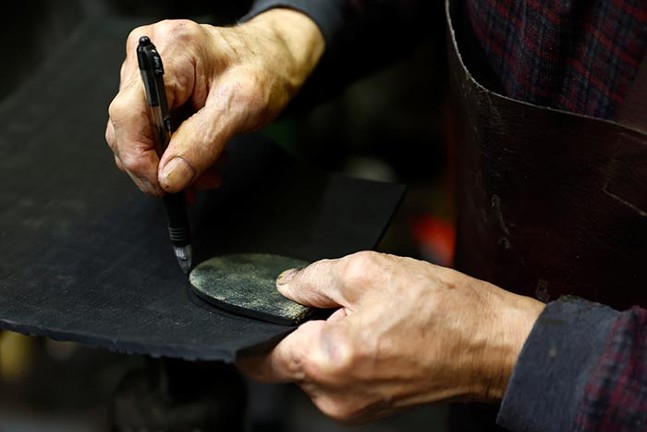 Through their complementary trades, they formed a close association that’s endured through the decades. Now, with no one else to which he can confidently refer them, Orlando says his own customers will suffer from Fontana’s closure.

“Any time we ever had an issue with shoes, either for a customer or for ourselves, there's no doubt we would go to Gabe and every time he would take care of us,” Orlando says. “Recently, we had a guy who bought an expensive belt off of us and it was too big and we couldn't get another size. So Gabe cut it down, and I was just thinking, once Gabe is gone, I'm gonna lose that sale because we're not going to have anybody to fix it.”