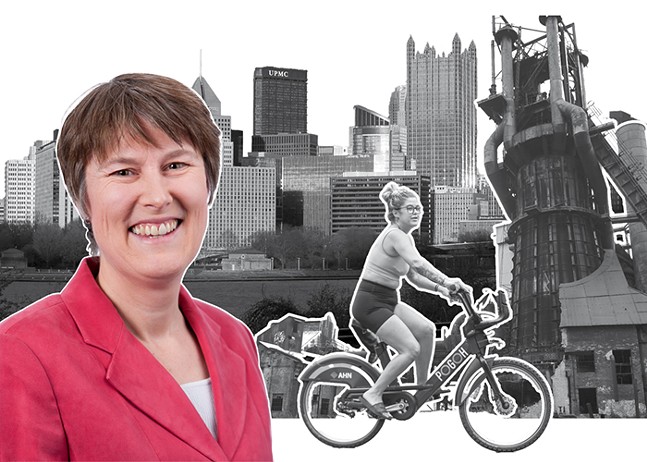 The spark that created a climate scientist began when Dr. Brenda Ekwurzel asked Santa Claus, “Where’s all the ice?!”

Mr. Claus may not have been within earshot of Ekwurzel, although she and a team of scientists were in the Arctic Ocean approaching the North Pole on an icebreaker that was, alarmingly, not breaking any ice at all.

Ekwurzel, a senior climate scientist and director of climate science for the Climate & Energy Program at the Union of Concerned Scientists, explains over a video call that her love of earth sciences began as a child in Pittsburgh – seeing the rivers, scrambling over abandoned coal mines, picking up fossils, and even watching the coal barges sailing over the Monongahela.

Ekwurzel had to experience the climate crisis up close and personal — for her, being in Mr. Claus’ Neighborhood — before being ready to take action.

For me, it was going to graduate school in Kenya and seeing the lack of access to food, water, and shelter as a direct result of the climate crisis. Ekwurzel went from being interested in learning about groundwater health to our global health.

Although, she asks that people not say “Save the Planet.”

“I hate that saying,” says Ekwurzel. “The planet is going to be fine, it’s about saving ourselves and the other animals, plants, all of our family members.”

Fast forward to September 2022, and Ekwurzel is in Greenland with leaders in the private and public sectors, and policymakers, observing glaciers. “We went to a glacier that was the most active, it’s calving most of the time,” says Ekwurzel. “We were there for nearly 24 hours.”

She adds, “We kept hearing the groaning and moaning of this glacier ... I was brought to tears.”

At this point in the conversation, I have to be honest and say I am feeling dispirited. So I ask Ekurzel, what can we do?

“We can acknowledge the pain,” Ekwurzel says. She, at times, feels like, “We have not done enough.”

But this is how her hope is renewed. “I feel the log jam breaking, the log jam of resistance to doing nothing, which is choosing really serious suffering.” The leaders who saw and heard the moaning death cries of that glacier in Greenland just a few weeks ago are committed to making the climate crisis a top priority.

But what of Pittsburgh? Santa does not live here, nor is this Puerto Rico or Greenland. What is Pittsburgh’s climate crisis legacy and future?

Ekwurzel acknowledges our Industrial Age history: “We kept the lights on, we’re proud of it … If it was a cloudy day, it was because people were working: burning coal, making steel … building bridges around the world.”

But Pittsburgh can, and, in some ways, is creating a new climate legacy by ensuring new buildings are more energy efficient. “You do not have to go too far outside of Pittsburgh to see people can make choices,” Ekwurzel continues.

Those choices are renewable energy and the jobs connected to sustainability. And there are technologies and solutions, “We have not even thought of yet,” Ekwurzel says with palpable joy. The joy in reducing suffering. She offered Texas as an example, a state known as both a big oil and wind energy producer. Pennsylvania can do the same right now — according to PennFuture’s 2021 report, we spend about $300 each on fossil fuel subsidies. Imagine if that nearly $4 billion was invested in sustainable energy.

As we see an increase in climate disruptions, some in Pittsburgh have begun to speak of a “safe zone” for climate change. To this Ekwurzel says simply, “No.” As she pulls up a presentation from the Union of Concerned Scientists called “Too Hot To Work.”

The Heat Index is humidity plus the nominal temperature “What it feels like outside” in a weather report. Right now we have warmed up to about 11 days a year with a Heat Index of 90 degrees or more. Important point, most of the global warming began in the 1950s with a majority of it happening in the past 30 years.

If we don’t do enough to mitigate the climate crisis, we are projected to reach 88 days above 90, basically, all summer. Now before you get excited about Pittsburgh being meteorologically transported into Arkansas, think about how that heat will impact an already aging infrastructure, housing, agriculture, outdoor workers, out-dated power grid, and an aging population.

Before despair sets back in, Ekwurzel suggests actions:

Ekwurzel ends our talk by saying: “If you do nothing else, vote. The atmosphere’s heat-trapping ability is non-partisan … but solutions exist everywhere and every community has to take their own solutions, their own trade-offs that matter to them … Together we’ll get there faster. We can design our own future.”
That’s a better gift than anything on Santa’s sleigh.