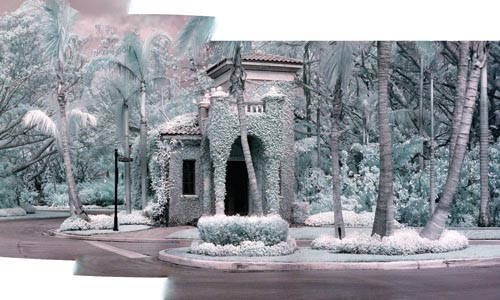 The Analytical Eye is a curious name for the first retrospective of photography by veteran multi-genre Pittsburgh artist Aaronel deRoy Gruber. The Silver Eye exhibit's title prompts us to analyze Gruber's means of analyzing her subjects.

Co-curators Linda Benedict-Jones and Graham Shearing have assembled 58 images dating from 1982-2001. It's a showcase for the 90-year-old Gruber's passion for experimenting with technology, from sepia-toning to archival inkjet printing, hand-tinting to digital manipulation.

In making half of these images, she employed infrared film or digital infrared to create one of her signature looks, in which sunlight on fields shines like snow, and cloudy skies glimmer pink; further toning and tinting often follow. The effect can offer an impressionistic oak-lined Louisiana path ("Down the Lonely Road") or the blue, white and gray moonscape of "Salt Cities of Mono Lake."

If analysis requires breaking something into its components, this is one way to do it. Indeed, such is Gruber's interest in stylizing landscapes that it's a jolt to see even the naturalistic color of "Monet's Garden Midday."

But there are many ways to analyze. In "Jekyll Island -- Wall of History" (1989), Gruber offers deep perspective on a stone ruin -- a weighty rumination. "Façade at Vezelay" show age and shadows turning an old building's straight lines curvy -- right alongside the copper-toned "Gehry Museum Side View," in which the Bilbao Guggenheim's wavy contours disrupt the expected planes, on purpose. In "Blue Bridge," a gap in the bridge's armature frames another section of the structure, creating a harmonic tension in the picture's exact middle. (It took me a minute to read the wider frame as a car windshield.)

Stranger images await: In "Gothic Banyan," for instance, the eccentric shading produced by the "halo-chrome" printing technique makes the sky framed by the tree's sinuous branches look as bulbous as boluses of heavy cream. "Florida Gatehouse" renders a small structure in preternaturally even light, pastelly pink and silvery green -- a toy building, crisp, weird and memorable.

Yet some photos in the show's "Nature" section (mostly garden and greenhouse shots) feel more decorative than analytical. Also on display is one of her best-known images -- 1997's "Downtown Pittsburgh Skyscrapers," from the Carnegie Museum's collection. It's a softly hand-colored print, the raw image shot from Mount Washington, under a cumulus-clotted sky. Such work feels more romantic than analytical.

But Gruber also offers a suite of images that express what the naked eye sees, only more so. "Pittsburgh Skyline -- A Foggy Day" captures a dynamic view from the North Side, the foreground a slash of wet pavement, the fog a skirt for riverfront buildings, the Sixth Street Bridge angling in from the left. "Steel Temple Ruins" -- shot during the construction of Homestead's Waterfront shopping complex -- offers a panorama: asphalt and bulldozed mud are the mundane foreground for the majestic anachronisms of 12 towering brick chimneys and the big puddle that reflects both them and a precious slice of sky.

Perhaps best of all is "Dream City." A dirt lot provides the extended foreground for a solemn 1997 view of the old Lawrence Paint Building, near Station Square, while in the distance Downtown's skyscrapers shine behind their Point, like a magical island in the fog. Here's romance and analysis, all at once.