A photographic museum explores the 19th century's profusion of images of dead children. 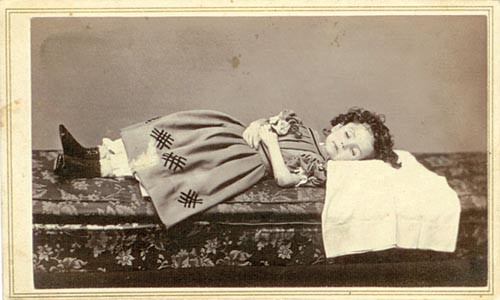 Final glimpse: A 19th-century photo of a dead child, from Bruce Klein's collection.

Dead babies are no laughing matter at the Photo Antiquities Museum of Photographic History. Their small, lifeless faces so calm, so serene, their round eyes closed for that final nap in their tiny coffins -- these dead babies are real.

The display gives a rather ominous feel to the cramped venue. The near-silence of a converted old rowhouse, the blood-red carpets, the rooms filled with photographic artifacts, all make touring the North Side museum like stepping into a Hitchcock film.

For Halloween, museum founder Bruce Klein is displaying his collection of post-mortem photographs from the mid-19th century, consisting mostly of dead babies. Rather than some macabre form of death worship, or a Dahmer-like posterity, the reason for the proliferation of these photos is quite mundane.

"I think this just came out of necessity, of people wanting that last image of their loved one before they were put into the ground," said Klein during a guided tour he offers to each visitor who wants to peruse his collection of thousands of antique cameras and images from photography's first century.

The pictures on the walls and in the cases rotate every couple months. Along with the dead children, Klein is featuring through November mug shots of several rather dapper 19th-century criminals.

The photography scholar notes the disparity between the 50 cents a photograph cost when the technology arrived in America in 1840 and the era's average hourly wage of a penny or less. Photographs of children were inaccessible to most working-class families. But infant mortality was high, and when a youngster died, the parents somehow pooled their resources and commissioned a photograph of their child's eternal youth.

Most of the anonymous children are pictured in coffins, their heads resting on pillows in the soft grays of the now-antique prints that were then on the cutting edge.

Snapshots of the dead have not ceased.

"It hasn't fizzled out," says Klein. "Actually today still, a lot of photographers go to funeral homes and take pictures of the people. A lot of times, relatives are out of the state or even out of the country and they can't make it in for the funeral and they want to see what their loved one looks like when they passed on. It happens every day."

One photograph of an elderly woman from the mid-1800s -- an anomaly in Klein's collection -- was subject to elaborate alterations. The original depicts the lady in her casket. But the photographer re-photographed the image, then reversed it. Adding color, opening the eyes by drawing on the print and coloring over the ruffling in the background to make her appear to be sitting up, the photographer "resurrected" the woman -- save for her eerie skeletal hand that apparently could not be altered.

Photo Antiquities Museum of Photographic History. 531 E. Ohio St., North Side. By appointment only. 412-231-7881 or photoantiquities.org