A photographer's curious tribute to the Civic Arena. 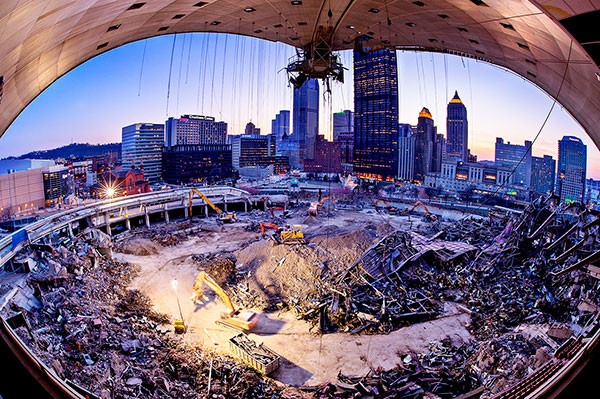 Image courtesy of the artist.
A photo from David Aschkenas' Arena: Remembering the Igloo.

Though I don't dispute that the Civic Arena deserves a memorial, Arena: Remembering the Igloo makes for a curious tribute, to say the least: mostly photographs depicting the demolition of the Arena.

David Aschkenas was the only photographer licensed by the Sports & Exhibition Authority to record the destruction. By the time Aschkenas embarked on this project, what many considered a masterpiece of modern architecture appears to have already been doomed by a combination of backroom deals, unholy alliances and corporate welfare. (Much of the parking revenue and subsequent development profits from the land under and around the Arena were given to the Pittsburgh Penguins, a franchise owned by Lemieux Group, LP.)

While the photographs capture the scale of the structure and the huge effort required to tear it down, as seen here the Arena is inseparable from the Penguins, who were however merely the final major tenant of a multi-use arena that was built for the Civic Light Opera and hosted many concerts and a great variety of sports events. A fitting memorial would feature the building in a diversity of uses and perhaps some acknowledgement of the lost potential for repurposing. That would be a very different exhibition, drawing from multiple photographers working over an extended period of time.

Of the 10,000 photographs Aschkenas shot, this 707 Penn Gallery exhibit presents about three dozen beautifully composed, technically accomplished photographs of the demolition in progress. While Aschkenas' skill is considerable, based on the photographs it's unclear what effect he meant to have on the viewer. The techniques and strategies he employs are conventional — which is not to say easy — and highly dramatizing, including ultra-wide-angle views, close-up items that pop against deep space, and rubble contrasting with glittering skyscrapers.

Lots of bad stuff makes for interesting photographs, including the worn surfaces and disorder of poverty, natural and human-made disasters, even war. Here we get a stunning visual record of one of Pittsburgh's iconic structures being downcycled into a parking lot — and someday, if we aren't too unlucky, an inoffensive development. A somewhat more effective memorial is the accompanying small book, which at least includes fond reminiscences of the Arena. Meanwhile, I prefer to regard the exhibit as a memorial to a political process that, hopefully, is behind us.