A photo show about West African funeral rites -- and with live music.

In 2000, the Duquesne graduate, now a University of Pittsburgh grad student, traveled to Ghana and was so affected by the country's music and culture that in 2005 he returned on his own, with curiosity and a camera. Photographs documenting his trips, specifically Harper's admittance to funeral rites, are currently displayed as the 709 Penn Gallery's Celebrations of Life and Death in West Africa.

Harper, a 29-year-old multi-instrumentalist, has jammed with Rusted Root, recorded his own album, Once Upon a Mind, and played with countless faces of Pittsburgh jazz and Afro-beat. In Celebrations, he puts his passion on film, and viewing just one of his photos lets you know: Death in Ghana is no mournful affair.

"It's not just people sitting around quietly; funerals, for those who are often 90 or 100 years old, are a time to celebrate life in Ghana," Harper says. "You make music constantly for days. You can go to sleep, but the music is going 24/7. People die at funerals, people make babies at funerals -- it's one of the main spiritual events."

The photographs juxtapose dancing crowds with the peaceful deceased. One image features a group of children crowded around a xylophone; another, the taut muscles and focused faces of funeral musicians.

But while there's nothing like a three-day celebration of the dead, Harper also had to attend to his studies. Sort of.

"I was trying to take political-science classes at first, but the Ghanaian-English dialect is pretty hard to understand," he says.

Harper changed his course load to ethnomusicology to match the lifestyle he wanted to live -- that of a traveling musician -- and sought out the country's best players.

On his second visit, "I was living place to place with different people. I had random gigs I was playing every Monday night so people would take me in," says Harper. "Music is everything there -- from taxi drivers honking in rhythm to making food and pounding a beat."

But the funerals really caught his ear: "I was studying with this violinist and we took a trip north. Waking up at 5 a.m. and following these guys from the village made me feel like I was on another planet. We went to a huge funeral -- thousands of people came," he recalls. "They'd hand me a violin to play, and I'd kneel to play as they danced around me, sticking money to my sweating face."

Though Celebrations allows us to see his trip, the real magic is in hearing it: "That music ... it just filters out through my playing."

Hear for yourself on Feb. 22, when a free, catered closing reception at the gallery features live West African music. The program features a mix of popular, mostly guitar-based music and traditional tunes, some featuring the xylophone-like gyil. Besides Harper himself, the musicians include Jeff Berman (percussion), Tony Depaolis (bass) and two African-born performers: Kofi Gbolonyo (percussion), a Pitt doctoral candidate from Ghana, and Elie Kihonia (percussion), the Congo-born, long-time Pittsburgh resident who founded Umoja African Arts. 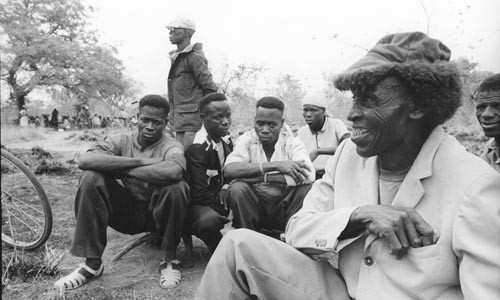