A photo exhibit at the Carnegie shows how we were Picturing Childhood a century ago. | Features | Pittsburgh | Pittsburgh City Paper

A photo exhibit at the Carnegie shows how we were Picturing Childhood a century ago. 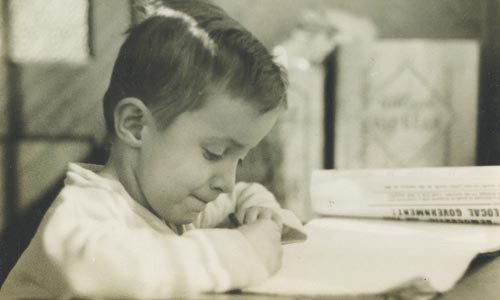 An intimate exhibition of small, personal photographs, images perhaps not originally intended for public viewing, is intriguing: the documentation of quotidian life fascinating. In a time when the digital camera has simplified and economized the recording of family history, a show of family photographs from the late 19th and early 20th centuries, when photography was too costly and demanding a pursuit for any amateurs save the most dedicated, has a certain allure.

In Picturing Childhood: Pictorialist Family Photography, c. 1890--1940, at the Carnegie Museum of Art's small Scaife Works on Paper Gallery, black-and-white photographs of middle- and upper-class family life from the 1890s to the 1940s hang on walls painted dark red. The works are by three amateur Pittsburgh photographers: Charles Hart Spencer (1852-1912), Charles H. Breed (1876-1950) and Walter Munhall (1901-1993). Spencer worked for Henry Clay Frick; Breed was employed as a teacher and headmaster, and Munhall as an engineer for Pittsburgh's water department. In their time, the three men were relatively unknown as photographers, although Breed showed work at the 1899 Pittsburgh Photographic Salon. More recognition came later: In 1997, for instance, Spencer's work was shown, at the Carnegie's Pittsburgh Revealed exhibition.

The photographs are displayed alongside selected works from leaders of the late 19th- and early 20th-century Pictorialist movement, including Alfred Stieglitz, Alvin Langdon Coburn and Clarence H White. Pictorialism aimed to affirm photography's status as fine art, by emulating painterly expression through techniques such as soft focus, lens coatings, the employment of special filters, and manipulation of the negative and print in the darkroom. The works of Spencer, Breed and Munhall demonstrate knowledge of the concerns of their professional contemporaries, and a competent, serious and investigative handling of techniques.

Breed in particular was fascinated with process: In a leather-bound book from 1910 titled "Travel Diary of Trip to France," he meticulously records technical data. A light meter, a range finder, a tripod and a Leica camera demonstrate the relatively complicated processes involved in taking a photograph a century ago.

The photographs in this exhibition are grouped by subject matter and composition. Children reading, writing and playing with toys are common themes. Other subjects include beach outings, bicycle rides, styles of dress and pets. The feel and content are both typical of any amateur family snapshots. In Spencer's "Playing with Dog," a gelatin silver print from June 1904, four children of varying ages are shown apparently absorbed in making a dog pose: standing two-legged on an upturned box. The children, as though posed themselves, stand in line behind the dog, facing the camera, though none is actually looking at it.

Yet despite the familiarity of their subjects, many works display a remarkable artistry. In Munhall's gelatin silver print "Edgar Munhall Drawing" (ca. 1938-1941), the small boy is shown totally absorbed in his work, in a very touching moment of intimacy. The perfection of the composition is coupled with soft lighting and details, such as a shaft of light across the boy's hair, that take the work beyond that of the amateur photograph.

Breed's tiny "Ann and Elizabeth, Bois de Boulogne, Paris, July 1st 1910," depicts two small girls walking along a lake. One points to something outside of the camera frame, and the other follows her direction, gazing into the distance. The work has a jewel-like quality, thanks to its small size, subtle variations of tone and strong feeling of depth.

Not coincidentally, the time period covered by this show overlaps the rise of both America's urban middle class and a burgeoning view of childhood as a time of sheltered growth and innocence. In a day when amateur photography was a pastime of the affluent -- as, indeed, much serious amateur photography still is -- Picturing Childhood explores the medium finding its role in expressions of domestic intimacy.