A one-woman show about opting out of motherhood 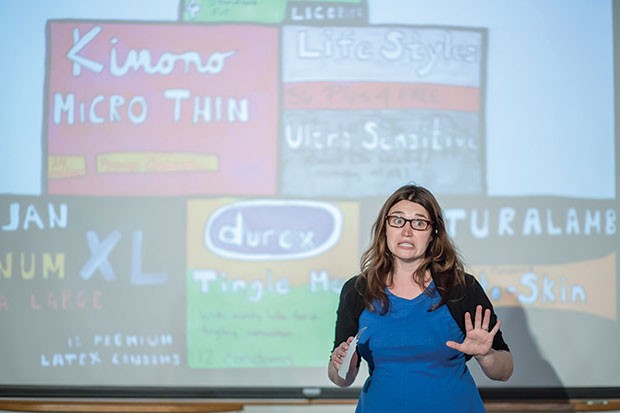 Women who don’t have children aren’t all that rare: According to a 2014 study by the Pew Research Center, about 15 percent of U.S. women ages 40 to 44 — nearly one in six — had never reproduced. So why is the phenomenon so little discussed? And why are childless-by-choice women so often made to feel somehow deficient, or just odd?

For Stacey Vespaziani, the question recalls a giant foam sperm she saw on a childhood school trip to the science center (probably the North Side’s old Buhl Planetarium and Institute of Popular Science). It was part of a birds-and-bees exhibit, and she marks the episode — the mystery, strangeness and implicit expectation surrounding reproduction — as the start of a life-long perplexity about parenthood.

Vespaziani recreates that scene in mOTHER, a play, the autobiographical one-woman show she debuted in June at the Cincinnati Fringe Festival. The hour-long show, illustrated with projected images, also played the Boulder Fringe Festival and the Chicago Fringe Festival. It receives its Pittsburgh premiere with three performances Oct. 27 and 28 at Downtown’s Bricolage Productions space, courtesy of her own Odds & Ends Productions. Lisa Ann Goldsmith directs. (The 7 p.m. show on Oct. 27 is followed by a bonus performance by touring variety show Campfireball, with live music, standup comedy and storytelling.)

Vespaziani, a Pittsburgh-area native, studied theater at the University of Cincinnati but is better known as founder of South Hills Power Yoga. At one point, she was pregnant, but later miscarried. The Dormont resident also was keenly aware of the public sympathy expressed when the Hayes bald eagles lost their eggs one year; near the nesting site, one person left a note that read, “Next year, Mom and Dad.”

Last year, a month before her birthday, Vespaziani decided, “I really need to write about this.”

Vespaziani, in her late 30s, now states firmly, “I actually don’t want to be a mother.” To learn more about why, see mOTHER. But Vespaziani notes the wide range of responses to her work. One woman “just stopped talking” after Vespaziani told her what her play was about. Another, Vespaziani says, said “Thank, you. This is something I’ve always felt but never heard anyone talk about.”