SANCHO: AN ACT OF REMEMBRANCE

Even as a black Briton, Paterson Joseph once thought that the history of free blacks in England began with its first Jamaican emigrants, in 1948. But in searching for a historical role he might play himself — such roles being scarce for black British actors — Joseph discovered the remarkable Charles Ignatius Sancho.

A portrait of Sancho from 1768 — painted by the great Thomas Gainsborough, no less — gazed out from Gretchen Gerzina’s book Black England: Life Before Emancipation. “It just looks strange,” says Joseph, by phone from London. “Because in the midst of all these images of slavery, and foreignness, exoticism, of black people, you suddenly have this gentleman, in a bright-red waistcoat, and a frock coat, looking incredibly well-groomed and very serene. And you think, ‘Who on earth is this man?’ … It’s the image that stirred me to write the play.” 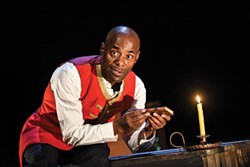 Joseph is a well-known stage and TV actor whose credits include HBO’s The Leftovers. He premiered his one-man play Sancho: An Act of Remembrance this fall in England. Its U.S. premiere was at the Kennedy Center, and on Dec. 10 and 11, the Pittsburgh Cultural Trust brings it to the August Wilson Center.

The show, co-directed by Simon Godwin, covers Sancho’s life from his birth, in 1729 — his parents were enslaved Africans — to his latter days as a London shopkeeper, musician, composer, man of letters and, in 1774, the first black Briton to vote in a Parliamentary election. Because only male property-owners could then vote, Sancho cast his ballot at a time when most white men lacked that privilege.

The self-educated, socially connected Sancho counted among his friends famed actor David Garrick and novelist Laurence Sterne. And like another noted, free 18th-century black Briton, the protagonist of the 2014 film Belle, Sancho was an abolitionist.

Sancho’s very life was a powerful argument against what Joseph calls “the invisibility” of free blacks. “Sancho is one of those great examples of a man steeped in his time, but who forced the white establishment to see that these are human beings who are being treated in this way,” says Joseph. “As long as they can articulate their thoughts, then you’ve got a chance of changing the way they’re seen.”