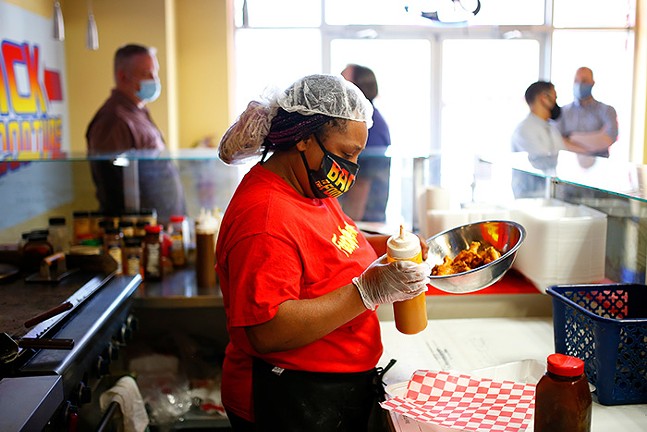 CP Photo: Jared Wickerham
Local Hidden Gem: Co-owner Angel Magwood at Back to the Foodture on the South Side
Pittsburgh loves to brag about its favorites. Once you move here, you will hear about them nonstop. There is a lot of local pride in the Steel City, sometimes too much. But many of these local favorites are worth bragging about, and with a growing food and drink scene that has gotten national attention in recent years pre-pandemic, and indoor dining beginning to return, Pittsburgh City Paper wants to provide newcomers with a bit of background on some of the region's favorite drinking and dining spots.

But the popular staples are just one part to enjoying a new city. Discovering the hidden gems is integral to becoming a Pittsburgher, a true Yinzer. To accompany the local faves, City Paper is also highlighting some hidden gems locals love but might not tell you about right away.

LF: Square Cafe. 134 S. Highland Ave., East Liberty. square-cafe.com
A hit with everyone thanks to its varied and inventive menu, including lemon-berry ricotta pancakes, this joint recently expanded into larger digs and is keeping hungry weekenders satisfied.

LF: The Abbey on Butler Street. 4635 Butler St., Lawrenceville. theabbeyonbutlerstreet.com
An inviting patio, quaint cafe, happening bar, and popular restaurant are all rolled into one place at this space that was converted from an old funeral home.

HG: Spirit. 242 51st St., Lawrenceville. spiritpgh.com
Served in the basement of a converted Moose Lodge, Spirit’s brunch offers artisan pizzas, sandwiches made from their homemade bagels, salads, cocktails, and more. Enjoy it on their patio.

LF: Driftwood Oven. 3615 Butler St., Lawrenceville. driftwoodoven.com
Something about the combination of sourdough crust, melted cheese, and tomato sauce really works at this Lawrenceville pizzeria. Enjoyed by locals, and even celebrities like Chrissy Teigen when she visits Pittsburgh.

HG: Police Station Pizza. 1007 Merchant St., Ambridge. Facebook search “Police Station Pizza”
Best place in Pittsburgh to try the regional Ohio Valley Pizza style, which is a light and crunchy square crust, covered in sweet tomato sauce, and topped with cheese and toppings after the bake, so they melt just ever so slightly. Worth the 30-minute drive from Downtown.

HG: Spak Brothers. 5107 Penn Ave., Garfield. spakbrothers.com
With both meat and vegan options, this take-out pizza shop in Garfield is a sandwich gem. Try the seitan cheesesteak, one of the best in Pittsburgh, and it doesn’t even use real meat.

LF: La Gourmandine. Multiple locations. lagourmandinebakery.com
This French bakery, known for its baguettes and tasty pastries, has been expanding throughout Allegheny County, and for good reason. Their baked goods are also sold at shops and stores throughout Pittsburgh.

HG: Madeleine Bakery & Bistro. 609 S. Trenton Ave., Wilkinsburg. madeleinepgh.com
Tucked away on a side street in a charming public courtyard, this hidden gem also makes some of the best bread and pastries in the city. The egg sandwiches on brioche buns are excellent.

LF: Showcase Barbecue. 6800 Frankstown Ave., Homewood. showcasebbq.net
Strong smoke flavor and ribs, both turkey and pork, that have an incredible char. Cover it all in a unique, sour/sweet homemade barbecue sauce this Black-owned business specializes in. 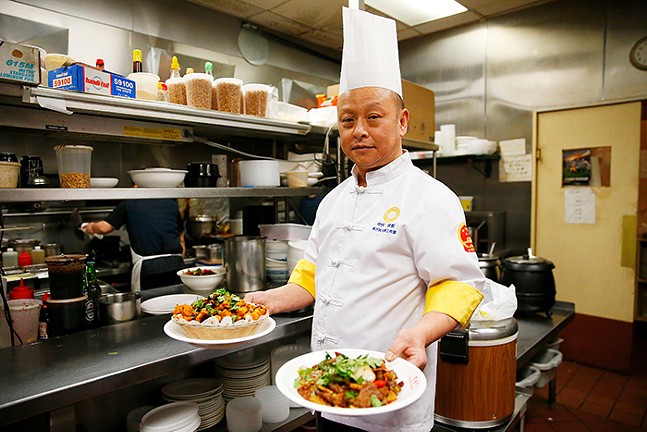 HG: Chengdu Gourmet. 5840 Forward Ave., Squirrel Hill. chengdugourmetpittsburgh.com
Pittsburgh’s most authentic and best Chinese restaurant, serving spicy Szechuan specialities on a seldom visited street. The lamb cumin is one of the best dishes in the region. 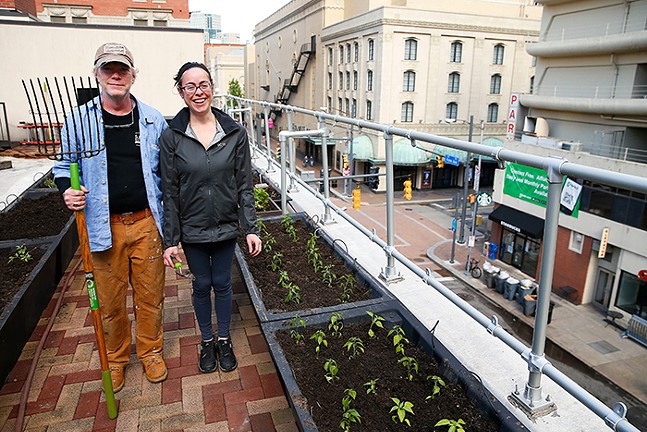 LF: Gaucho Parrilla Argentina. 146 Sixth St., Downtown. eatgaucho.com
Steak cooked over open flames, dipped in some rich and herby chimichurri, is one of the world’s perfect culinary combos. And Pittsburgh is lucky to have an expert in the heart of Downtown.

HG: The Colombian Spot. 2019 E. Carson St., South Side. thecolombianspot-pgh.com
Get all your South American flavors stuffed into a giant corn dumpling known as an arepa, and wash it down with some fresh tropical juices imported from Colombia.

LF: Lorelei. 124 S. Highland Ave., East Liberty. loreleipgh.com
Serving up classic cocktails like Old Fashioneds, Gimlets, and Sours with some German and Italian influences. And there is a German-style beer hall in the back, too!

HG: Maggie’s Farm Rum. 3212a Smallman St., Strip District. maggiesfarmrum.com
Tucked away in an industrial warehouse, this craft distillery makes the finest rum in the country and has the awards to prove it. Fittingly, that rum makes some fine cocktails. The Painkiller is addicting.

LF: Independent Brewing Company. 1704 Shady Ave., Squirrel Hill. independentpgh.com
If you want to really explore all of Pittsburgh’s best locally made beer, this is the place. Always featuring some of the best, and freshest craft breweries, not to mention some great European varieties that pair well with its excellent food.

HG: Bulldog Pub. 1818 Morningside Ave., Morningside. thebulldogpub.com
Tucked away in the quiet residential neighborhood of Morningside, this haunt features a great outdoor space to go with its truly impressive rotating beer list. Odds are you find a new favorite brew.

LF: The Goldmark. 4517 Butler St., Lawrenceville. thegoldmark.com
Perfect bar for watching the Pens or the Pirates while chasing your shot with a refreshing brew. They have multiple shot and beer combos to enjoy. DJs arrive later and the bar converts to a club vibe. 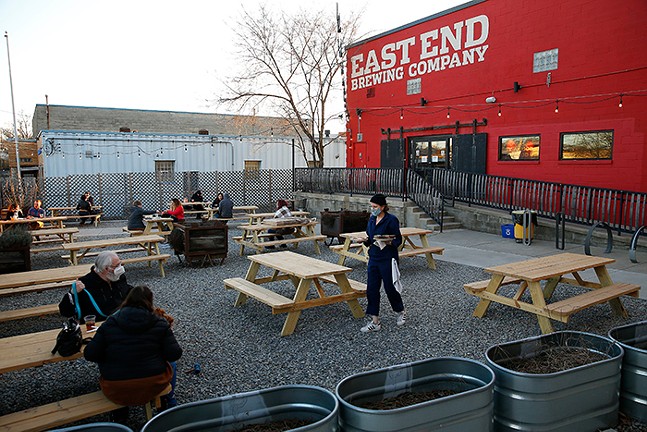 HG: Old Thunder. 340 Freeport Road, Blawnox. oldthunderbrewing.com
New brewery on the scene and located in seldom-visited suburb Blawnox, Old Thunder is quietly making some of the best beer in Pittsburgh. Worth a trip.

LF: Allegheny Wine Mixer. 5326 Butler St., Lawrenceville. alleghenywinemixer.com
Named after a joke in the movie Step Brothers, this hip wine bar in a hip neighborhood is great for mingling, tasting fancy cheeses, and glugging wines from around the world.

HG: Thai Cuisine. 4627 Liberty Ave., Bloomfield. thaicuisinepgh.com
Staple on Liberty Avenue for years, and a neighborhood favorite. The green curry is outstanding and hard not to order every time.

HG: Udipi Cafe. 4141 Old William Penn Highway, Monroeville. 412-373-5581
Bare-bones establishment (it doesn’t even have a website or social media), but more than makes up for that in flavor and variety. Specializes in meat-free South Indian dishes, including dosas — rice crepes stuffed with spices, chutney, and cooked vegetables.

LF: Carmi Soul Food Restaurant. 1825 E. Carson St., South Side. carmirestaurant.com
All the gut-busting staples you can imagine, not to mention amazing fried catfish and a signature fish stew. Denzel Washington visited the Black-owned restaurant when he was in Pittsburgh filming.

HG: Ribs N Bread. 4704 Centre Ave., Oakland. ribsnbread.weebly.com
Take-out only joint that slowly cooks up some succulent ribs covered in mustard-style barbecue sauce inspired by the owner’s South Caroline upbringing. Don’t miss out on the collard greens, mac and cheese, or the cornbread either.

HG: Salem’s Market and Grill. 2923 Penn Ave., Strip District. salemsmarketgrill.com
Cafeteria-style joint with an extensive menu where everything satisfies. Try the plethora of Mediterranean dishes, like kabobs, or even grab the burger — some people swear by it.

HG: Back To The Foodture. 2767 E. Carson St., South Side. Facebook search “Back To The Foodture”
Home to some of the most deliciously greasy food around, and the first Black-owned business in SouthSide Works. Dozens of unique items, including tons of wings and a cheeseburger that uses donuts for buns. Trust us, it works.

LF: Apteka. 4606 Penn Ave., Bloomfield. aptekapgh.com
Somehow takes meat-centric traditions of Eastern Europe and transforms them into vegan plates, creating some of the best dining in the city. Great cocktails, too.

HG: Huszar. 627 E. North Ave., North Side. huszarpittsburgh.com
With a chef directly from Hungary, this restaurant might resemble a dive bar, but its goulash is the best you can find in Pittsburgh.

LF: Eat’n Park. Multiple locations. eatnpark.com
A place for an inexpensive egg and toast breakfast, or a nice salad bar. Enjoy the delicious pies or order some grilled stickies with ice cream. Grab a Smiley Cookie on your way out the door.

LF: Millie’s Homemade Ice Cream. Multiple locations. millieshomemade.com
Freshly made waffle cones invite just about everyone to try this local ice cream favorite that has been expanding throughout the region and partnering with many Pittsburgh groups.

HG: Antney’s Ice Cream. 1316 Poplar St., West End. facebook.com/antneys
Rotates through dozens of inventive flavors every summer. All of them are good. Located on the edge of strip mall parking, careful or you will miss it.

LF: Umami. 202 38th St., Lawrenceville. umamipgh.com
This Japanese-style pub’s lengthy menu offers everything from ramen to taiyaki, fish-shaped pancakes stuffed with sweetened adzuki beans, but the sushi is worth the trip alone. The sashimi is fresh, and a list of sushi plates offer a wide selection.

HG: Andy’s Sushi. Wholey’s Market, 1711 Penn Ave., Strip District. wholeyscurbside.com/andys-sushi
Wholey’s Market is one of the best places in the city for home cooks to buy fresh seafood, and for over 25 years, Chef Andy has been serving up some of the city’s best sushi and conversation from a small counter inside the shop. Grab a roll for lunch as you shop for dinner supplies.

LF: Federal Galley. 200 Children’s Way, North Side. federalgalley.org
This popular locale combines a rotating list of small restaurant businesses underneath a large and inviting venue complete with a marvelous outdoor patio. Not to mention some great cocktails and drinks from the in-house bar.

HG: The Pennsylvania Market. 108 19th St., Strip District. thepamarket.com
Five food vendors, four bars, and three retailers all inside a two-story complex on a side street in the Strip. Wine, charcuterie, tacos, pizza, and craft beer all at your fingertips.

Page Dairy Mart is open for the season, and the Chocolate Chip Cookie Sundae is a can’t miss