A new Pittsburgh SportsWorks exhibit explores the science of fear

By Rebecca Addison and Carley Bonk

You’re standing at the top of a mountain. Maybe it’s 8 feet above the ground; maybe it’s 80. But either way, as you peek over the edge, your heart starts racing, and you feel lightheaded.

For anyone with acrophobia, or a fear of heights, these symptoms are familiar and difficult to overcome.

But a new exhibit at the Carnegie Science Center’s Highmark SportsWorks facility can help you conquer this fear, or at least learn more about the science behind it. The Ropes Challenge course allows visitors to explore the physiology of fear and thrills, along with how you perceive the world around you.

“It gives us a really great way to explore the science of balance, but also the science of fear,” says Matt Needles, education coordinator at the Science Center.

The exhibit, which opened June 19, features a 20-foot-high course with 11 different rope and steel obstacles, including a rope bridge, rolling logs and a horizontal net. The main feature is a 60-foot-long zip line that serves as a sort of reward for overcoming your fears and completing the obstacles.

The course can be daunting for some, whether they have a fear of heights or not.

In order to put visitors at ease, Needles talks about the science behind the exhibit. He also explains that the harness attached to each visitor is weight-tested to support up to 5,000 pounds. But sometimes these explanations aren’t enough. One visitor wasn’t convinced to take on one of the obstacles until Needles sat down into his harness and hung securely from it.

“And once he saw that, he was OK,” Needles says.

Through the course, visitors can also learn about the elements involved in the science of climbing such as center of mass and inertia.

The Ropes Challenge has replaced many of the exhibits previously housed in the SportsWorks facility, including the roller-coaster simulator and trampoline exhibit.

“We always like to keep our exhibits fresh,” Rible says. “With our trampoline, it was really fun, but we could only get one person on at a time.”

The new Ropes Challenge can accommodate 20 visitors at a time. And the Science Center capitalized on the space by building a SkyTykes ropes course beneath the larger exhibit for the younger adventure seekers.

Visitors must be at least 48 inches tall, and there is a weight limit of 300 pounds. All visitors must wear closed-toe shoes with backs in order to participate in either of the exhibits. 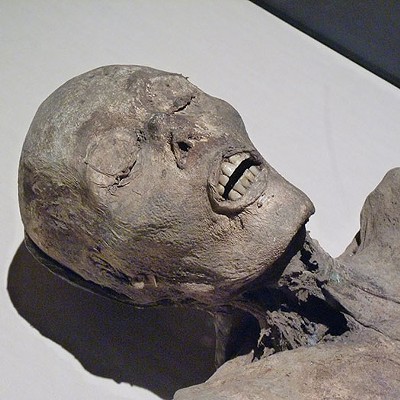 UPMC and Highmark agreed to a new contract ensuring patient access. What’s next?