A new home for microcinema in Pittsburgh

Out of the ashes of Pittsburgh Extreme Radical Video came Blockbuster Video, a hub for short DIY films.

In the 1990s, as grunge filled the airwaves and magazines such as Bust and Bitch pushed the Riot Grrrl movement, another underground form of media emerged in San Francisco: microcinema.

This DIY movement features low-budget, amateur-produced short films that arrived in Pittsburgh through Pittsburgh Extreme Radical Video — a series of microcinema events that brought together local filmmakers. As those filmmakers left the area or moved on to other projects, Joshua Rievel and Lenny Flatley refused to give in to fading out.

Blockbuster Video (named after the late chain that ruled from the late 1980s to the early 2000s) “came out of the ashes of Pittsburgh Extreme Radical Video,” Rievel says. As the series approaches its one-year anniversary, Blockbuster Video will hold its fourth public microcinema showing on May 25.

“The events have been very well-received, and the turnout is bigger each time,” says Flatley. “It’s obvious that Pittsburgh wants someplace to go and watch oddball short films by oddball short-filmmakers.”

Those “oddball short films” don’t fall neatly into a single category. Anything from comedy to abstract is fair game. Many are created on actual film instead of digitally, especially movies Rievel and Flatley selected for the screening (May 25). While they tend to prefer films that have a good sense of humor or take a firm stance, quality, not the topic, influences their selections.

Since almost anything can wind up on screen, Rievel encourages attendees to keep their minds open.

“I just hope people come to the screen ready to see something new and exciting,” he says.

Rievel and Flatley thirst for fresh, creative content, and thus watch whatever they can get their hands on. This never-ending search, combined with growing support for Blockbuster Video’s events, has led to their names gaining recognition within the world of microcinema.

“We’re starting to get a bit of a reputation, and people are coming to us whenever they have new stuff, which is pretty sweet,” Flatley says.

Adds Rievel: “[The events] seem to be well-received, and I hope it only encourages people to make videos.”

folkLAB reimagines folklore in the voices of the oppressed 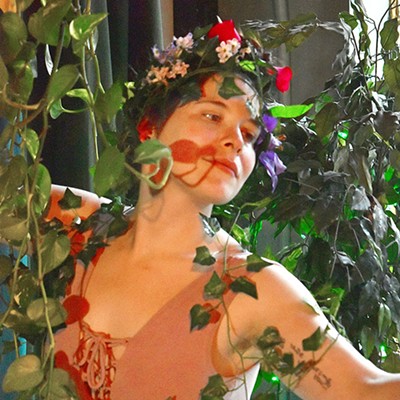