A new exhibition highlights the crossroads of contemporary art and science 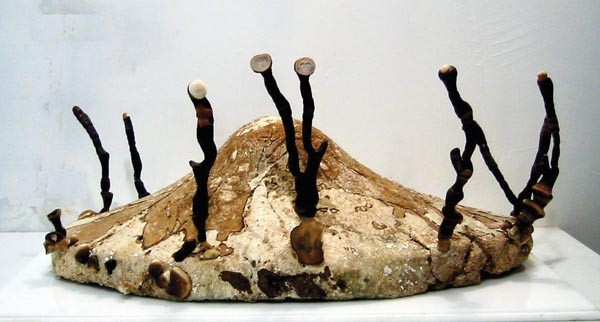 Philip Ross' sculptures might be ancient or ahead of their time — prehistoric or post-apocalyptic. They are both beautiful and bulletproof — literally: His component bricks are feather-light and Kevlar-tough. And with them, Ross has built work that similarly crosses fluidly between the practical and the purely beautiful.

His work in Intimate Science, on view at Carnegie Mellon University's Miller Gallery, functions as architectural experiment — the ruins of a home's corner wall; a gallery-sized arch from an aqueduct — and as plinth-ready sculpture. These are designs for the mantle or the museum.

But what makes Ross's sculptural pieces hum is their materials, which are neither found nor forged, but grown. The Los Angeles-based Ross is a long-time proponent of crossing contemporary art with botanical and biological studies: His installations include more than two dozen made of Reishi mushrooms, grown by Ross into solid bricks for use in his sculptures and fungal architecture.

Such work lies at the heart of Intimate Science, which examines how the 21st century's rampant autodidacts question, and shift, decades-old dichotomies between research and culture, fact and myth.

Even as research such as the Human Genome Project has made science increasingly intimate, the relationship between people and science has become more distant. A strange "left brain/right brain" cultural chasm has grown between art's warm aestheticism and science's cold, hard facts ... between the unsayable, spiritual aspects of our lives, and demonstrable, reproducible science.

Such a chasm is anathema to the artists in Intimate Science, artists whose work approaches scientific research with a sense of respectful playfulness. With open-source biology and genetics for the whole family, Intimate Science approaches the possibilities of combining artistic creativity with scientific disciplines, and questions technocracy without questioning the facts of science itself.

Seattle artist Allison Kudla's "Capacity for (urban eden, human error)" (2009) uses a computer-controlled machine to slowly deposit a syrupy biological "ink" — composed of moss cells and an incubating fluid — onto a table-sized sheet of material primed for plant growth. During the exhibition, "Capacity" will grow a design based on the Eden growth model, a fractal pattern that describes the growth of bacterial colonies and, allegedly, is analogous to the patterns of urban sprawl. A comment on both the mechanization of biology and the biological roots of societal troubles, "Capacity" also flaunts a fundamentally simple premise: that patterns and imagery become almost inexplicably more beautiful when expressed through living things.

The Tokyo artist collective BCL approaches a similar premise from the opposite direction. In "Common Flowers/Flower Commons" (2009), the artists hack Japanese company Suntory's "Moondust" — a carnation which Suntory has genetically modified to be blue, and which is sold commercially as a trademarked product. Using items purchasable at the supermarket, BCL shows how to clone the flowers, bringing these living things back into common ownership as open-source genetics.

Hacking is at the heart of L.A. collective Machine Project, as the group's video documentation of workshops shows. In its L.A. "Confuse-a-tron" event, four separate workshops — on basic plant-cloning, kimchi-making, organic-electronic musical instruments and drag makeup — were mashed together into a four-ring circus of hacking scientific and cultural processes. And in Pittsburgh, the weekend of Intimate Science's opening, "Mind Reading for the Left and Right Brain" taught a full class techniques for reading a partner's emotional state, and how to build a very basic lie detector. With a split-screen video showing both sides of the workshop, Machine Project creates a whole — a Venn diagram of mind-reading techniques that, in the sweet spot in the middle, makes the impossible seem likely.

Pittsburgh is already building a reputation as a center for artists working at the crossroads of science, technology and art, and the home team is well represented in Intimate Science by CMU-based artist Rich Pell. Pell's Center for PostNatural History is a small installation of pieces from the artist's natural-history-museum-styled project collecting and exhibiting organisms at "the crossing of two historical narratives: One biological; the other cultural." By presenting organisms such as a Transgenic American Chestnut Tree, resistant to the fungus that has all but killed off this plant, and a mosquito genetically altered to no longer be able to transmit malaria, the CPNH asks its viewers to reconsider what constitutes "natural history." (A permanent Center for PostNatural History opens on Penn Avenue, in Garfield, in early March.)

The genesis of Intimate Science also has its basis in Pittsburgh. Guest curator Andrea Grover spent a semester at CMU's STUDIO for Creative Inquiry, creating an accompanying book (New Art/Science Affinities) and developing the show, which will tour California and Connecticut later this year. The show is bold yet accessible; complex yet enjoyable, and represents an important step for the city's burgeoning art-science-hybrid scene that may perhaps be looked back on in future years as a turning point.