A New Death at Throughline Theatre

It's interesting watching playwright C.S. Wyatt construct a cosmology by divine law, but for a comedy it's airless and deadly. 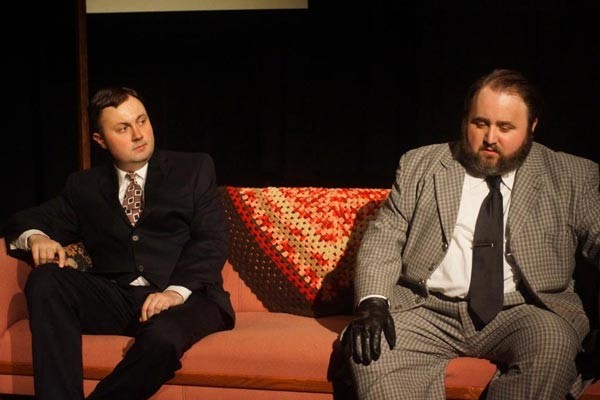 Theater's cruelest illusion? That comedy is fun. Wringing a tear from an audience is simple; getting and keeping them laughing is nearly impossible, as demonstrated in Throughline Theatre Co.'s premiere of A New Death, by local playwright C.S. Wyatt and directed by Kaitlin Kerr.

Wyatt's thesis: When someone dies, two entities get busy. A Messenger of Death tells the deceased that time is up, and The Grim Reaper carts away their souls.

Such a labor-intensive routine requires bureaucracy. The messengers are supervised by layers of middle management watched over by archangels who, ultimately, report to the Big CEO in the Sky.

Enter Harlan Howe. A resolute loser, Harlan's life has been a series of bad jobs done poorly. By accident he winds up as a messenger-trainee, and his klutzy ways soon bring the hulking bureaucracy to a halt.

Wyatt is aiming for two comedy pay-offs: mundane corporate-think juxtaposed with the sadness of death, and the merry mix-ups of a Charlie Brown-like figure.

With the usual (but no less relevant) caveat that the premiere of any comedy is going to be bumpy, I'd still have to say that Wyatt misses more than he hits.

The playwright gets lost inside his own Byzantine corporate maze. Great stretches are spent delineating the rules and regulations of his imagined world. Right up until the very end, Wyatt is still doling out exposition about what is and isn't real inside the play. It's interesting watching him construct a cosmology by divine law, but for a comedy it's airless and deadly. And in place of all that description, he needs to supply about 10 times the number of gags, all funnier than what's there now.

The director has been a bit too literal about the title, furnishing an almost funereal pace. The endless pauses and low-energy acting are the exact opposite of what comedy demands.

Eric Leslie plays Harlan with a winning, endearing quality, and Andy Coleman, as his boss, displays some much-needed comedy style.

It's a cliché, but appropriate for this play: On his deathbed, Edmund Gwenn famously said: "Dying is easy, comedy is hard."