At some point, Front Porch Theatricals is going to stop presenting one glorious production after another … but not yet 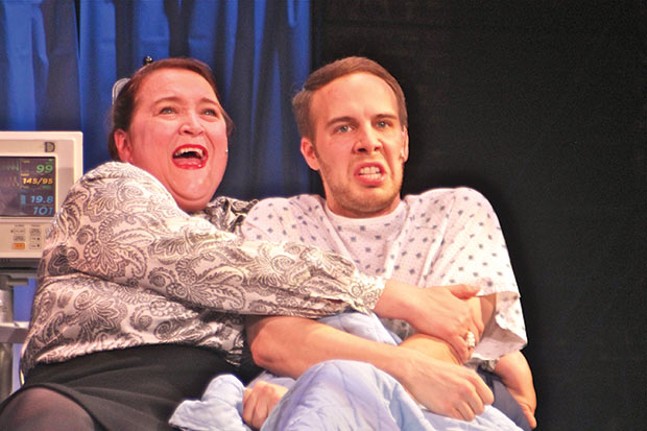 There aren’t many people who could turn a vascular anomaly into musical comedy, but William Finn did just that with A New Brain. Not just a musical comedy, it's a show filled with what may be some of the most beautiful music ever written.

Finn is best known as the lyricist/composer of Falsettos – just a few weeks after he won the 1992 Tony Award for that show, he collapsed and was diagnosed with an arteriovenous malformation requiring Gamma knife surgery (a form of radiation).

He would later say the music just flowed out of him once he got out of the hospital. That set of songs would eventually become A New Brain. It's the story of a composer – Gordon Schwinn – who fears that his brain surgery, if it doesn’t kill him, could render him unable to ever write another song.

The show, with a book by Finn and James Lapine, played off-Broadway in 1998 and quickly became a cult favorite, packed with songs that shimmer and soar, that are in turns deeply moving, joyous and, yes, healing.

At some point, local company Front Porch Theatricals is going to stop presenting one glorious production after another … but not yet. It just opened A New Brain, directed by local favorite Connor McCanlus, and the result is a breathtaking parade of some of the most dazzling performers you’re likely ever to see.

Did John Wascavage, as Schwinn, rip you to shreds with “And They’re Off”? Well, no time to recuperate because here comes Drew Leigh Williams singing “Change” with the force of a tornado. Just as your pulse is returning to normal, Jeremy Spoljarick overwhelms with the achingly gorgeous “I’d Rather Be Sailing.” But you’ll need to reserve your strength since there’s still Becki Toth’s one-two punch of “Throw It Out” and “Music Still Plays On.”

By the time the whole cast comes together, including Matthew J. Rush, Meredith Kate Doyle, Brady D. Patsy, Mei Lu Barnum, Lauren Maria Medina, Pierre Mballa and David Ieong – with music director Deana Muro and her excellent band – their performance of the finale, “I Feel So Much Spring,” renders you a sobbing mess.

Director McCanlus does get a little lost in some of his concepts, especially a hallucination sequence which misfires, but he has brought this specific cast together and created musical perfection with them.

Front Porch has done it again.