Kaufmann’s was a purveyor of contemporaneity, not simply the focus of nostalgia that it has become. 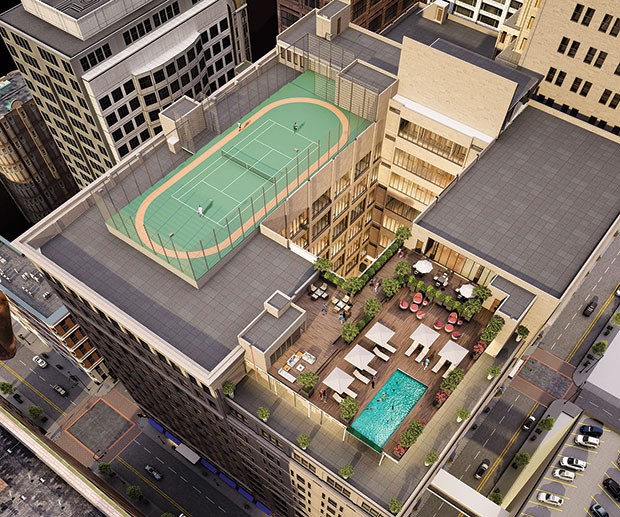 When I was a kid, my grandmother performed a minor feat of time travel, appropriately enough at the Tic Toc restaurant in the venerable Kaufmann’s Department Store, during a busy holiday-shopping day. Faced with a long line, she transported us 45 minutes into the future, to a moment when our table was available. Actually, she was pals with the hostess, who let us jump the queue, not really the space-time continuum. But recollections and reconstitutions of the old department store are conjured so powerfully by both nostalgia and prognostication that they seem to bounce through time itself.

As holiday season begins, two prominent enterprises aim to reconstitute Kaufmann’s. Their methods, scales, and approaches to history could hardly be more divergent. Yet they put each other in perspective precisely because of these differences.

The book Kaufmann’s Department Store, by Melanie Linn Gutowski and the Senator John Heinz History Center, collects and annotates images from the now-defunct store’s 135-year history — a straightforward framing of the past. Gutowski’s book is part of Arcadia Publishing’s series of regional-history photobooks, of which there are dozens locally and literally thousands nationally. You could probably do all your holiday shopping within the range of available titles. Gutowski’s previous volume in the series, on Pittsburgh’s mansions, demonstrates her research skills and alacrity with the publication format, which is appealing in its profusion of images and yet challenging for the concise text required by the publishers.

The Kaufmann’s volume, complete with its foreword by Rick Sebak, is a welcome entry on a beloved subject. Among its themes is a reminder that Kaufmann’s was really a purveyor of contemporaneity and change in its heyday, not simply the focus of nostalgia that it has become. Twentieth-century store magnate Edgar Kaufmann earned fame for bringing merchandising trends and spectacles from overseas, whether from the French-inspired International Exposition of Industrial Arts of 1926 or the longer-lasting trend toward Modern design in ensuing decades. The Vendôme, the boutique within the store that his wife, Liliane, operated, earned its lasting caché from her keen sense of French fashion and couture.

Likewise, though Kaufmann’s is and must be a carefully cherished landmark, it is really a complex of changing buildings, not just one. The store unceremoniously tore down its first Smithfield Street building, the Grand Depot of 1885, to build the current corner wing to designs by Janssen and Abbott very rapidly in 1913 in order to stave off competing (and soon bankrupt) family members Kaufmann and Baer. Kaufmann’s also tore down Alden and Harlow’s landmark Carnegie Building to build its windowless Annex in 1954.

The voracious destruction of landmark Downtown buildings is a part of the past that we don’t miss. But it is this sense of change, not a fruitless desire for history trapped in amber, that should inform consideration of Core Real Estate’s Kaufmann’s Grand on Fifth project, now underway but not complete, which aims to renovate the department-store complex with a high-tech, multi-use program of residential, retail, hotel, parking and recreational functions.

The model residential units, unveiled in late October, look a lot like the future. Touted in press materials as “the first fully automated, integrated command lifestyle technology in Pittsburgh.” Their Amazon Alexa command system allows residents to simply speak to actuate changes in heating, lighting, window shades, and other conveniences in the 311 apartments. The building will be full of high-tech and currently fashionable amenities — an infinity pool, track and tennis court to accompany the rooftop restaurant. A fitness center, bike storage and repair, a virtual-reality game room. A number of observers have already commented that the gadget-laden apartments are like a toy store, perhaps from a millennial generation’s view of the future. An aging GenXer might yearn for the old days of Kaufmann’s ninth floor, but that is clearly a memory, not a marketing plan.

To their credit, the developers looked at a healthy mixture of past and future, uncovering historic windows that had been concealed and preserving one of the memorable old wooden escalators. Says Core president Michael Samschick, “I love the historic fabric of the building. It’s exciting to weave the new features back into it.”

That approach was sorely necessary. After years of slow decline, reduced use, deferred maintenance and an absurd name change, the old building is named Kaufmann’s again, and the promise of new and up-to-date components is an appealing one. If history is any guide, they are not surprising, but rather expected on this site.