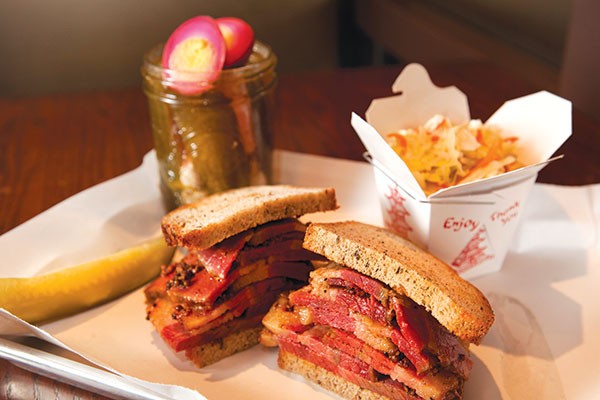 Often, it seems like the rich culinary tradition of European Jews has been worn down to a couple of clichés, like chicken soup and pastrami on rye. Even when the representation of foods is broader, it frequently isn't very deep, as for instance in delis where only one kind of knish or babka is for sale.

Now, Nu Modern Jewish Bistro, in Squirrel Hill, steps up to fill that vacancy, bringing with it both breadth and depth in its exploration of the pleasures of Eastern European Jewish cuisine. And while the words "modern Jewish bistro" may at first seem oxymoronic, in fact the food on offer is well suited to recent trends of revisiting old-fashioned comfort foods, indulging in animal fats, and utilizing all parts of an animal, including those not traditionally consumed on American tables.

Nu's style is up-to-date, too. Food is served on wax paper on steel trays, and fried goods come in miniature versions of fry baskets. But we were glad "modern" did not extend to mean an attempt to reinvent the well-turned wheel of Jewish cooking. At Nu, matzoh-ball soup is matzoh-ball soup, and the egg cream is not tarted up with artisanal marshmallows or lavender essence.

Some touches are distinctively modern, however. Fried pickles are hardly traditional, and the tabletop condiments include "apple ketchup" and housemade whole-grain mustard. A few Sephardic/Mediterranean dishes reflect the Jewish diaspora while offering something for those seeking to go beyond meat and starch. And, while a corner of the menu is dedicated to simple, classic deli sandwiches, available on a variety of excellent breads, there are also coy takes on the sandwich traditions of other cultures. The Jewbano, for example, approximates the effect of decidedly non-kosher ham and roast pork with brisket and "Montreal meat," described (in the glossary on the back of the menu, no less) as a sort of Canadian hybrid of corned beef and pastrami. This plays the role of savory, slightly smoky ham, while the brisket offers the tender meatiness of a good roast.

Nu's menu, which trades lightly in Jewish humor and Yiddishisms, calls chicken soup "Jewish penicillin." But the broth was no joke: smooth and golden, yet powerfully flavorful and completely satisfying even without the optional additions of matzoh balls, dumplings or noodles. Another soup, a wintry chick pea-tomato, was hearty, tasty vegetarian fare, but animal abstainers, take note: This chalkboard special was one of the few vegetarian-friendly items on offer.

An appetizer platter let us try nearly all of Nu's starters. The fried pickles, thick disks in substantial breading, were bite-sized and addictive, while latke tots were golden brown with creamy centers and loose tendrils of potato, fried crisp, outside. The apple ketchup offered some of the tartness that makes tomato ketchup so satisfying with fried potatoes, as well as the juicy sweetness of applesauce. A blintz — ground brisket, garlic and onion rolled in a thin pancake wrapper — was meaty and delicious. Finally, a pierogi-like kreplach featured more ground-brisket filling, this time in a hearty egg-noodle wrapper, topped with gribenes. This mixture of diced onion and chicken skin, fried in schmaltz (chicken fat) until the onion melts and the skin crisps, is one of the all-time great garnishes.

Jason ordered two sandwiches, one a classic brisket on rye, the other a "knishwich," an innovation wherein hearty fillings are packed in the flaky dough of a knish, which traditionally is filled with mashed potatoes. Jason's was a special, called "ABC" for apples, brisket and cheddar. The apple lightened and brightened the meat while the cheddar added a bit of richness within a wonderful, pastry-like crust. Creamy horseradish was an excellent companion.

And then there was the Montreal meat sandwich. In Montreal — arguably North America's greatest spot for delicatessen these days — brisket is prepared by brining, curing, smoking, then steaming the meat. Nu does this in-house and slices the resulting, meltingly tender meat into thick slices that are probably the best form of brisket Jason has ever had. This meat was incredible, and the Russian rye it was served on was no slouch, either.

Angelique's "BLT," also served on this excellent rye, subbed in schmaltz-fried chicken skin that was at least as good as bacon, and added a schmear of chicken-liver paté for richness. An optional fried egg took this sandwich to the next level of delight.

Nu makes the argument that Jewish cuisine deserves to be served alongside the world's favorites. Its ability to transform once-stodgy dishes into thrilling experiences has us convinced.