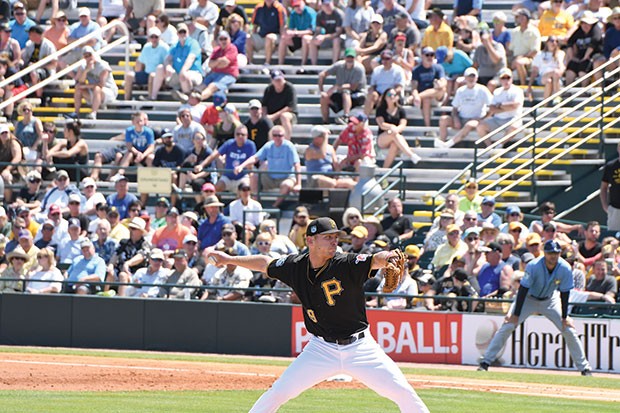 CP photo by Charlie Deitch
Chad Kuhl and the Pittsburgh Pirates have had some issues this season. Luckily the rest of their division has, too.

It’s that time of the year when baseball is the only game in town; the sliver on the calendar when PPG Paints Arena and Heinz Field are used only for concerts. As we approach July, the Pirates are the only major sports team to complain about. That is until Mike Tomlin makes his first mistake of 2017.

Despite some major setbacks, the Buccos — just like the cult-favorite Bruce Willis movie that was filmed here in the ’90s — are within striking distance.

Starting center fielder Starling Marte set the tone early when he was suspended for 49.99 percent of the regular season for using performance-enhancing drugs. Drugs and alcohol have really caused some major problems for our team. Starting third baseman Jung Ho Kang recorded his third DUI, a team record, and that infraction has kept him in South Korea. The Pirates replaced these two good-time Charlies with Adam Frazier and David Freese, both of whom celebrated by immediately spending time on the disabled list.

Rookie pitcher Tyler Glasnow impressed everyone in spring training, and followed that up by impressing no one in the regular season. After seeing more than seven runners cross home plate every nine innings he pitched, Glasnow was mercifully sent back to Indianapolis. Tony Watson’s blown saves cost him the closer job, but earned him a spot as a social-media punching bag. The level of ire reserved for one of the Pirates’ best relief pitchers in recent history is high. Heights only reached by cornerbacks who drop interceptions, running backs who fumble too often, goalies who have one bad game, and Pedro Alvarez. Watson’s bullpen-mate Daniel Hudson was one of only two signings in the off-season (Ivan Nova being the other). But the Hudson deal is a bad one so far.

Andrew McCutchen, Jordy Mercer and Francisco Cervelli all started the season batting around the .200 mark. Gregory Polanco was mediocre, got hurt and returned 2 percent better. The Pirates bench has been a rotating collection of highly numbered forgettables taking up space. Guys with jerseys reading Gosselin, Moroff, Ngoepe, Hanson and Bostick. Those five were sent to the plate a combined 178 times and returned to the dugout with their heads down 146 of them. Chad Kuhl and Trevor Williams are clinging to the rotation out of necessity even though their ERAs hover in the fives. And if that wasn’t enough, young phenom pitcher Jameson Taillon was diagnosed with cancer.

But while that sounds like an unrecoverable train wreck of a season, the Bucs are still in it. Thanks to solid pitching by Nova, Taillon and, occasionally, Gerrit Cole, the rotation has kept the rest of the team treading water. Give GM Neal Huntingdon credit for acquiring Felipe Rivero. Mark Melancon posted some of the best numbers ever by a Pirates reliever, but Rivero has looked even more unhittable. Juan Nicasio has made the transition from shaky starter to reliable set-up man; innings eaters Edgar Santana and Jhan Mariñez have been pleasant surprises. Catcher Elias Diaz and utility man Jose Osuna fall into that category, as well as adding much-needed depth.

Not stopped by their earlier troubles, Andrew McCutchen and Jordy Mercer have been pounding the ball since May. Josh Harrrison, Adam Frazer and David Freese have been consistently good all year as well. But the real reason the Pirates are still in it is because no one else in the division is much better.

The National League in 2017 breaks down like this: Four outstanding teams (Dodgers, Nationals, Diamondbacks, Rockies); three terrible teams (Phillies, Padres, Giants); and eight teams that are just OK. The experts told us that the Cubs would run away with the division, but the most arrogant .500 team ever assembled has hovered around that mediocre mark all season. These Cubs have been tagged as a superstar dynasty in the making, like U2, Metallica or the Red Hot Chili Peppers, but they might (hopefully) turn out to be more of a one-hit wonder like Gnarls Barkley, Juice Newton or Chumbawumba. The Brewers have overachieved with a roster of nobodies, and that seems unlikely to continue. The Reds were bad last year, but they may even be worse this year, while the perennial golden boys of the division, the St. Louis Cardinals, have been very un-Cardinals-like all year long.

So you’re saying there’s a chance?

If Marte returns with a vengeance and the top three pitchers continue to progress, if McCutchen and Mercer continue their streaks and the bullpen is solid, then yes, there is a chance. If either Gregory Polanco or Josh Bell musters just a little consistency to help raise the Jolly Roger a few more times, they could win the division. Forget the Wild Card this year, the Pirates are already over 10 games out of that. For the Pirates, if they’re not first, they’re last. While some folks may be sad that there’s only one major sport on right now, baseball fans are ecstatic because this is the one time of year when the game never gets interrupted by a kickoff or a puck drop. In a way, it’s the best time of the year. And if the Buccos keep battling back, it might turn out to be better than Christmas.