A Mattress Factory show gets into the walls ... and floors

The exhibition transforms this house into a more personable, intimate and vulnerable place 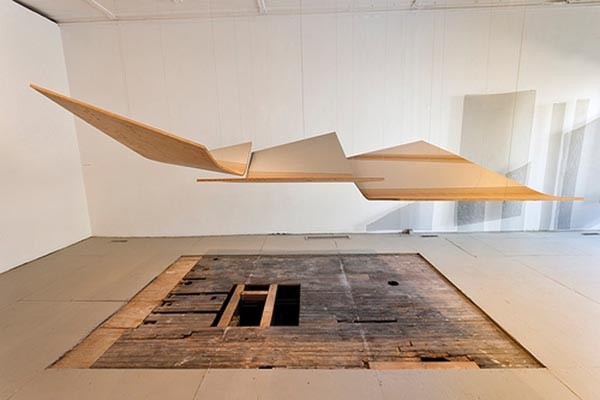 If walls could talk ... no doubt the ones at the Mattress Factory's Annex Gallery, at 1414 Monterey St., have something to say, as do the floors, stairs, doors and windows.  The house itself is not actually vocalizing; instead it has been animated by an exhibition of site-specific installations. Gestures: Intimate Friction, the 16th in the museum's Gestures series, uses the architectural aspects of the building itself as inspiration. Interested in the way "physical reality bumps up against us and then disappears from view," the curator of the exhibition, Mary-Lou Arscott, explains that the interventions created by the artists, architects and activists in the show, open up the building.

In traditional white-cube exhibition spaces, the walls, ceilings and floors function merely as a backdrop for contemplating art. But here the architecture is essential to the art. An awareness of the physical space is the point. And since humans tend to anthropomorphize inanimate objects, the exhibition transforms this particular house into a more personable, intimate and vulnerable place.

The first indication that something seems different about the building is that there are a number of bright-red downspouts jutting from the brick façade. They are too plentiful to appear functional and clearly not practical, as many of them do not even reach the ground. The passerby slowly realizes that these square pipes enter the house at odd angles through windows. More like periscopes, these tubes can be peered into or listened to so that the person outside can experience some of what is happening inside. The piece, by Dee Briggs, subverts the usual boundary between internal and external. Other pieces in the exhibition function similarly; however, to experience them one needs to step inside.

On either side of the first-floor entrance is Spike Wolff's "Shadow." This piece takes advantage of the light coming through the large storefront windows that lands on the inside walls and floor. Other works in the show also use windows as transitional spaces.  "Inside, Outside, Inside: walls are built," by the creative collective Transformazium, occupies one of the rooms on the second floor. Using repurposed materials to create a contemplative space — with a hammock, books, and vines growing up and over the open windowsill — the piece considers our myriad relationships with the buildings we build, destroy and inhabit.

Pablo Garcia uses a window on the third floor for his piece "Windows." When viewed from the doorway, the windows appear to line up. But in reality, one is a doppelganger, a mirror image painted onto a perpendicular wall. When the viewer moves further into the room, the optical trick is revealed.

Windows both reveal and conceal, as do doors. Whether open or closed, they are often sites of voyeuristic curiosity. Works by Jenn Gooch, called "Home Splice," explore moments of privacy in the home. Using video and audio, Gooch's pieces occupy spaces such as bathrooms, stairwells and storage spaces that the viewer can peek into. While Gooch's work focuses on intimate moments of human activity, several works explore the vulnerability of the home itself.

By flaying off a top layer, Jeremy Ficca's "3X4608" literally exposes what is normally hidden beneath the floor. Meanwhile, Nick Durrant's "Scratcher" and "Incident" are small robotic devices that tune into actions taking place on and underneath the stairs.  Taking a page from Gordon Matta-Clark, Nina Marie Barbuto's "Glory Holes" expose the joists, wood and brick behind the drywall. Matt Huber also cuts into drywall so that viewers can peer through a grid of rough windows into a room that has neither entrance nor exit. Other pieces speak less to the physicality of the building and more to its spirit. Gill Wildman's "House says" is made up of phrases spread throughout the house, such as "sit here wait a while" and "they slept here all of them."

Less directly related to this particular structure are Nick Liadis' aural installation called "Space of Sound/Sound of Space" and Ling He's "Wish exchange dandelion." The latter is an interactive installation that fills a room with helium-filled balloons beribboned with wishes placed there by visitors.

Looking a bit deflated, the balloons, most of which had sunk to the floor, seemed an apt metaphor for a show that could have been more dynamic but ultimately was a bit too subtle. Using an unconventional space, like a house or a factory, as an art gallery can be a great way to explore the intersections between art and architecture. But in this case, the work is so understated as to render the building mute.