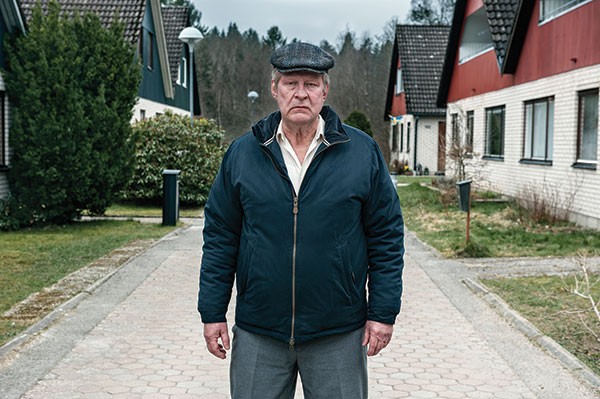 Ove (Rolf Lassgård) on patrol in his street

If you’re looking for something to take your mind off the non-stop vitriol and negativity that is Election 2016, you might find some uplift in Hannes Holm’s Swedish dramedy A Man Called Ove.

Ove (Rolf Lassgård) is a retired 59-year-old widower who spends his day in a rigid routine. He checks the signs and garage locks in his housing development. Yells at his neighbors for minor infractions. Visits the grave of his recently deceased wife, Sonja. Rails against the assorted bureaucrats who ruin everything. Ove is just generally content to be generally miserable.

Or not. He plans to “join” his dead wife, but no viewer will be surprised to find his suicide attempt thwarted by a doorbell he’s obliged to answer. Turns out he has new neighbors, a family headed by an Iranian immigrant, Parvaneh (Bahar Pars), who could both use some help and be helpful.

A Man Called Ove offers the familiar set-up, execution (here come some cute kids!) and feel-good resolution of many similar works about cranky people who need to lighten up. Yet none of the film’s expected beats should detract from one’s enjoyment.

The film is grounded by a stellar performance from Rolf Lassgård as the older Ove, who represents a traditional, sturdy, non-nonsense, orderly Nordic type, given to neither messiness nor exhibitions of joy. He’s at odds with contemporary Sweden, with its immigrants, gays and people who greet life’s irritants with a cheerful shrug.

But to fill in Ove’s current disconnect, the film flashes back to his past, rolling out scenes to illustrate how Ove became who he is. We learn that social interaction was always difficult for Ove, a trait he likely inherited from his taciturn dad, who found tinkering with his Saab the easiest way to impart life lessons. (The Saab is also a set-up for a comic riff later in the film.)

And hands down, the best thing that ever happened to the younger Ove (Filip Berg) was meeting Sonja (Ida Engvoll), the bubbly schoolteacher who sees Ove’s good spirit and emotionally vulnerability despite his bumbling and often off-putting ways. We only need to see Sonja interact with Ove once to know how devastating her absence in his life must be. (“It’s just chaos when you are not here,” he tells her headstone.) Thus, the character of Ove grows increasingly sympathetic as the film runs through Ove and Sonja’s life together, their union by turns sweetly romantic and heartbreaking. But fear not: This sentimental crowd-pleaser should leave you with a smile.