The show is unified by a sense of humor that connects directly to Bach’s own sublimated sense of irony, tragedy and comedy. 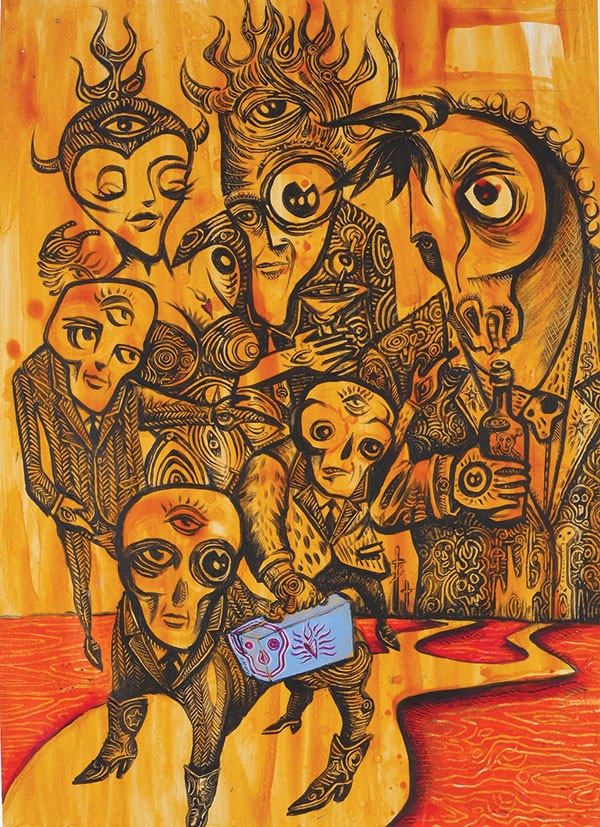 YOU ONLY LIVE TWICE

I first saw Rick Bach’s work as a college student sitting on a Mad Mex barstool in Oakland. During the long journey to the bottom of an oversized margarita, I noticed bug-eyed faces leering from the paintings on the wall — part Día de los Muertos and part surrealist comic strip. I remember thinking that the art was at once lighthearted and, well, mildly disturbed. Like an adult cartoon.

Bach, formerly based in Pittsburgh, now lives in Washington, D.C. You Only Live Twice, at Percolate Art Space, is his first solo show here in nine years, and his work still makes me feel like I’m guiltily laughing at someone’s self-deprecating joke. The show includes new pieces and reworked older ones, in sculpture, sketch and paint — more than 130 works, many made at a frenetic pace in the past few months. And indeed there is a definite cartoonish inspiration to some pieces, like his huge sculpture “Mr. Sphinxy,” which was born of a giant piece of metal that Bach started sculpting back in 2008. It sits atop of a tailor-made go-kart, retrofitted for the sculpture’s massive head. “Whatever I feel like doing is what I’m supposed to be doing,” he said in an interview.

Other pieces are noticeably darker, albeit still playful. “ChoosyChoicey” is a painting depicting a group of men with hooves for hands and skulls for heads dressed in herringbone-patterned suits. They huddle together on the white of the canvas nervously watching a meaningless pink dot in the corner. In “Not For Sale,” similar creatures watch voyeuristically as one of their own sits trapped inside a bottle. No doubt, Washington, D.C., has had its influence on Bach. Asked about living there, he says, “There’s a lot of the ‘same circus, different clowns’ mentality.”

The exhibit is best explored room-to-room, as groups of unrelated works, rather than as one big thematic show. (The title is more about the passing of influential artist Ellsworth Kelly than it is about Bach’s own work.) Regardless, the whole show possesses a sense of humor that connects directly to Bach’s own sublimated sense of irony, tragedy and comedy. It’s a bit as if Gary Larson and Luis Buñuel met at a bar. And then over a couple of margaritas decided to collaborate. But with Buñuel insisting on not using any captions.