From documentary work to new twists on pop culture, the scene is really expanding 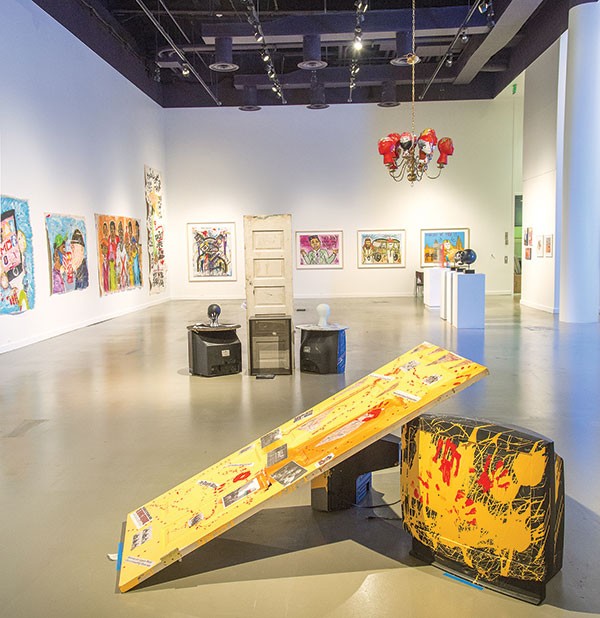 View of The Other Side of Pop, at the August Wilson Center

It’s a time of cultural plenitude — multiplexes of movies, binge-able television, ziggurats of books, crashing waves of music. It’s now pretty much impossible to be a completist in any field unless one has a narrow focus. But that also means that there’s plenty of whatever you’re looking for in quantity as well as variety.

Along those lines, the local art scene has in many ways matured and expanded, with new institutions icing the cake of established favorites which, like obsolete laws and ancient grudges, never seem to go away. Nor do I want them to! With an effort, one can still see most of what’s on display, but it takes increased persistence and planning.

Art-wise, there’s a wealth of the attractive, the slack, the finely crafted, the expressive, the quirky and the just-plain-weird-maybe-trying-a-little-too-hard. Bring it all on. And on top of all that, I’ve noticed an increase in projects that do more than decorate or delight or depict or annoy — i.e., fresh, ambitious projects that focus on persistent, unresolved issues or grapple with the new challenges coming at our collective head like so many fastballs.

“The Living Need Light, The Dead Need Music” (The Propeller Group, Forum Gallery, Carnegie Museum of Art, Oct. 23-April 25). Conjoining passages of clear narrative cinematic realism with artful fabrication and evocative symbolism, this video is exotic without demeaning its primary subject, namely, Vietnamese funerary customs and the attitudes underpinning them. Flawlessly produced by the Los Angeles-Ho Chi Minh City (formerly, Saigon) collective, it’s enlightening without being tendentious and overflows with visual and dramatic pleasure, and some discomfort-making, too. Ultimately, it eluded my grasp much as my space limitation here precludes my ability to describe its multitudinous contents. I learned something without quite understanding it, and if I’m not mistaken, that’s intentional.

The Other Side of Pop (August Wilson Center, Jan. 22-March 25). Sean Beauford’s curatorial concept was less than clearly stated but — what counts — the exhibit cohered around the theme of popular culture as seen in the work of young artists influenced by hip hop, with the exhibit often foregrounding its African-American roots. The show featured artists from Pittsburgh and points beyond whose work bears some affinity with officially sanctioned Pop Art but which speaks in their own individual voices. It was an immersion in youth culture with emojis, cartoons and logos celebrated as icons, but also often employed to raise topics such as racism and the tragedy of Bill Cosby. It’s good to have you back, AWC.

In the Air (Filmmakers Galleries, Sept. 17-Feb. 28). Following in the footsteps of 2013’s Marcellus Shale Documentary Project at Filmmakers, this exhibit tracked the presence and toll of air pollution on numerous levels, making visible the sometimes unseen threat and presenting concise and often quite affecting information and insight. Four local treasures with beyond-local reputations — Annie O’Neill, Brian Cohen, Lynn Johnson and Brian Goldsmith — each presented a very different take on air pollution in our region, which admittedly isn’t as bad as it used to be but remains a persistent problem that continues to cost people their health and their lives. Photography’s descriptive potential was a natural for this issue while some of the more artful and unexpected twists added depth and feeling.

While there are lots of worthwhile arts and education programs, it can be hard to strike a balance between making art and looking/learning/thinking, a.k.a. art appreciation. Neu Kirche Contemporary Art Center has found a sweet spot or two with its Fallow Grounds for Sculpture and Neu City initiatives, which combine urban farming and engaged public art, with both projects sited in vacant lots around Neu Kirche’s Deutschtown neighborhood. Artists selected from an open call are tapped to make or perform something and receive an honorarium to boot, along with the explicit requirement that the project must actively involve the community. Neu Kirche has now embarked on its second round of spring and summer projects in which the audience assists and/or affects the outcome, crowdsourcing at a meaningful level.

Given the fact that women do not have parity in either the art world or the wiki world — not to mention elsewhere — there’s work to be done. One aspect of that effort was the recent Art+Feminism Wikipedia Edit-a-Thon. Thons, actually, with one at Carnegie Mellon University and one at the University of Pittsburgh along with many other cities. Since I, like so many people, habitually turn to Wikipedia for initial research, this is an aptly targeted effort that considers how we live now.