A look at Pittsburgh’s comedy-podcast scene 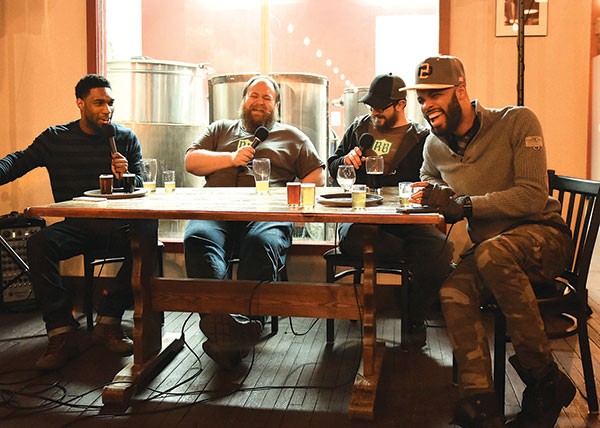 In the past year, comedy podcasts have grown significantly in popularity, both nationally and worldwide. WTF With Marc Maron and Chris Hardwick’s The Nerdist are two that many recognize. Pittsburgh is no exception. For instance, on top of full-time jobs, standup comics Ed Bailey, Day Bracey and Aaron Kleiber host, respectively, the podcasts Drinking Partners and Grown Dad Business.

Bailey and Bracey’s craft-beer-themed Drinking Partners highlights local personalities and businesses. The two hosts met through standup four years ago, and as their friendly competition and mutual respect grew through their interactions at open mics, they noticed that people were drawn to them, to their off-the-cuff banter. They often found themselves the center of attention at the bars hosting open mics, even when they were offstage. One night, as they were drinking on Bracey’s porch in Beaver, they decided to try podcasting. They knew they would need at least a loose structure for the show, a foundation to anchor the back-and-forth they’re known for. Craft beer became that foundation.

Each episode runs about an hour. As Bailey, Bracey and guest(s) drink beer, everyone loosens up and the energy level steadily rises. As the hosts see it, the beauty of the podcast is that they get to be themselves, in a way that differs from the very purposeful personas they present as standup comics on stage. “Day pushes the limit, he thinks he can go there, but ‘there’ becomes elsewhere,” Bailey says. By contrast, Bracey describes Dailey as the one who “keeps interviews on track and asks the hard-hitting questions.” Since it first aired in September 2014, Drinking Partners has released 63 episodes, including interviews with mayors Bill Peduto (an episode with 8,000 downloads) and John Fetterman, and shows recorded live at Hop Farm Brewing Company and Maggie’s Farm Rum. Based on statistics provided by iTunes and Libsyn, 88 percent of their listeners are in the U.S., and the majority of U.S. listeners reside in Pittsburgh, Washington, D.C. and California. Drinking Partners has been featured on iTunes’ New and Noteworthy chart.

Kleiber’s Grown Dad Business is a “lighthearted but serious-minded podcast” with roots in the theme of family. Kleiber, a husband and father of three, interviews creative people from around the country about their childhoods and how they got to where they are now, inviting stories about parents, siblings, spouses and kids. Kleiber says the podcast was inspired by a comment from fellow comedian Doug Benson, back when Kleiber was doing a podcast on movies. Benson asked why Kleiber wasn’t doing a podcast that related to his standup material about being a husband and dad — one that his standup fans would listen to.

“I love that it’s something that no one else is doing — every comedy podcast seems to be, ‘So, tell me how you got your start in comedy,’” says Kleiber. “It’s nice to have a niche.” Most comics who host podcasts interview comedians about their careers, and the ones that are more distinctly themed often discuss movies and show business. Kleiber’s family-centered approach sets him apart.

On average, an episode runs half an hour. The opening credits feature Kleiber’s son and daughter, laughing and saying words like “underpants” as they introduce their father. Kleiber seizes opportunities to record his podcasts as they present themselves, whether this be in his Munhall “dad cave,” his car, a hotel balcony or a comedy-club green room. Occasionally, his son answers listeners’ questions but, as Kleiber quickly discovered, it’s hard to get a 5-year-old in front of a mic to stay on track. The first episode aired this past July, and the series now has 29 episodes, including interviews with Bobcat Goldthwait, Paul Rodriguez and Todd Glass. Kleiber often records episodes as he’s on the road doing comedy, inviting the people he works with to be guests. Grown Dad Business has also been listed on iTunes’ New and Noteworthy chart and continues to gain new listeners from Pittsburgh, D.C., California, New York and beyond.

Both Drinking Partners and Grown Dad Business are produced by Epicast, a local company run by Buzzy Torek and Nick Miller. When discussing their podcasts, Bailey, Bracey and Kleiber all emphasize the support and professionalism they receive from the two producers, whom they see as “paving the way for Pittsburgh podcasts.”

Some other podcasts hosted by Pittsburgh comics include Ian Insect Is Evil; Kleiber and Sean Collier’s You Can’t Handle the Truth; Jim Krenn: No Restrictions; and Garrett Titlebaum’s The Art of the Covenant.