A local author's new book explores the world of squatting

Hannah Dobbz's Nine-Tenths of the Law surveys the history of "property and resistance in the United States." 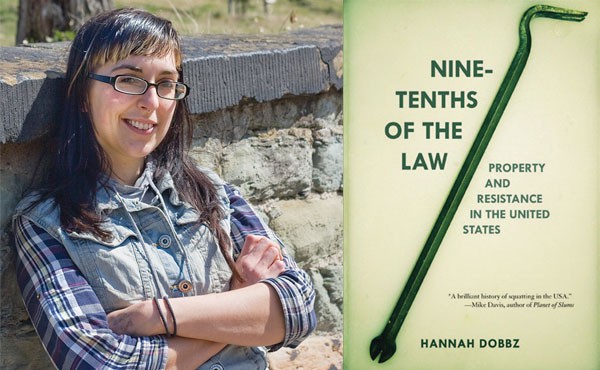 Hannah Dobbz, author of Nine-Tenths of the Law

You might assume it's illegal to live in someone else's abandoned property without permission. But things aren't always that clear-cut in the world of squatting as explored by Hannah Dobbz in her engaging and provocative new book, Nine-Tenths of the Law: Property and Resistance in the United States (AK Press).

"Property," in the contemporary American mind, is sort of sacredly ossified, with legal title-holders assumed to have near-absolute rights to use it — or not — as they wish. But in Dobbz's historical panorama, from rural rent strikes to contemporary urban squats, the U.S. has been home to very different conceptions of the land. The local author is a former squatter who sees squatting as everything from a form of resistance to capitalist culture to "a pragmatic alternative to the housing crisis."

Given that Native Americans in colonial and frontier times had no notion of personal property, let alone "title," the U.S. was largely built on squatting. Europeans erroneously called the land wilderness and claimed it by right of "civilization." But as Dobbz writes, there was a twist: Land that colonists and, later, the U.S. government traded for or seized was assumed to have a market value. In other words, even during the government's long history of awarding land to illegal settlers, that land's "use value" as farm, ranch or timberland didn't sufficiently account for its price.

U.S. law gives primacy to market value, and that results in speculation and hoarding of land and buildings, even ones long abandoned. Highlights of Nine-Tenths of the Law include Dobbz's account of an anti-rent movement in mid-1800s upstate New York, where for 26 years a sometimes-violent popular uprising fought a feudal arrangement under which a single wealthy family held vast tracts of land in perpetuity. Although that particular landholding practice had been outlawed in England centuries earlier, the law and its armed deputies backed the property owners.

Squatters' associations that promoted squatter rights at the state and federal level persisted into the 20th century. And the issues remain. To discuss challenges facing contemporary squatters, Dobbz draws on her own experience squatting in an abandoned Oakland, Calif., warehouse several years ago. (The experience inspired her fine 2007 short film "Shelter: A Squatumentary," which in turn sparked Nine-Tenths of the Law.)

In the wake of the 2009 mortgage meltdown, about 10 percent of this country's 132.5 million housing units are vacant year-round, according to U.S. Census figures. The housing market is driven by what Dobbz calls "the myth of scarcity." But in reality, she says, "There are more buildings and resources than can be utilized."

Dobbz juxtaposes these "peopleless homes" with homeless people. "If certain [property owners] ... are monopolizing these resources or hoarding them, you're squandering those resources," she says. "It's a distribution problem."

There are laws against breaking and entering. But once you're in — and not all squatters need break in — possession, or nine-tenths of the law, is in your favor. Moreover, right of occupancy is a civil matter, not a criminal one (though police might try to charge you with trespass, for instance). Theoretically, squatters can even attain "adverse possession" of a property by simply occupying it. Meanwhile, the U.S. lacks any laws that address squatting per se. (European countries, traditionally more amenable to squatting, have seen a backlash, with the practice recently criminalized in Great Britain and Amsterdam.)

U.S. squatters occupy a legal gray area. Those who improve their properties, get along with their neighbors and don't face objections from title-holders might make out just fine. (This was Dobbz's experience as a squatter.) Others might encounter police harassment or eviction.

Dobbz, 28, is a native of Western Massachusetts who now lives in Lawrenceville. The former staffer at Pittsburgh's Big Idea Cooperative Bookstore & Café has a wry sense of humor. At her interview with CP, she wore a necklace with a padlock and skeleton key. But her message is in earnest: Her book's appendices include practical information on property law and researching titles. (Also see her blog at www.propertyandresistance.wordpress.com.)

And the message is getting out there. So far, Dobbz's speaking tour for the book has hit bookstores, universities, community centers and chapters of the activist National Lawyers Guild in cities including New York City, Philadelphia and Boston. After an upcoming Pittsburgh date, more talks are scheduled in towns from New Orleans and Chicago to Austin, Texas, and Los Angeles.

Squatting, Dobbz emphasizes, is seldom an end in itself. It's a means to an end. Some squatters want permanent, sustainable, affordable housing for themselves or others, including the homeless; others squat to draw attention to issues of housing justice. To her, squatting is just one aspect of a much larger issue. "It's about housing and property, and that affects all of us," she says.