A local activist at the Dakota Access pipeline, plus a new documentary on West Virginia and coal | Green Light | Pittsburgh | Pittsburgh City Paper

A local activist at the Dakota Access pipeline, plus a new documentary on West Virginia and coal

“I believe that you put your body on the line for things that you believe in.” 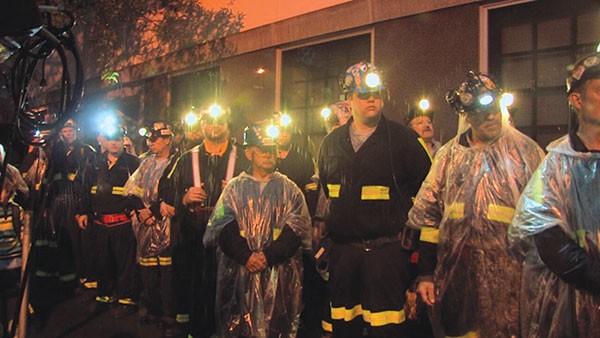 The Dakota Access pipeline might seem far away. But Vanessa German knows it’s only two days’ drive. And if you’re concerned about issues like fracking, water quality and climate change, it’s closer still.

German, the nationally known, Pittsburgh-based artist, recently spent nine days in the activist camp near where Energy Transfer Partners is building the $3.8 billion, 1,172-mile pipeline, meant to carry 500,000 barrels of fracked crude oil daily from North Dakota’s Bakken Shale fields to ports in Illinois. The route traverses traditional lands of the Standing Rock Sioux tribe, and along with fearing threats to water quality, the tribe says that the pipeline damages sacred burial grounds. Not to mention that its cargo would constitute yet another carbon bomb for earth’s atmosphere.

In April, calling themselves “water protectors,” members of dozens of tribes founded Camp Sacred Stone. In August, German saw video of activists — including two young African-American men — getting arrested trying to halt pipeline construction. “I believe in that,” she says. “I believe that you put your body on the line for things that you believe in.”

At the camp, which during her stay grew to 1,000 people from 100 or more tribes, German was awed by the beauty of the Great Plains, moved by the welcome she received from Native Americans … and shocked by the police drones buzzing over the camp. She brought supplies for doing art projects with children, and helped in the kitchen; she knew activists who, during clashes with pipeline security personnel, were injured by dogs and pepper spray. German was there on Sept. 9, when the Obama administration called for a voluntary halt to construction near Lake Oahe (the reservoir that supplies much of the Standing Rock Sioux’s water) and said it would review the entire project, and even the way the government interacts with tribes on big projects like this one. It was a big victory for the tribe. (Last week, a federal court issued an injunction on pipeline work near Lake Oahe, making the halt mandatory, if short-term.)

German says she is deeply moved by the tribes’ commitment to protecting their environment. “I didn’t know [people] lived so close to the earth … who recognized your hands and body as part of the earth,” she says.

Street protests against Dakota Access continued last week, in Pittsburgh, around the U.S. and even internationally. German, who left Camp Sacred Stone on Sept. 12, admires the water protectors’ resolve: The camp plans to remain.  “It’s not going anywhere,” she says.


In other fossil-fuel news, while its profile has shrunk in our energy portfolio, coal still generates one-third of U.S. electricity; mining it remains a dirty, dangerous business, as does burning it. Critics see reducing dependence on coal as bad for the economy, but a new documentary screening here argues that the same companies who are devastating the planet are also endangering miners and slashing jobs.

Blood on the Mountain, from the producers of acclaimed 2009 PBS series The Appalachians, looks at coal’s long history in West Virginia. It’s a story of company towns, violence against miners, and busted unions; flouted safety regs and deadly disasters; political corruption; poisoned water and strip-mined land; and communities left empty and impoverished when companies automate, or turn from underground mining to strip-mining. “The war is the one coal has waged on West Virginia for the last 150 years,” says Pittsburgh-based attorney Bruce Stanley, one of a list of interview subjects ranging from history experts to former miners.

The film will receive theatrical distribution this fall. “It’s really about labor. It’s really about corporate responsibility,” says co-director Mari-Lynn Evans, speaking by phone. Labor and environmentalists need to unite, she says: “We haven’t begun the discussion about how we move forward as workers.”