A homebrewer fulfills his dream at Eleventh Hour Brewing

“I brew what I like to drink — which is pretty much everything.” 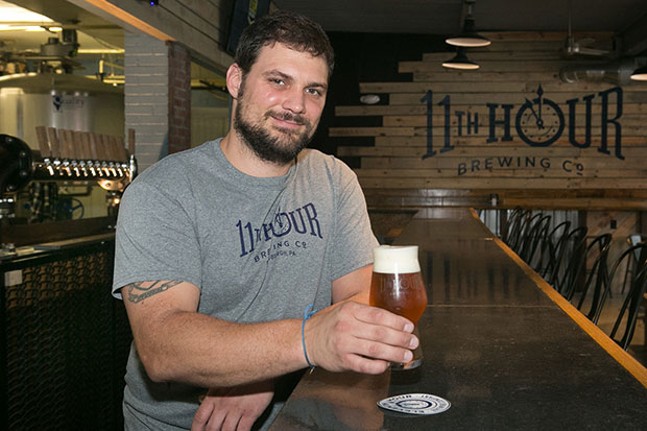 Since the day he was born, the number 11 has had an almost mystical significance for Matt McMahon. Starting with his birthday (Nov. 11), the number has followed him, from his baseball-jersey number as a kid to the fact that his wife’s birthday comes 11 days after his. Now, McMahon hopes the number continues to bring him luck with Eleventh Hour Brewing, the brewery and taproom he opened earlier this month.

As the name suggests, Eleventh Hour Brewing has been a long time coming. An avid homebrewer for more than a decade, McMahon, 37, began to plan the brewery back in 2013. After a number of challenges, including two locations that fell through at the last minute, Eleventh Hour found a home in a former schoolhouse in Lower Lawrenceville.

With the help of an array of family and friends, including wife Keana and stepson/assistant brewer Justin Strzelczyk Jr., McMahon transformed the historic building into the brewpub of his dreams. (Strzelczyk Jr. is the son of former Steeler Justin Strzelczyk, and Keana McMahon is Strzelczyk’s widow.) The bar faces the shiny new 20-barrel brewhouse, so guests can see where the magic happens. The space is filled with natural wood and an array of clocks (all set to 11), and garage doors let the breeze into the cozy taproom. But the real focus is the beer.

“I brew what I like to drink — which is pretty much everything,” explains McMahon. “My goal is to have something that everybody’s going to enjoy.” The brewery opened with a half-dozen beers on tap, a small selection ranging from a Belgian blond and an oatmeal stout to a pale ale hopped entirely with citrusy Equinox hops. McMahon dubs these initial brews the “Beta Series,” as he will continue to experiment and perfect the recipes. The lineup will eventually expand to fill all 12 taps (a traditional Oktoberfest beer is waiting in the fermenters). Arsenal Cider House cider, Apis mead and craft sodas are available for non-beer drinkers.

Expect more as Eleventh Hour settles into its spacious digs. Its products are already on tap at a handful of area bars and restaurants, and McMahon — who continues to work as a business consultant — plans to increase distribution as production ramps up. He also intends to replicate some favorite recipes from his homebrewing days, including a hoppy, juicy red ale and a Russian imperial stout aged in Wigle barrels.

For now, stop by the taproom Thursday through Sunday for tasters, pints, crowlers (32-ounce cans) and growlers. Though Eleventh Hour doesn’t serve food, it features a rotating lineup of food trucks parked out front. Ultimately, Eleventh Hour aims to serve approachable brews in a friendly, neighborhood taproom. And for Matt McMahon, the brewery finally realizes a long-time dream. As McMahon says, “This is something I wanted to do before the eleventh hour of my life.”

New and upcoming Pittsburgh craft breweries sure to wet your whistle