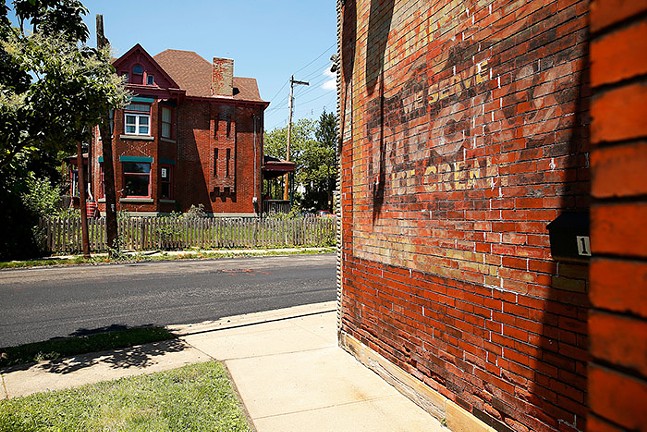 CP Photo: Jared Wickerham
Rieck’s Ice Cream ghost sign in Wilkinsburg
Ghosts linger everywhere in the city. Hidden on the sides of brick buildings and peeking over the tops of roofs, signs from decades and centuries past are scattered throughout Pittsburgh. As new development continues, ghost signs are disappearing, but the ones that remain paint a picture of an older Steel City, and allow onlookers to imagine those who stood in the same places years before.

“It's almost like a keepsake,” says Kelly Bogel Stokes, who photographed about 80 ghost signs around the city for the project Palimpsests: Ghost Signs of Pittsburgh in 2014. “It's kind of fun to preserve that before they're gone. Because I feel like they'll keep disappearing or the walls of a building might be torn down or something might be built next to them ... or they'll be, you know, gone.”

For those who want to see these momentos from Pittsburgh’s past, here are five to catch before they’re gone:

Association for the Improvement of the Poor

Looming over Wholey’s Fish Market in the Strip District, the faded white triangle represents the Pittsburgh Association for the Improvement of the Poor. Formed in 1875 in response to the Panic of 1873 and the resulting financial depression, the association helped Pittsburghers with food, money, clothing, and fuel. By 1912, it had expanded to support children through the Children's Temporary Home and Day Nursery, and its industrial plant employed homeless and unemployed men. Its legacy lives on through Family Resources, which was created when the association merged with the Child Abuse Prevention Center in 1986. Family Resources is now based Uptown, focusing on child abuse prevention and intervention.

This colorful ghost sign is hidden around the side of a building in Wilkinsburg. It advertises Rieck’s Ice Cream, which carries a history of entrepreneurship, company mergers, and labor violations. Edward Rieck began a milk delivery company in 1886, and by 1898, he was in the ice cream business. In 1923, Rieck merged with Hydrox, another ice cream business, and formed National Dairy Products, or as we now know it, the food giant Kraft (which has actually since merged with Pittsburgh-based Heinz). The Sealtest brand of ice cream for National Dairy was created in 1935, and a decade later, The Pittsburgh Press would recognize it as “Pittsburgh’s standard of Quality!” 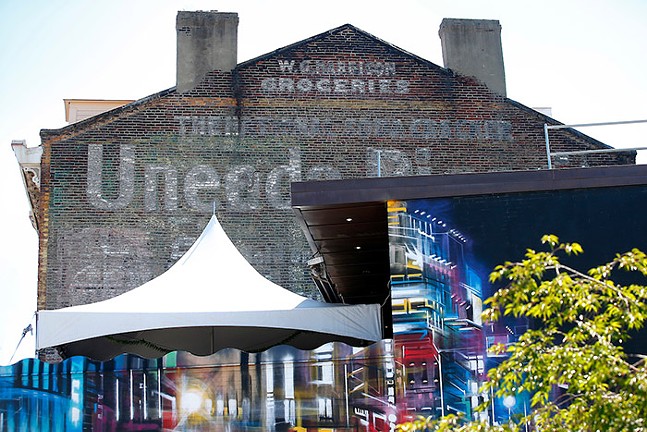 The flaking green and white paint advertising 5¢ Uneeda Biscuits is juxtaposed with the vibrant mural of an urban streetscape at night on the side of New Amsterdam bar in Lawrenceville. The temporal and aesthetic dissonance offers a chance to appreciate Pittsburgh’s past and present all at once. While the National Baking Company, or Nabisco, was not a local company, it had a factory in East Liberty. The factory closed in 1998 and is now Bakery Square, and Uneeda Biscuits were discontinued in 2009, but the memories of the scent of baked goods wafting through the surrounding neighborhoods remain for many Pittsburghers.

While the sign claims E&O stands for “early & often,” E&O Beer refers to the Eberhardt and Ober Brewery, which opened in 1848, before Allegheny City was annexed by the city of Pittsburgh. Two German brothers-in-law settled in Deutschtown and formed the brewing company in 1870, and in 1883, they purchased Straub Brewery. The main office and administrative building of the original brewery complex still remains today and is listed on the National Register of Historic Sites. Penn Brewery and the Pennsylvania Brewing Company, which began in 1986, is located on the site of E&O’s brewery, and they still use the original lagering caves. While the brewery is a couple streets over at 800 Vinial St., it’s not a far walk to take in the restored E&O sign and the Pittsburgh history it represents. 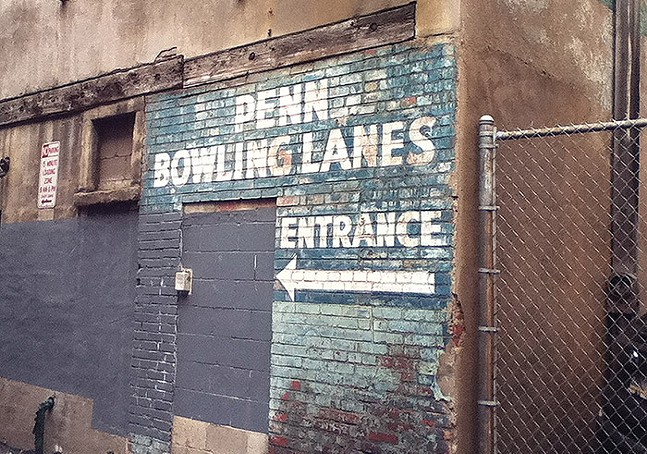 Little information remains on the record about Penn Bowling Lanes, but perhaps that’s fitting for a ghost sign tucked away in a narrow alley between Penn and Liberty Avenues in Downtown. According to a December 1967 article in the Pittsburgh Post-Gazette, Robert Hendel was the owner of Penn Bowling Lanes for 25 years. By 1981, the same address was listed as the Loose Balloon, one of many gay bars in Downtown, although an account in “A Social Member in Good Standing: Pittsburgh’s Gay After-Hours Social Clubs, 1960-1990” shows that the Loose Balloon may have been around in the late 1970s. The address currently belongs to Sienna Mercato, an Italian eatery with a rooftop beer garden and pizzeria. Today, the closest bowling alley to Downtown is Arsenal Bowling Lanes, three miles away in Lawrenceville, which recently announced it’s up for sale.

Pittsburgh's People of the Year 2021: Politics

Pittsburgh's People of the Year 2021: Health

Pittsburgh's People of the Year 2021: Literature