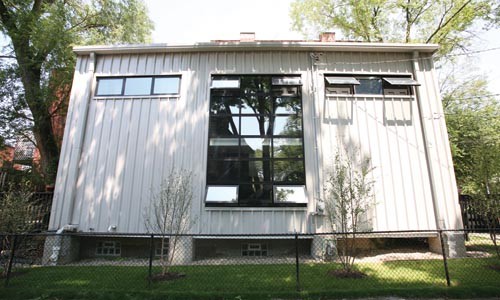 Outside the box: Jeff Walz's Howe Street house, in Shadyside.

OK, maybe the comparison strains credulity, not least because San Francisco's new De Young Museum is a masterwork by architects Herzog & de Meuron, whose work we couldn't even get here in exhibition form. (A scheduled show at the Carnegie a few years ago was canceled, not that I'm bitter.) Recently, though, between the universities and the high-tech companies, there is a cross-fertilization between the Bay and the 'Burgh that leads to exciting architecture here, not just there. Jeff Walz's Howe Street house is a promising indication that a design dialogue between the two cities need not be one-sided.

A self-described East Coast native, Walz has bounced between Pittsburgh and San Francisco in jobs with Intel, Carnegie Mellon and Google. For his Pittsburgh stint, which began in 2002, he aimed to move into a quaint, wood-framed Victorian in Shadyside. Sadly for the house, 15 years of abandonment had resulted in extensive rot and mold that made a tear-down seem more practical than a restoration. What to build, then?

"I wanted to do something that was not really expensive," says Walz, underscoring one Pittsburgh advantage. "Something that was modern and open inside." By hanging out in the coffeeshops of Shadyside, he befriended architect Harry Levine, and the two started thinking outside the box -- and inside it as well. They decided to use a prefabricated metal building "as a basis to build this really cool, custom modern home thing," Walz explains. "I wanted an urban loft with a yard and decks."

Levine's initial cocktail-napkin sketch led to selection of a pre-engineered building by Nucor and an exciting process. "It went from being a modest collage-type thing to a more powerful [design]," Levine recounts, referring to the large-scale symmetrical and revealing windows. On the interior, "things that were generic and plain started getting revved up." The house, though austere in many ways, has radiant heating, a stainless-steel kitchen and designed "artisan" handrails, significant upgrades from the bargain approach of the initial schemes.

The result is open and airy. The upstairs bedrooms and study are connected by a catwalk that leaves a two-story living and dining area below, with a garage-type door that opens from the kitchen to the outdoors. Levine gets "a big feeling, a big emotion from the space. It's not unlike a chapel or a gallery."

In fact, Walz had planned to use the residence for art openings and salon-style parties, until he was lured back to the West Coast to work for Google. He left town just as the house was nearing completion. As luck would have it, Walz's Bay Area friend and colleague Scott Summit was on his way to Pittsburgh for a one-year stint of teaching and practicing industrial design. He moved right in. "It couldn't have been more perfect for what I'm doing," says Summit. His drawings and models filled the space by day, and friends and colleagues came by at night, showing the house's suitability to both studio work and dinner-party socializing. The design "really connects with the artistic and entrepreneurial crowd," he observes.

Not everyone in the traditional neighborhood is such a fan. Levine says that one old lady asked, "Are you responsible for that godless thing?" Then again, he notes, "Anyone under 50 generally likes it."

Even better, the house is gaining popularity in San Francisco, with a broader audience to follow. Deborah Bishop, a contributing editor for San Francisco-based Dwell magazine and a friend of both Walz and Summit, recently visited the house and will publish an article on it in the October issue. Pittsburgh is not especially renowned as a mecca for progressive residential design. Apparently though, Northern Californians may be more ready for a hip, modern steel city than we are.

Meanwhile, Walz contemplates his work for Google, which involves considerable travel, and declares, "I'm hoping to spend more time there." Because of the new house, he means Pittsburgh, not San Francisco.