A Hell of a Flight 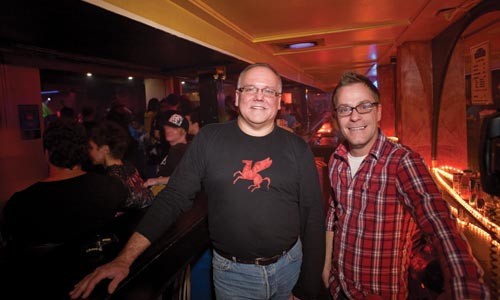 As Pegasus owner Scott Noxon prepares to close this Downtown landmark gay bar on Dec. 6, his fondest memories still seem to be from the time he was just a customer. In 1984, Noxon came out -- in both senses -- for the first time to Pegasus, just four years after it opened.

After work, he recalls, you could see political figures "and the heads of the largest corporations in suits meeting here.

"Nobody discussed who they saw here," he adds, sitting in a back office whose walls are still covered with signed souvenirs from American Idol contestants, adult-film stars, drag performers and Gov. Ed Rendell. "It's always been known as a safe place."

The entrance to the Liberty Avenue bar, marked only by a red Pegasus figure, leads down a set of steep stairs. But once you reach the bottom, the entire bar is visible: the alcohol-free section on the right, for the club's college-age patrons; the dance floor in the middle; and the main bar on the left, marked by a large crescent-moon statue with puckered red lips.

Expenses are "too high here, especially for a basement," Noxon says in explaining the bar's demise. Five years ago, he bought it from original owner David Morrow, who died earlier this year. Noxon also owns the North Side's Eagle, another fixture in the lesbian, gay, bisexual and transgender (LGBT) community here. The Eagle was closed temporarily over the summer.

"It was always a cause," he says of Pegasus's spot in local gay history. "But from what I see, we don't need it any more. We asked for acceptance. We got it." Numerous other bars and clubs in town welcome a gay clientele, he points out, and "The Internet has taken a bunch of our customers" as well. Still, the decision to close "was tough -- Rodney and I shed some tears over it."

Manager Rodney DeCecchis, the bar's longest employee at 15 years, isn't so sure places like Pegasus have become obsolete. "It's been a great place for youth" to come out and to meet other LGBT people, he says. "Seeing this place, hearing about it, has helped a lot of people," he adds.

"It was my first gay bar, from when I came out -- 1993," says Shawn Collins, who has been a DJ here since 2001. "When people from out of town think of a gay bar in Pittsburgh, they all know Pegasus. It's always everybody's first bar."

Pegasus has also been the first choice of local nonprofits trying to reach young LGBT people to promote a cause.

"Every new organization that would spring up would come to the bars and say, 'Would you donate to this? Would you donate to that?'" says Jim Fischerkeller, who began volunteering with Downtown's Gay and Lesbian Community Center in the 1970s, when it was just a phone line in someone's home, and was its chairperson from 2000 through 2005. "In the early days, I felt that the bar owners made a lot of money off of our community, and I thought they ought to give back. They certainly did." Pegasus in particular, he says, "had many shows [that] were fundraisers for different gay and lesbian organizations."

Most crucially, the Pitt Men's Study began its investigation into the causes and effects of AIDS in 1984 by recruiting male subjects from local gay bars, including Pegasus.

"Along with the other bars, it was a key player in getting AIDS research going in the city," says Anthony Silvestre, who was hired that year to head the recruitment effort and is today co-investigator of the study. "Maybe more important, it had a key role in education" about AIDS here before local officials got involved, he adds. "It was also at Pegasus that the first organizing committee was formed for the Pittsburgh AIDS Task Force" in 1985. He calls it the movement's "Independence Hall."

Today, Lyndsey Sickler uses Pegasus to offer oral HIV testing, free condoms and safe-sex advice to 18- to 25-year-olds as part of the LGBT organization Persad's Youth Empowerment Project. She's been at the bar twice a month since 1997. "Pegasus has been a staple venue for outreach services," she says. Noxon and DeCecchis, as well as original owner Morrow, "have always been willing to help out nonprofits, and the drag community."

"Any time we lose a site where kids gather, it's a loss to the program," says Persad head Betty Hill.

Pegasus' closing is a loss to Pittsburgh too, says Pittsburgh Cultural Trust spokesperson Veronica Corpuz. "They were a great asset in the Cultural District," she says.

Noxon and DeCecchis didn't always feel entirely welcome, they say. The Trust bought their building in 2003, replacing the street-level Condom World and an adult bookstore with Space art gallery. They also made Pegasus remove its large red-and-black Pegasus sign, which had hung over the sidewalk for years.

"This has been tough to run a business without any way to advertise that you're here," adds Noxon. The Cultural Trust "said they wanted to sterilize -- I think they said sanitize -- the area" from its seamier days. (Corpuz says she doesn't know the history of the sign's removal.) Today, Space's smaller sign hangs from Pegasus's former signpost. "And [Space pays] no rent," Noxon says. "That was sort of a slap in the face to me."

Mostly, though, the good memories are all around them -- like the old sign, which now hangs in the bar.

"There's three giant Rubbermaid containers of shows and contests we had here, on VHS tapes," Noxon says. "It'd be awesome if we could find Christina Aguilera on one of them." Barroom legend has it that the pop star performed at Pegasus before her 1999 breakout album, though details are hard to substantiate.

Noxon plans to bring down the sign for The Staircase Lounge -- the place's name before Pegasus -- and display it inside during the bar's last week. He marvels at the gay celebrities who joined the crowd or performed here through the years, such as drag icon Divine, made famous in John Waters' movies.

"We had Rufus Wainwright here as a customer" after a 2008 concert, recalls DeCecchis. "It was fabulous."

"I don't think there'll be another bar like it," says doorman Terry Price, whose longevity at Pegasus rivals that of DeCecchis. "It always had a good cruising pattern" -- especially because the entire floorplan is visible the moment customers descend the stairs.

"It was like going to Hell," he says affectionately. "We were all having fun in Hell."