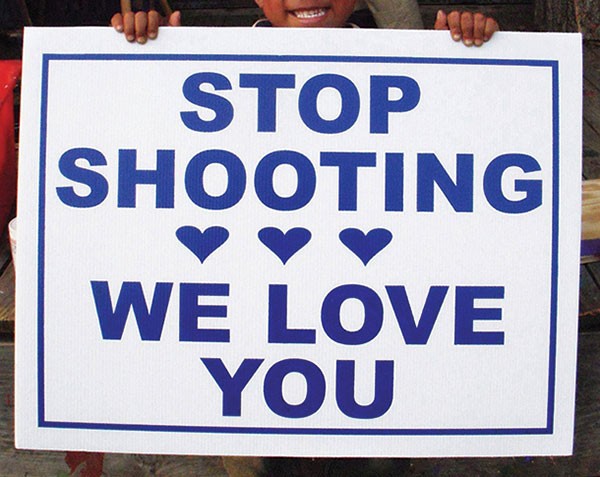 One of Vanessa German's "Stop Shooting We Love You" signs

In SPACE Gallery's exhibition Unloaded, 23 artists evaluate gun culture and our enduring crisis of gun violence. In the exhibition essays, curator Susanne Slavick writes, while the show "reflects a number of perspectives, ... none endorse the gun as a means to an end."

Still, sweeping through and counting more than 100 images of guns, a viewer finds that a majority of the work leverages the gun's visual power quite directly, with the artists reworking this cultural symbol (and its affiliated iconography of crosshairs, bullets, bullet holes) in varying media and sensibilities.

In "Cross for the Unforgiven," Mel Chin welded together eight AK-47s, resulting in an intimidating Maltese cross. By sealing their barrel tips in a perpendicular pattern, however, the artist removes the assault rifles' intended utility so that they instead function benevolently, as decoration. Dark thought I can't shake, given this model's notoriety in illicit trade: What would be the body count if they were not rendered impotent?

Gun-neutering is also possible by shrinking and covering firearms in fur or glitter, as in Don Porcella's bag of mini "GUNS," as written on the disproportionately large label in block handwriting. And well-placed near the men's room is Jim Duesing's dude-spoofing animation, "Dog," depicting a bouncy wiener in sunglasses, looped in animated infinity, twirling the revolver between its legs. High on machismo, he's content (toothy smile intact) "doing his thing" ad nauseum. Differently, Chin, Porcella and Duesing subtract gun's visual potency through disfiguration.

The photo snapshot "Destiny Fulfilled" shows artist Brander looking confident with, but dwarfed by, a rifle she's showing off. In her other hand is a practice target riddled with bullet holes. ("I'm a good shot," it tells us.) Immersed and participating in a gun enclave, Brander's persona imparts brash reflexive irony either as staged photography or as performance piece.

Syjuco appropriates the standard-issue Smith & Wesson image into a crochet design, then capitalizes on audience participation by sharing the instructions online. But when she's contacted by a gun enthusiast (an exchange captured in an email from a woman assuming similar kinship), roles, in a humorous twist, turn upside-down: Syjuco becomes an unintentional producer of gun-culture commodities, while the enthusiast, by materializing the subversive design, becomes an oblivious performer of Syjuco's critique.

And speaking of mix-ups, there are the Tumblr-based photography/video/performance projects of Dadpranks, a collective that trades in clever pictorial tropes combining consumer lifestyle junk with irresistible snark. Distilled is a punny feminist-aware goal regurgitating popular media. Their contribution here sniffs out the oddly marketed association between gun culture and hominess in a photo: a gun-shaped coffee mug from Cabela's (the outdoors megastore, known for gaudy taxidermied game displays and "Redneck Gift Ideas") with a steeping bag of Echinacea tea. Punchline in title: "Echinacea Plus Cold Defense."

"Unloaded" is also reasonably pensive, some artists forgoing innuendo for straightforward approaches. Conceptual artist Adrian Piper, with characteristic blue-chip gravity, has us gaze squarely into a framed target. Faintly beneath is the now-iconic portrait of the be-hoodied Trayvon Martin, the bull's-eye aligned between his eyes, red text reading: "Imagine what it's like to be me."

Finally, Vanessa German's creative vitality raises awareness on race and violence in her community-activism-as-art-approach with two projects: her "Stop Shooting We Love You" signs (now displayed throughout Pittsburgh) and the ARThouse, in Homewood, which turns her home into an art workshop for children. German's aim is wide and clear, while her impact is real, the proverbial boots on the ground.

Cogent essays that accompany this exhibition are mindfully goal-oriented toward gun-control; but these propositions, in their overall lecture-to-the-faculty decisiveness, might not go too far, especially when considering gun control's history of frustratingly ex post facto legislation. Unloaded works as a unified and diverse visual engagement of a disquieting piece of Americana, but leaves us with a bigger, although critical, picture of just how much power guns have.