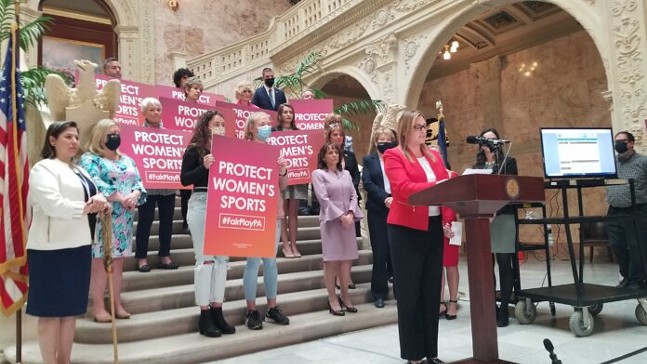 Exact language of the proposal is not yet available. But the legislation, sponsored primarily by Rep. Barbara Gleim (R-Cumberland), is titled the “Save Women’s Sports Act.”

It would “protect opportunities for women and girls in athletics by ensuring women are not forced to compete against biological males playing on women’s sports teams,” according to a memo sent to lawmakers on Feb. 5.

There is no evidence that transgender women outperform cisgendered women, or women whose gender identity matches their sex assigned at birth, in sports, according to a 2017 review of scientific literature.

One expert told Scientific American, a popular science magazine, last month that “studies of testosterone levels in athletes do not show any clear, consistent relationship between testosterone and athletic performance.”

The lawmakers only provided anecdotes during a Monday press conference unveiling the bill. They also cited a February 2021 study of military fitness assessments in the British Journal of Sports Medicine afterwards to support the proposal.

The study found that adult transgender women’s athletic abilities even out with ciswomen’s abilities about two years after starting hormone therapy.

The proposal has the backing of the Pennsylvania Family Institute, a social conservative state advocacy group. House Democrats meanwhile attacked it as a “sham bill” that attempted to “ignite culture war” in Harrisburg.

“This bill is a complete invasion of young people’s privacy in response to a non-existent issue. It’s also likely an unconstitutional violation of transgender people’s rights,” said state Rep. Jessica Benham (D-South Side), who is the first openly LGBTQ women to serve in the Pennsylvania General Assembly.

Their bill is modeled on an Idaho law according to the Idaho Capital Sun, a sibling site of the Capital-Star.

That law has been rendered unenforceable while a legal challenge to the law plays out in federal court. Transgender people’s civil rights were affirmed in a landmark, 6-3 U.S. Supreme Court decision last year.

Piggybacking off that ruling, President Joe Biden issued an executive order on his first day in office to affirm that it applied to schooling, and school sports.

Gleim said she has not been in contact with Alliance Defending Freedom, only a working group that includes former tennis star Martina Navratilova.

A spokesperson for the working group did not immediately answer questions about the proposal.

While the working group is separate from the Alliance Defending Freedom, Navratilova was also one of more than 300 signatories of an August 2020 letter to the National Collegiate Athletic Association opposing transgender women in college women’s sports, and backing Idaho’s law.

In a statement, the alliance did not confirm or deny it was advising lawmakers in Pennsylvania.

“As is typical practice for legal organizations, ADF is often asked by legislators to review possible legislation and offer advice,” the statement said.

Most national and international sports governance bodies have allowed athletes to compete in the sports with teammates and opponents who match their gender identity, with some restrictions.

Pennsylvania is one of nine states that does not have any state guidance on trans athletes competing in school sports, according to TransAthlete.com — a website run by Chris Mosier, America’s first transgender athlete to play on a national team.

Moiser told the Capital-Star in an email these bills have become more common in the last two years.

“Sport, for me, was a lifeline and a life-saver. As a young person, I felt, and still feel, the most connected to myself, to my peers, and to my body, when playing sports,” he said. “Transgender kids want the opportunity to play sports for the same reason other young people do: to be a part of a team where they feel like they belong.”

By-laws from the Pennsylvania Interscholastic Athletic Association, which governs high school sports in the commonwealth, states that “equal opportunity” should be given to all athletes, “without regard to race, color, religion, gender, age, national origin, or ethnic background.”

A 2014 policy on mixed gender participation, meanwhile, approved boys and girls to play on each other’s teams, adopted after two years of study and a membership survey, in some circumstances. One passage specifically addresses transgender athletes.

Under the proposal, Gleim said any schools that included transgender women in their athletic programs would have to rewrite their policies.

The PIAA did not reply to a request for comment.

Lawmakers also presented a prerecorded video from one Connecticut high school athlete who filed a lawsuit challenging her transgender teammates and opponents in Feb. 2020.

Two young women who were introduced as Pennsylvania high school students stood in the press conference crowd, but did not speak, nor were they available for an interview.
Stephen Caruso is a reporter with the Pennsylvania Capital-Star where this story first appeared.