A "green mural" and a "dance mural" are new wrinkles in the Moving the Lives of Kids summer art program. | Features | Pittsburgh | Pittsburgh City Paper

A "green mural" and a "dance mural" are new wrinkles in the Moving the Lives of Kids summer art program. 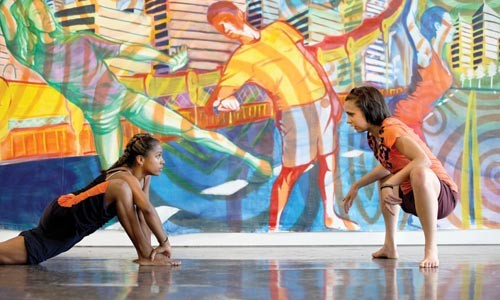 Painting a larger-than-life purple goddess and vegetation of prehistoric proportions on three sides of an apartment building is a good way to get people talking. Just ask Bonnie Schindler. She's artistic director for this nearly completed "green mural," a new amendment to this summer's Moving the Lives of Kids Mural Project.

The two-story building, on Omega Drive in Larimer, will eventually pop with live plants that Schindler and other artists will integrate into its painted design.

"There are people who, when you describe this area to them, think it's this house in the middle of nowhere," says Schindler. "But this building is so key. It's a community. I think [the mural] is a great reminder of that."

Though this is the third summer the MLK mural project has jazzed up Pittsburgh brick and concrete, it's the first time the murals have evolved beyond two dimensions. Also underway is a "dance mural," in which live performers will paint their bodies to give the illusion of having popped from a mural backdrop. A series of three dance-mural performances begins Fri., Aug. 7, at Dance Alloy Theatre.

"We just wanted to innovate. We wanted to see the art come to life," says MLK art director Lucas Stock.

The dance, titled "Outside Inside Out," addresses technology's effect on interpersonal relationships. The portable mural depicts larger-than-life kids shaded in greens, purples and oranges who bend and twist in front of a rainbow of skyscrapers. "[The dance] is about losing that one-to-one communication," says choreographer Greer Reed-Jones, Dance Alloy's artistic director. "It takes simple, pedestrian motions, like talking on your cell phone, and exaggerates them by adapting them to movement." The dance (performed indoors) combines break, hip-hop, jazz, African and modern styles.

The dance and green murals are just two of 20 in this summer's MLK project. The seven completed include an all-glass mural in Garfield, debuting Sept. 4.

The man behind it all is local artist Kyle Holbrook. Two summers ago, while working on a mural with "at-risk" kids, Holbrook realized that the art form had the potential to change lives.

"A couple of little trouble-makers were out there with me at 9:30 at night, quietly painting, just talking about life stuff, and I was giving them advice," said Holbrook, who over the past several years has led dozens of mural projects around town. "That's when it really clicked: ‘Man, this could be the perfect vehicle to really reach these kids.'"

This year, Holbrook selected 150 youths from 1,500 applicants. Holbrook wants to show them "there are other things out there besides basketball, drugs and rapping."

The murals are also used to teach life lessons. The green mural, for example, tells the story of Persephone, the Greek goddess of the harvest. Because she consumed a forbidden pomegranate while roaming the Underworld, she must become Hades' prisoner for three months every year.

The story teaches kids that "the consequences of your actions are super-real," says Schindler. "I think a lot of them have really connected with it."

The mural designs are by professional artists, but each design has negative space, which Holbrook reserves for the creative impulses of the youth artists.

"This isn't painting-by-numbers," Holbrook says. "I like people working together -- everybody doing a mural within a mural. I just like that energy." The fact that each mural's evolution is so publicly visible allows the project to "really do what art is supposed to do," says Holbrook. "It's making people stop and think and ask why."