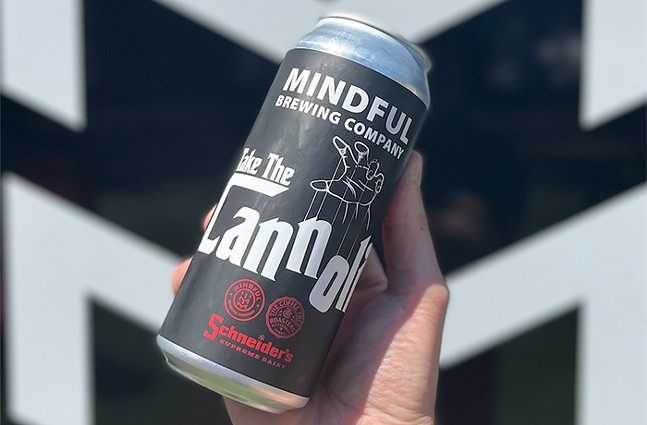 Photo: Courtesy of Mindful Brewing Co.
Take the Cannoli... and the Coffee from Mindful Brewing Co.
Wigle Whiskey/Threadbare Cider & Mead
wiglewhiskey.com/threadbarecider.com
Pittsburgh social media was aflame with outrage, jokes, and other reactions to Pirates owner Bob Nutting buying Wigle Whiskey and its sister company, Threadbare Cider & Mead. As reported by Pittsburgh Post-Gazette and other outlets, Nutting will "take over the Strip District distillery and North Side cidery/winery under the business name of Pittsburgh Spirits." The announcement comes not long after Wigle was ordered by the federal Department of Labor to pay nearly $39,000 in back wages to employees, according to a June 29 Pittsburgh City Paper story.

Turner Dairy Farms
turnerdairy.net
Turner's might be best known for their iced tea, but a new item is aimed at all the milk drinkers out there. The local company announced a new limited-edition Candy Bar milk flavor meant to evoke the classic Snicker's candy. Announced on Monday, the product is touted as being lactose-free and nut-free (it's made with artificial peanut flavor). Grab a pint or half-gallon container of it wherever Turner's is sold.

Armand's Bar
4755 Liberty Ave., Bloomfield
One of the last proudly smoker-friendly bars in Pittsburgh is, it appears, no more. Twitter user @pghisbeautiful lamented this with the tweet "RIP Armand’s" and an attached photo of the establishment's iconic sign. A Google search has Armand's listed as "Permanently closed." Farewell, and sorry I never tried your "Famous Fish Sandwich."

Square Cafe
134 S. Highland Ave., East Liberty. square-cafe.com
The unseasonably cooler August temps in Pittsburgh have people thinking about fall already. Square Cafe even announced that they have pumpkin spice lattes for customers who just can't wait until the leaves turn. Get one and sip it in the sun.

North Park Lounge
4717 Butler St., Lawrenceville. northparklounge.com
WPXI reported that the owner of Lefty's in the Strip will buy the Lawrenceville North Park Lounge, a bar that closed in July. According to a previous City Paper story, Lefty's was ordered to close in August 2020 by the Allegheny County Health Department for "breaking COVID-19 safety restrictions." North Park Lounge also has locations in Murrysville and McCandless.

Margaux
Penn Ave. and Highland Ave., East Liberty. margauxpgh.com
Margaux recently announced some new menu items influenced by summer flavors. The next time you go in for one of the bar's signature cocktails, try the Caprese toast with fresh mozzarella, tomatoes, and basil topped with a balsamic reduction and sea salt, or a Croque Monsieur croissant sandwich with ham, Swiss, and bechamel.

Abeille Voyante Tea Co.
211 Grant Ave., Millvale. abeillevoyanteteaco.com
Abeille Voyante wants to develop a fall menu with some feedback from customers. The company is calling on the public to suggest vegan dishes for a revamped list of food offerings. Hit them up in the DMs or on their website.

Sweet Alchemy
932 Fifth Ave. Suite D, New Kensington. sweet-alchemy-bake-shop-llc.square.site
Local vegan pastry lovers may have to hold off on getting their Sweet Alchemy fix for a bit. The shop announced that they would not accommodate any more custom orders for the month of August. They also announced on Instagram that they will be closed from Sun., Aug. 21-Sat., Aug. 27 and will also be closed from Sun., Aug. 28-Sept. 7 for vacation. You can at least catch them at Pittsburgh VegFest (scroll down for details.)

Penn Brewery
800 Vinial St., Troy Hill. pennbrew.com
The owners of Penn Brewery, touted as the oldest and largest craft brewery in Pittsburgh, are planning to retire. As a result, the business has changed hands. On Aug. 9, CBS Pittsburgh reported that the brewery has been sold to Stefan Nitsch, a local businessman who also owns Arkham Realty.

Photo: Courtesy of Wings Over
All-New Cheesy Bacon Chicken Menu from Wings Over
Wings Over
2525 E. Carson St., South Side. order.wingsover.com
If you can never get enough bacon, cheese, or fried chicken, Wings Over will absolutely destroy you with all three. On Aug. 15, the chain, which has a location in Pittsburgh's South Side, released its All-New Cheesy Bacon Chicken Menu. The menu includes Cheesy Chicken Loaded Nachos, a batch of waffle fries or tots with "hand-breaded crispy chicken tenders, smothered with melted cheese, and crispy bacon," and Loaded Tender Sandwiches, featuring the chain's "signature crispy tender on a top-split, butter-toasted bun, smothered with melted cheese and crispy bacon."

Mindful Brewing Co.
3759 Library Road, Castle Shannon. mindfulbrewing.com
Little Italy Days has inspired a new beer from Mindful Brewing Co. The brewery announced Take the Cannoli... and the Coffee, a dark sour developed in collaboration with Schneider’s Dairy and Coffee Tree Roasters. A press release describes the beer, the name of which comes from a famous line in The Godfather, as being made with Schneider's dairy culture and fresh coffee, and "infused cinnamon, allspice, and vanilla extracts." It's now available to buy in time for when Little Italy Days takes over Bloomfield.

Hidden Harbor
1708 Shady Ave., Squirrel Hill. hiddenharborpgh.com
On Wed., Aug. 24, Hidden Harbor will throw a 500 Rums Party celebrating its recent 500-rum milestone. Guests can get 50% off full pours of every single bottling from 5-7 p.m. and 25% off for the remainder of the night. Reservations for the event will become available on a rolling basis. Watch the bar's social media channels and website for more info.

Pittsburgh VegFest
301 East Ohio St., North Side. pittsburghvegfest.org
One of the biggest events for vegans and vegetarians returns on Sat., Aug. 27 with live music, shopping, speakers, and, of course, food. Sample everything the festival has to offer, including meeting cute animals, trying meat-free treats, learning about plant-based diets, and more.

Pittsburgh VegFest continues to grow with food, fun, and a new VIP experience