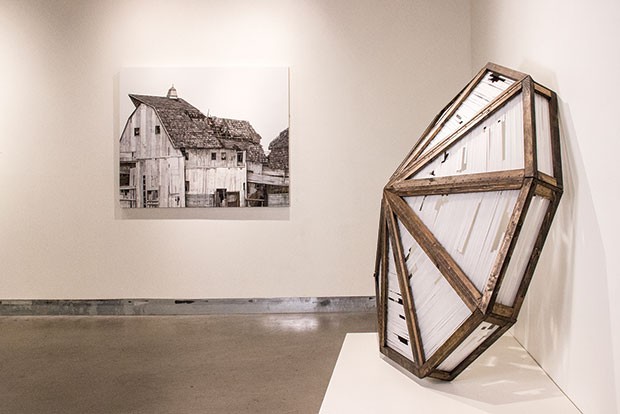 Architecture should be both useful and aesthetic. In Dissolution, an exhibit at Pittsburgh Glass Center, Seth Clark and Jason Forck explore what becomes of the aesthetics when architecture’s utility is lost to decay.

Forck is a glass artist, and most Pittsburgh gallery-goers are familiar with collage artist Clark’s distinctive works depicting collapsing structures, which have been widely exhibited here in recent years. The two teamed up for a year-long Glass Center residency inspired by the “Americana landscape and the concept of abstraction through decay,” according to press materials.

The first thing you’ll see in the gallery is a false wall with a hunk of plaster clawed away to expose glass “lathe” (two layers of it). It’s a clever opening move that gets you thinking about what it means when one material imitates another in form, if not function.

The basic sculptural shape-unit of Dissolution, however, is what Clark and Forck call a “rooftop,” or what I’d term a cupola — the small, often domelike structure that crowns a building’s main roof. We typically associate cupolas with older architecture, like barns and Victorian houses; many of Clark and Forck’s rooftops incorporate spires, like you’d find topping a church.

About one-third of the show’s 27 works employ the cupola at various scales, from tabletop to life-size (think 8 feet tall or more), on pedestals of varying heights. Most of the cupolas are tipped on their sides, exposing the interior bracing. But with the majority of them, the most notable element is that instead of wooden slats or shingles, these cupolas are clad in kiln-formed or furnace-worked glass. Variations include, in place of glass shingles, a single layer of glass almost lacily porous. Another piece, “Gambrel Rooftop,” is a miniature that wittily reverses the formula, with trusses of networked glass supporting wooden roofing. 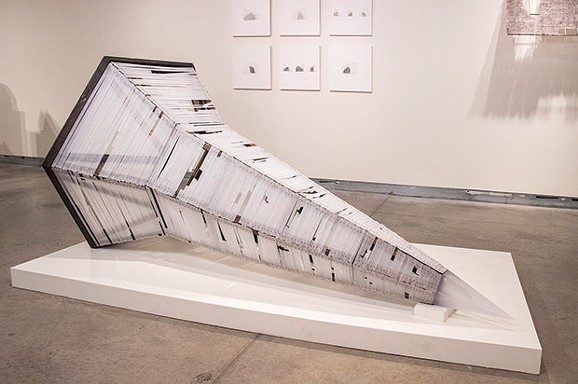 Most of the rooftops are credited to Clark. He and Forck collaborated on “Canopy,” a wall-hung steel-framed structure with tiny glass shingles (dusted with cinders) and big patches “rotted out,” as if by water damage. Forck gets solo credit for several works exploring similar motifs. These include “Collapse,” a series of three tabletop-scaled, barely translucent glass sheds — one whole, one crumbling, the third collapsed, its roof colored to suggest corroded tin. Forck also contributes the amusing “Perilous,” in which a tiny glass barn perches atop an 18-inch-tall stack of little glass slats balanced precariously, Jenga-like. (You won’t want to sneeze nearby.)

The show also features three of Clark’s “barn” collages depicting structures in varying states of collapse. From three steps away, these large-scale works look like paintings, but really they are cunning mixed-media assemblages of paper and other fibers, variously marked, textured and colored with charcoal, pastel, acrylic and graphite. Each shingle on each decaying barn is handcut, echoing the shingles on many of this exhibit’s pieces done in glass and wood; Clark’s collages memorialize leaning walls and caved-in roofs while palpably evoking sun-silvered wood and bleached-out siding.

While all these works are pleasing and finely crafted, the notion of “abstraction” here is rather subtle: Most pieces in Dissolution are basically representational. Their wit resides in how substituting an unlikely material for its real-world counterpart gives the impression that glass, for instance, might decay like wood — or in how delicate sticks of wood, once splintered, suggest the fragility of glass.

There’s a bit more standard abstraction in “Silo,” a 4-foot-tall mock grain silo made of wire fencing and filled with shards of clear glass, all tucked beneath a roof of delicate glass tiles; it suggests the “Americana” motif in a slightly jarring way (replacing foodstuffs with sharp, crunchy leaves of glass). But the show’s strain of abstraction, as well as its collaborative aspect, is best exemplified, aptly enough, by the four co-credited works titled “Dissolution.”

All four pieces incorporate hand-blown glass along with glass that’s slumped, or formed in a kiln over a mold at high temperatures. The gallery’s rear wall is dominated by one such work, a large-scale installation of 30 sizable shingles in three rows, the lower 10 with ragged bottom edges; within each rectangle are embedded paper-thin shards, ranging in color from white to cola-dark, the darkness migrating toward the work’s upper right corner, a powerful statement. When viewing two other “Dissolution” works, side-by-side panels, look close to see the fascinating fissures, scratches and bubbles, artifacts (one supposes) of the glass’s very formation.

In “Dissolution, Triptych,” I got a different buzz: Gazing into these three densely layered panels, I felt a sense of arrested chaos, as though observing a freeze-frame of the moment when the bomb takes out the storefront window: scattered debris suspended thickly in the air. I doubt it’s what the artists intended, but it was certainly memorable.

Center for Creative Reuse has a Secret Show

Costumes from The Wiz, contemporary art from Brazil, the Frick explores its own collection, and much more