If you’re craving a classic old-school farce with great songs by Stephen Sondheim, Pittsburgh Public Theater’s new production will do 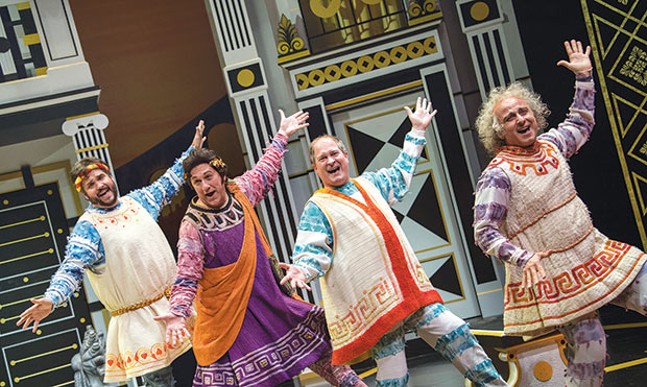 Photo courtesy of Michael Henninger
Left to right: Jimmy Kieffer, Jeff Howell, Gavan Pamer and Stephen DeRosa in A Funny Thing Happened on the Way to the Forum, at Pittsburgh Public Theater

Few opening songs advertise their show more truly than “Comedy Tonight.” “Nothing with kings … nothing with fate,” indeed: The lead number of A Funny Thing Happened on the Way to the Forum promises “something for everyone,” as long as it gets a laugh. And if you’re craving a classic old-school farce with great songs by Stephen Sondheim, that’s what Pittsburgh Public Theater’s new production will do.

What puts it over the top, though, are Sondheim’s sparkling melodies and sublime lyrics, in songs like “That’ll Show Him,” in which Philia tells Hero that she’ll get revenge on Miles (who’s bought her) by canoodling with him, because she’ll really be thinking of Hero: “I’ll kiss him morning and night — / That’ll show him!” The pleasures range from Pseudolus’ sardonic ode to liberation, “Free,” to the cheerful lechery of “Everybody Ought to Have a Maid.”

The cast of 18 features Jimmy Kieffer, splendidly conniving as Pseudolus. Other standouts include Gavan Pamer as the fretful Hysterium, and Stephen DeRosa as “That Dirty Old Man,” Senex.

Admittedly, a musical farce set in ancient Rome, and written by mid-20th-century guys (even if one them’s Sondheim) isn’t your stop for roles for empowered women: Most of Forum’s female roles are courtesans, who are appropriately stunning but haven’t a line of dialogue between them. Ruth Gottschall’s delightful Carol Burnettish turn as Domina partly redeems that deficit as someone who ensures that the men in this man’s world get the ribbing they deserve.