"Here it is, one of the most outrageous crime stories of all times in Pennsylvania, and no one's written this?"

In 1969, a Tarentum man named Stanley Hoss transformed himself from small-time thug to the target of a federal manhunt. Jailed for rape, Hoss had escaped and shot and killed Verona police officer Joe Zanella. Hoss, 26, then abducted a young Maryland woman and her 2-year-old daughter and fled west; he was captured in Iowa, but their bodies were never found. In 1973, Hoss was serving a life sentence for Zanella's killing when he conspired with two other white inmates at Western Penitentiary in the brutal, racially motivated killing of African-American prison guard Walter Peterson.

Hoss was still a household name in 1975, when Jim Hollock began his career as a counselor and counselor supervisor at Western Pen. Hollock never met Hoss (who hung himself in Philadelphia's Graterford Prison, in 1978). But in 1997, Hollock began the decade of research that culminated in April's publication of Born to Lose (Kent State University Press), a painstakingly detailed account of Hoss' crime spree and journey through the courts and prison system. The title quotes Hoss' tattoo; the narrative features names like Richard Thornburgh (then a federal prosecutor, later governor) -- and Edgar Snyder, the locally famed personal-injury lawyer who four decades ago was Hoss' public defender.

Hollock, 62, is retired and lives in Observatory Hill. He recently spoke with CP. 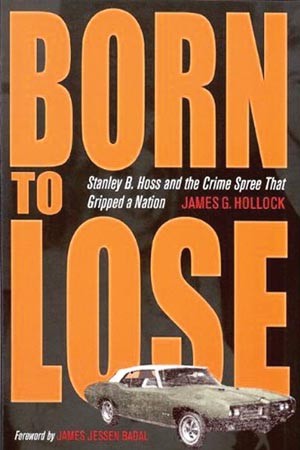 Why write about Hoss?

I always wanted to be an author, and you've heard "write what you know." I thought, "Well, I know criminals at least. I know the system." … And here it is, one of the most outrageous crime stories of all times in Pennsylvania, and no one's written this?

Was Hoss really that famous?

[Hoss's spree] covered a lot of years and a lot of crimes that were so appalling because of the victims -- they were just beautiful people, all of them. It was like the devil killing angels.

How did you persuade Hoss' wife to talk to you?

I really had to talk my way in. This was 30 years afterwards. She said, "I always knew someone like you would show up here." … [But] she said, "I don't want to talk about this, ever."

Couple days later, the phone rings. Her husband [had told her], "Look, you call that man back and you talk to him. Get this thing outta your chest." … [Later,] she came to my first book-signing.

And she provided dozens of Hoss' letters.

It was tremendous stuff, and right from his mouth. It can be sweet talk, it can be mush, but if he's not getting what he wants, violent, threats, vulgarities.

Do you feel like you have insight into Hoss?

[Hoss] didn't care about consequences. So he'd kill ya. That's a dangerous man. Now you want to get really deep into it -- why didn't he care? I don't think he cared if he did live or die.

You might say Hoss brought it back. … He's absolutely part of the reason we have the death penalty today in Maryland and Pennsylvania.

How is the book doing?

The sales are really really brisk. They're being also picked up by the library systems of universities. It's in 30 libraries in Allegheny County. They're all out, and each library has a waiting list. I'm very excited about that.

When he saw the girl and her baby come out of the store, Hoss got out of the white Chevy, taking with him the items he wanted. He wouldn't be returning. The J.C. Higgins revolver was stuck in his waistband. He gauged his gait to arrive at the GTO at the same moment as the mother and child.

Linda had reached the driver's side of her car. Letting go of Lori Mae's hand and putting her purchases on the ground so she could open the car door, she was surprised to see a man come out of nowhere, standing not two feet from her. Linda's back was to her driver's door, and Lori Mae was standing beside her. The man faced her, standing altogether too close for someone she did not recognize. Before she could blink, the man threatened, "If you open your mouth, I will blow your head off." It was only then that Linda saw the gun. He held it low, at his belt. She grabbed for Lori Mae's hand. "Hear me?" the man said. "I'm not playing around. Get in the car."