CP Photo: Jared Wickerham
Jeff Crehan, dressed as Tarmar from theReturn of the Living Dead movie, poses outside the Living Dead Museum inside the Monroeville Mall, the location of Dawn of the Dead
On the big screen, Pittsburgh has played host to superheroes and river cops, face-stealing psychopaths, aspiring dancers, struggling professional basketball teams and minor-league hockey teams, and more than a few flesh-eating zombies. Here are a few of our favorite local landmarks where famous Pittsburgh movie moments went down.

The ambling undead of George Romero’s zombie franchise are the benchmark upon which all other zombie films are measured. And while 1968’s black and white Night of the Living Dead is where it all began, 1978’s Dawn of the Dead is the high water mark, a terrifying film in which the dead return to feast upon the living, and a critique of mindless consumerism. It was filmed almost entirely inside the Monroeville Mall, and a new, paid-entry Living Dead museum just opened inside the shopping center in June, filled with movie memorabilia and relics of this cult classic and others. (Easter Egg: the Pittsburgh-filmed Zack and Miri Make a Porno includes a nod to this flick in the form of Seth Rogan’s hockey team, the Monroeville Zombies.)

Snoochie boochies, dude. The Catholic League (and some 30 other groups) called for a boycott of this flick, which the Los Angeles Times called “a raucous, profane but surprisingly endearing piece of work.” Why? The Kevin Smith comedy features Ben Affleck and Matt Damon as fallen angels looking to re-enter heaven through a loophole in doctrine, courtesy of a new Catholic movement fronted by a thumbs-up, winking version of Jesus, pushed by a Cardinal played by George Carlin. The climactic final scene happens on the steps outside the long-vacant St. Peter and Paul Church in East Liberty. It’s the last thing you see before the credits. 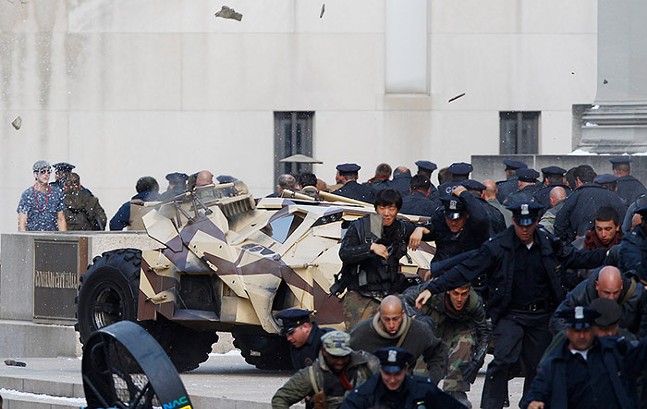 CP photo: Jared Wickerham
Hundreds of extras act out a scene when the Batmobile drove up the steps of the Institute with shrapnel flying in the air from an explosion during the filming of Dark Knight Rises on July 31, 2011.

One of the biggest blockbusters ever filmed in the city, the third Batman film of the Dark Knight trilogy features a number of climactic scenes that are recognizably Pittsburgh, from the Downtown chase scene to the football game at Heinz Field in which a yawning chasm opens up to swallow a football team and a kicker who, for some reason, was played by then-Pittsburgh Mayor Luke Ravenstahl. We recommend CMU’s Mellon Institute, whose austere Ionic columns serve as Gotham City Hall and the backdrop for when Bane (played by Tom Hardy) calls for Blackgate Penitentiary to be stormed.

The works of August Wilson, Pittsburgh’s playwright laureate and chronicler of everyday Black life in Pittsburgh’s Hill District, are enjoying a resurgence in popular culture. This film, based on the sixth in Wilson’s “Pittsburgh Cycle” of ten plays, was directed by and stars Denzel Washington. (Wilson’s Ma Rainey’s Black Bottom, which featured both Chaswick Boseman and Viola Davis, was shot in Pittsburgh in 2019, though mostly on a soundstage, and as a stand-in for 1920s Chicago.) It’s important to remember that 100 acres of the Lower Hill were torn down in the 1950s to make way for the Civic Arena, displacing and diminishing some of the neighborhood that once rivaled Harlem and Bronzeville as a cultural hub. All that is to say, only a few places in the Hill were actually included in the movie (shoutout to Shirl the Pearl’s), with many of the local scenes being shot in Pittsburgh’s West End instead. We recommend heading to the County Courthouse for an up-close look at “Industry,” one of five Vincent Nesbert murals, painted during the Works Progress Administration and whose steelworkers are the subject of a long-panning shot that establishes a scene inside the courthouse itself.

You already know the iconic scene from Stephen Chbosky’s angsty coming-of-age film based upon his novel of the same name. Actor Emma Watson’s character stands in the back of a pick-up truck barreling toward the Fort Pitt Bridge, Bowie’s “Heroes” blaring, arms outstretched, yearning for freedom and release more than any movie character coming through a tunnel since Tim Robbins’ character at the end of Shawshank Redemption. We recommend the view, but not the act itself; instead, head to the West End Overlook. Often, uh, overlooked for the more popular views along Grandview Avenue in Mount Washington, it’s sometimes where the characters would hang out after school.

Some places, you don’t want to see change. West Mifflin’s Kennywood, the 122-year-old, self-proclaimed “Finest Traditional Amusement Park in America,” possesses a timeless charm that made it the perfect stand-in for a well-worn theme park in this 2009 teenage coming-of-age film. Kristen Stewart’s character worked the milk bottle game by the wooden 101-year-old Jack Rabbit roller coaster, which, to us, is the beating heart of Kennywood. After a century, purists still debate whether or not the front or back seat provides the most memorable experience. We say: try both, and then decide ¯\_(ツ)_/¯.

Maybe the most terrifying psychological horror film ever made, Silence of the Lambs was filmed in and around the Steel City, most famously the University of Pittsburgh’s enormous Beaux-Arts Soldiers and Sailors Memorial Hall, which played host to the iconic scene in which Hannibal Lector, played by the inimitable Anthony Hopkins, escapes his holding cell. Other spots include the Carnegie Museum of Natural History, as well as the old Moxley’s Drug Store on the corner of Eighth and Amity in Homestead.

Jeff Goldblum travels back to Pittsburgh, his hometown. (Calm down, West Homestead, we know he’s really yours.) It is Pittsburgh, and yet it isn’t. It’s a mockumentary where actors play themselves and reality isn’t what it seems. This is Jeff Goldblum’s world. We are all just living in it.