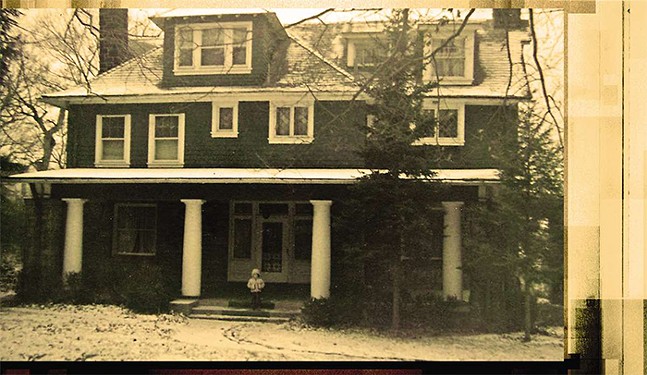 Image: Penguin Random House
Photo from the cover of The Demon of Brownsville Road
Pittsburgh may be known for zombies thanks to its connection to Night of the Living Dead and its sequels, but the city also boasts some pretty terrifying ghost stories. And one of the most notable ghost stories was just picked up by New Line Cinema and is set to become a film.

According to reports by Deadline and Bloody Disgusting, New Line Cinema, a company built on the success of horror classic Nightmare on Elm Street, bought the rights to the nonfiction book The Demon of Brownsville Road.

Published in 2014, the book recounts co-author Bob Crammer's experiences with an evil presence that tormented him and his family in their home at 3406 Brownsville Road in Brentwood borough in the South Hills. A synopsis from the book's publisher Penguin Random House reads that Crammer, his wife, Lesa, and their four children were experiencing "strange phenomena — objects moving on their own, ghostly footsteps, unsettling moaning sounds — that gradually increased in violence, escalating to physical assaults and, most disturbingly, bleeding walls." This was after Crammer, a Pittsburgh native, bought the property in 1988.

While events outlined in the book have been disputed by some, including former residents who, in a 2014 Pittsburgh Post-Gazette article, claim the house was perfectly unhaunted, that hasn't stopped Brownsville Road from becoming a paranormal fan favorite. But don't whip out your EMF meter just yet — in 2019, Crammer converted the site into a bed and breakfast, telling Trib Live that it was "clean" of evil entities and has a "Downton Abbey" feel.

New Line announced that it already has a writer for the project in newcomer Minnie Schedeen. A director has yet to be announced.