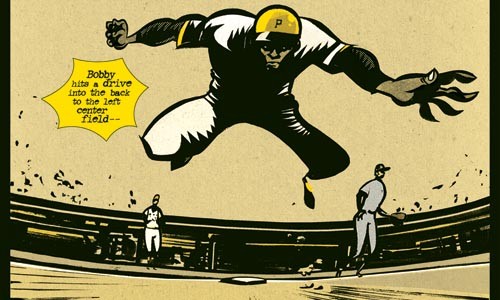 Double time: Roberto Clemente heads into second for his 3,000th hit, as rendered by Wilfred Santiago.

The spirit of Roberto Clemente hovers over Pittsburgh like a spell. Nearly 40 years after his death, he occupies a singular place in baseball lore: renowned for his hardball skills, revered for his humanitarianism, respected for pioneering the Latinization of the game. He's also likely Pittsburgh's most written-about athlete.

Writer-cartoonist Wilfred Santiago grew up in Ponce, Puerto Rico's second-largest city, but was too young to have witnessed Clemente roam the outfield at Three Rivers Stadium (much less Forbes Field). In his new graphic novel 21: The Story of Roberto Clemente (Fantagraphics Books), the author of 2002's In My Darkest Hour uses Clemente's life to explore issues on and off the diamond. These include the thorny politics of Puerto Rico (statehood or commonwealth status?) as well as the racism Clemente faced in America as a dark-skinned Latino. The result is both a superhero cartoon and a lyrical time-machine, rendered in the regal black-gold-and-white of the Bucs' uni.

Santiago first visited the mainland U.S. when he was around 7. "I came to Disney World and thought the whole country was going to be like that," he says, laughing. "I couldn't wait to come back." He left P.R. in 1991 and hasn't returned. Now 40, he has lived in Chicago since 1997. City Paper spoke with him by telephone about Clemente, Pittsburgh and the art of the graphic novel.

Growing up, what do you remember most about Roberto Clemente?
There's always been a big emphasis on the way he died. Being from Puerto Rico, a place of serious religious faith, this had a big significance. You always heard more about that than his ability as a baseball player.

You don't illustrate the 1972 plane crash that killed him. Why not?
I didn't want to focus too much on his death. I mean, you could say he died a hero's death, but I think most important is that he lived a hero's life. That's the part I really wanted to show in the book.

What research material did you draw from?
Mostly photographs from old newspapers and magazines, trying to soak in the character of the times. It was difficult to find footage of Clemente playing. I heard that they recently found footage from the 1960 World Series [filmed by former Pirates owner Bing Crosby]. I would have loved to have seen that before writing 21.

Did you feel limited by using only the colors from the Pirates uniform?
I always loved that color scheme. When I first came to the U.S. to live, I fell in love with football. The Pittsburgh Steelers were my favorite team, not for any particular reason but the uniforms. I just like the combination so much. The relationship between the yellow, the black and the white is such that it's great to experiment with them. It wasn't limiting at all. I felt very free. I didn't need any other colors. 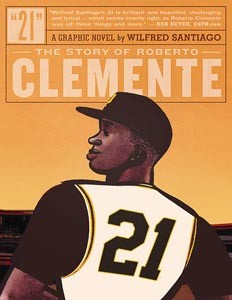 Your illustration of the steel mills in Pittsburgh echoes the way you depict the sugar cane fields in Puerto Rico. How are the two places alike?
They're two supposedly very different places and cultures. At the end of the day, these are two fuck-ass hard jobs: cutting sugar cane in 100-degree heat, from sun-up to sundown, and working in the steel mills all day long. I wanted to see if I could connect those scenes, because I like the contrast between the rural setting and the industrial setting. I didn't know much about Pittsburgh before, but I really enjoyed learning about the city and how it was built.

The drawing of Clemente diving into second base for his 3,000th hit makes him seem larger-than-life. What were you trying to do with that?
I began my career working on superhero cartoons. That's the look I wanted to get -- somewhere between a cartoon and a painting. I wanted to get the camera right there with him and you're experiencing the action up close.

Are you ready to do a graphic novel about the Steelers? Maybe Franco Harris and the Immaculate Reception?
That would be exciting. I haven't seen a football comic book, so who knows?