A diverse collection of work by Czech photographers at Space spans several eras. 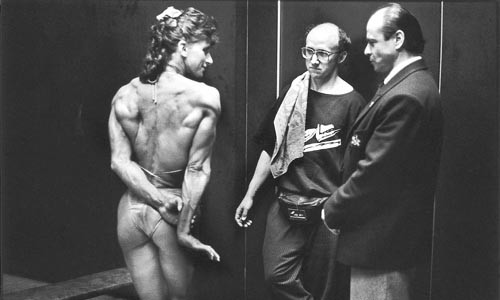 The 11 photographers in Czech It, at Space Gallery, represent more than 80 years of Czechoslovakian photography and span the gamut from documentary to conceptual. In a country that has been impacted by war, Communism and revolution, the works speak volumes about the sociopolitical climates of each photographer's generation.

In the 1920s and '30s, for instance, Czech photographers were at the forefront of the avant-garde. The Republic of Czechoslovakia had declared its independence in 1918, and the democratic nation included some of the most industrialized areas of the former Austria-Hungary. Jaromír Funke (1896-1945) developed a documentary style and grew interested in modernist ideas. He began to make clearly focused studies of simple objects that emphasized form, light and shadow. The sepia-toned images at Space include one depicting two oranges on a piece of glass, shot up close to subordinate identity and highlight abstraction.

A contemporary of Funke's was Eugen Wiškovsky (1888-1964), whose work embodied ideas of New Objectivity. The goal was to archive the visual world, emphasizing close observation and sharply focused images. In one photograph on display, a stack of pipes cut diagonally through the frame in a dramatically composed image of the banal.

Also represented in Czech It is Jundřich Štreit. Streit documents the period before the collapse of Communism with images of villagers, taken in the 1980s and '90s, that represent struggle and, unexpectedly, joy. A weathered man and woman, she in babushka and slippers, he in aged work clothes, seem a throwback to a century long past, yet both laugh as she gives him a giant bear hug. In another image, a man and woman, laboring together carry a massive wooden beam on their shoulders, each seemingly unaware that the other faces the opposite direction. Streit was arrested for his photographs in 1982 and was subsequently banned from taking pictures.

Streit is also a common denominator for the show's curators, Jen Saffron and Eva Heyd. Saffron, a Pittsburgh photographer and independent curator, attended a workshop with him, in 1995, at the Prague House of Photography, where Heyd is director.

Also at Space, Štěpan Grygar and Dana Kyndrova, both born in 1955, exhibit works made predominately in the 1990s. Grygar's conceptual images -- a sequence documenting a ball covered in detritus -- are a world apart from Kyndrova's photographs from the project "Woman." The theme of "being looked at" is seen through a lens that is feminist, humorous and strange. In one a woman at a sink in rubber gloves poses sexily for two men watching her voyeuristically; in another, a female body-builder models for two men who seem to be surveying her as if she were livestock.

Photographers born in the 1960s and '70s round out the exhibit, including Kristyna Milde, Kateřina Držková, Petra Malá and Alena Kotzmannová. Of particular interest is "Reason for Divorce I-XIII," (1999) by Michal Pěchouček, who continues the voyeuristic theme in a sequence of "surveillance" photos in which the photographer gets ever closer to a couple in a row boat; in the last image the photographer is being watched by someone else.

Evžen Sobek's "Life in Blue I-VIII" (2006-2008), meanwhile, represents a different Czech world in which people leisurely fish, boat or picnic at a shore. A girl stands in the water with a large mastiff on a leash, neither making a wave in the water. The stillness and quietness of these photos seems to gainsay all the activity. As in the show's aforementioned renditions of steel pipe, peasants and voyeurism, things are presented as normative, yet they feel just a little off. And Sobek's photos, in particular, suggest a country where "normal" is not quite what we expect it to be.